The growing transgenderization of American children is unscientific, unsupervised, and out of control, according to an op-ed prominently published Sunday by the Washington Post.

“The treatment pushed by activists, recommended by some providers and taught in many training workshops is to affirm [teenagers’ claims of transgender identity] without question,” says the op-ed by two loud advocates of the transgender ideology, psychologist Laura Edwards-Leeper, and Erica Anderson, who says she is transgender.

“We may be harming some of the young people we strive to support — people who may not be prepared for the gender transitions they are being rushed into,” the two authors wrote.

The article was given a very prominent position — three-quarters of the first page in the Washington Post‘s prestigious Outlook section on Sunday, November 28.

The top-level support for the article suggests the Post‘s editors are alarmed at the growing damage from transgenderism — even as they also publish a flood of relentlessly pro-transgender articles in other parts of the newspaper.

The growing damage has been carefully covered by Breitbart News for at least five years. On November 27, for example, Breitbart News reported Swedish pro-transgender doctors caused serious injuries to many kids: “It’s chemical castration. It can affect mental health in a way that you didn’t think of and didn’t want.”

That coverage has helped ordinary Americans debate the issue, and to pass laws in state legislatures that protect K-12 children from transgenderism in school sports.

But elitist progressives in the media, in activist groups, and in universities have suppressed the scientific, medical and political debate because of their contempt for ordinary Americans.

The Post‘s surprising approval of the critical op-ed by two pro-transgender activists may allow progressives to admit the damage being caused to their own children. The two authors wrote:

The constituency of agitated parents who feel excluded is also growing rapidly. These are not conservative evangelicals who don’t believe trans people exist or deserve treatment. They’re usually progressive, educated, loving people who all say, If our kid is really trans, we’ll fully support them. We just want to be as sure as possible, and we can’t find a provider who will actually engage in gender exploring therapy. Instead, doctors and psychologists and social workers are ready to start hormones after one short visit. 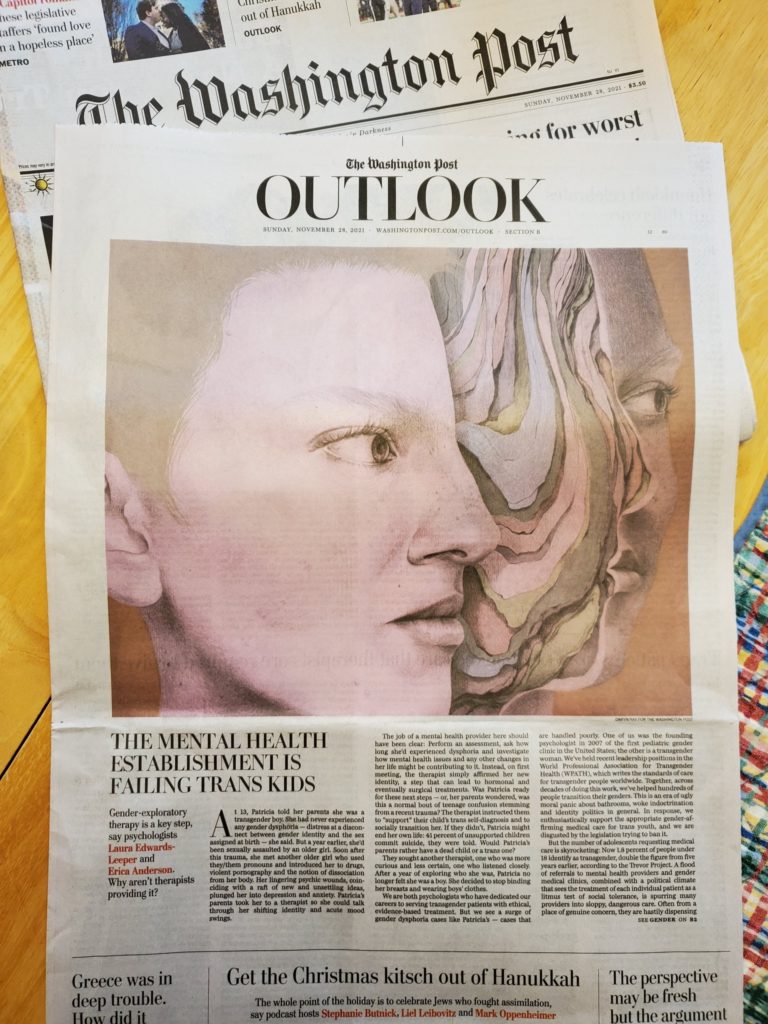 Many children who claim transgender status are seeking a sexless refuge from the shock of puberty, from porn-twisted teenage attitudes, and from the progressives’ reckless destruction of the civic rules that once protected children from pressure for early sexual activity. Also, many of the kids who are pulled into lifetime cycles of transgender medical treatments are sexual minorities who would otherwise grow up to be lesbian or gay.

But the two authors are only trying to rein in professional abuses that threaten their business and advocacy, not to argue against transgender demands.

Slowing down the [rush by some young people to hormone use and cosmetic surgery] and encouraging deeper, thoughtful exploration is considered, many [pro-transgender professionals] tell us, unnecessary and unaffirming. Providers may also be afraid of being cast as transphobic bigots by their local colleagues and referral sources if they engage in gender exploring therapy with patients, as some have equated this with conversion therapy. We’ve personally experienced this backlash at professional conferences.

When working in gender clinics, we’ve also both received letters from therapists who had “assessed” patients they were referring to us. An astonishing number of these were nothing but a paragraph that stated the youth identified as trans, had dysphoria and wanted hormones, so that course was recommended.

The pressure by activist medical and mental health providers, along with some national LGBT organizations to silence the voices of detransitioners [people who give up their transgender claims] and sabotage the discussion around what is occurring in the field is unconscionable.

The oped was published as recent polls showed growing public opposition to demands by transgender activists — and by growing evidence that damaged kids may soon start suing the doctors and activists who approved the transgender treatments.

In general transgender activists demand Americans should surrender their recognition that men and women are biologically different, and instead agree people should be treated as whatever sex they prefer that day.

In contrast, most Americans say the male-or-female biological differences are inescapable, complementary, valuable, and must be recognized by the nation’s culture and laws.

For example, Americans are trying to protect single-sex sports, bathing facilities, spas, toilets, jails from the elite support for transgenderism.

This elite support in government and the media for transgenderism has encouraged activists to insist that children, men, and women be freely allowed to change their legal sex, regardless of damage to society, ordinary Americans, or even to the kids who claim to be transgender.

I can’t watch this. I hope that she is okay and that who ever encouraged this understands the magnitude and consequences. https://t.co/kwbkP2CKNU