A compliance document filed with the Internal Revenue Service by the Mark Zuckerberg-funded Center for Technology and Civic Life (CTCL) confirms the nonprofit spent $332 million in “grants and other assistance to domestic organizations and domestic governments” in the 2020 election to “increase civic participation by modernizing engagement between local gov[ernment] and the people they serve.”

As Breitbart News reported in October 2020, “Facebook founder and CEO Mark Zuckerberg announced on Tuesday that he and his wife have donated an additional $100 million to a ‘safe elections’ project run by the non-profit Center for Technology and Civic Life (CTCL), bringing their total contributions to that project to $350 million since September 1.”

Biden was inaugurated as the 46th President of the United States on January 20, 2021, after a Joint Session of Congress on January 6, 2021, affirmed his 306 to 232 Electoral College vote victory over former President Donald Trump in the November 3, 2020, general election.

The Capital Research Center uncovered the compliance document and reported on it Thursday.

$350 million of that $354 million was provided by Mark Zuckerberg and his wife, Priscilla Chan, as Breitbart News reported in October 2020, just weeks before the November 3, 2020, general election between President Joe Biden and former President Donald Trump.

Prior public statements by CTCL have identified Facebook founder and CEO Mark Zuckerberg and his wife Priscilla Chan as the two individuals who donated that $350 million.

In Thursday’s report, the Capital Research Center provided more information on the specific mechanisms used by Zuckerberg and Chan to make that $350 million contribution to CTCL in 2020:

New discoveries reveal that Zuckerberg funneled $328 million through the Silicon Valley Community Foundation, the largest community foundation in America and a notable donor to left-wing causes. Zuckerberg is perhaps the single largest donor to the foundation, dumping close to $2 billion into the pass-through since 2010.

The list of grant recipients is voluminous and requires more than 130 pages on the CTCL’s Form 990. This document reveals, for the first time, the full depth of the CTCL’s involvement in “local election administration” in the 2020 election. 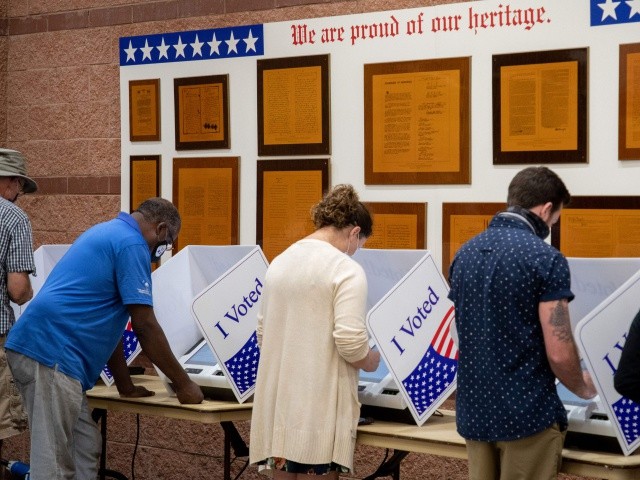 TOPSHOT – Voters cast their ballots in the voting booths at the early vote location at the Charleston Coliseum and Convention Center in North Charleston, South Carolina on October 16, 2020. – Many states across the country have seen record turnout for early voting for the 2020 election. (Photo by Logan Cyrus / AFP) (Photo by LOGAN CYRUS/AFP via Getty Images)

To date, the Capital Research Center, Breitbart News, and other media outlets have pieced together CTCL’s involvement in the 2020 election based on incomplete data provided by CTCL combined with public reports in local news outlets. Capital Research Center noted it has published reports on CTCL spending in nine states: “Arizona, Nevada, Georgia, Pennsylvania, North Carolina, Texas, Michigan and Wisconsin, and Virginia,” and added in its Thursday report it believes those state reports “will be confirmed in the coming weeks” after the CTCL’s Form 990 is completely reviewed.

CTCL was not the only beneficiary of Mark Zuckerberg’s largesse in 2020.

As Breitbart News reported in December 2020, another nonprofit, the Center for Election Integrity and Research (CEIR), received $69 million in contributions in 2020 from Zuckerberg and his wife in 2020:

A report released by the Amistad Project of the Thomas More Society at a press conference on Wednesday alleged Facebook founder Mark Zuckerberg and his wife made $419.5 million in contributions to non-profit organizations during the 2020 election cycle–$350 million to the “Safe Elections” Project of the Center for Technology and Civic Life (CTCL) and another $69.5 million to the Center for Election Innovation and Research–that, “improperly influence[d] the 2020 presidential election on behalf of one particular candidate and party.”

“The 2020 presidential election witnessed an unprecedented and coordinated public-private partnership to improperly influence the 2020 presidential election on behalf of one particular candidate and party. Funded by hundreds of millions of dollars from Facebook founder Mark Zuckerberg and other high-tech interests, activist organizations created a two-tiered election system that treated voters differently depending on whether they lived in Democrat or Republican strongholds,” Amistad Project Director Phill Kline wrote in the report’s executive summary.