Democrats are starting to admit they are losing ground with Latino voters with time running out before the upcoming election, according to a recent report from Politico.

“Latino Democratic leaders and operatives are increasingly worried that time is running out to do anything that would make a significant difference ahead of the 2022 midterms,” the Politico report admitting, noting that to keep the majority in the House and Senate, the Democrats will need a “robust Latino turnout.”

Politico acknowledged that during the last presidential election, former President Donald Trump made massive gains with the Latino community across the country, which became alarming to the Democrat party as “there’s a creeping fear that the traditional Democratic advantage with Latino voters will continue to erode in November.” 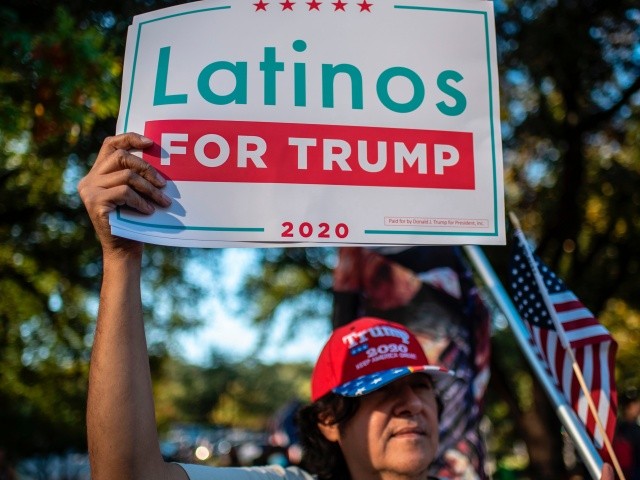 A man holds up a “Latinos for Trump” sign at a protest after Joe Biden won the 2020 presidential election in Austin, Texas on November 7, 2020. (Photo by SERGIO FLORES/AFP via Getty Images)

The founding president and CEO of Voto Latino, Maria Teresa Kumar, admitted to Politico, “Intellectually, Democrats know they have a problem. But I haven’t seen the investment that needs to happen for it to translate.”

Latinos — the largest of the nation’s fastest-growing demographic groups — have long been viewed as solidly blue Democratic voters. While President Joe Biden captured the majority of the Latino vote in 2020, Trump improved his margins in 78 of the nation’s 100 majority-Hispanic counties.

Since then, a spate of reports, analyses and polls have made it clear that the party has reason to worry if it doesn’t change its current approach. A recent report by Democratic research firm Equis found that a majority of Latinos believe that Democrats take them for granted. It also found that Trump’s policies on the coronavirus pandemic and economy were popular among Latinos and that GOP attacks claiming Democrats embrace socialism have been effective.

An analysis of the Democrat voter data from Catalist found that in 2020, Trump increased his 2016 gains with the Latino voters in 2016 by eight percent, even though the final data showed that six out of ten Latino voters backed President Joe Biden. Kumar noted that Florida is an example of Democrats having “a deficit in communications and connection,” since the Sunshine State is where Trump saw his most significant gains.

“Trump and the Republican Party never left Florida. They kept cultivating and communicating with the Latino community,” Kumar said. “Sure, a lot of it was disinformation and messaging that Biden is a communist and a socialist, but they kept doing it — and it was effective.”

Another Democratic strategist and a former senior adviser to Sen. Bernie Sanders’s (I-VT) presidential campaign, Chuck Rocha said that part of the party’s problems are due to Latinos not being in prominent positions.

“When there are no people of color at the decision-making level of a campaign, our constituency becomes an afterthought and you underperform because you’re not reaching out to them with the same priority as white suburban ‘persuadable’ voters,” Rocha said.

He also noted that there were only campaign ads in Spanish during the last 30 days of the campaign cycle, which gave the impression that Latinos were not a priority to candidates after the voters had already formed opinions on candidates.

As a result of this, Kristian Ramos, campaign manager for Way to Win’s midterm message research project and a Latino outreach specialist told Politico that the concern is not that “suddenly Latinos are going to become Republicans,” but, instead, that support for Democrats is “soft.”