Centennial Elementary School in Denver, Colorado, announced its “Black Lives Matter at School Week of Action” for kindergarten and first grade that will teach the importance of disrupting the nuclear family in favor of “black villages.”

“Black Villages is the disruption of the Western nuclear family dynamics and a return to the ‘collective village’ that takes care of one another,” the “Black Lives Matter Guiding Principles” for the event reads.

Also included in the kindergarten and first grade indoctrination scheme is the “commitment” to being “transgender affirming” and “queer affirming” to create a “network where heteronormative thinking no longer exists,” among many other things. 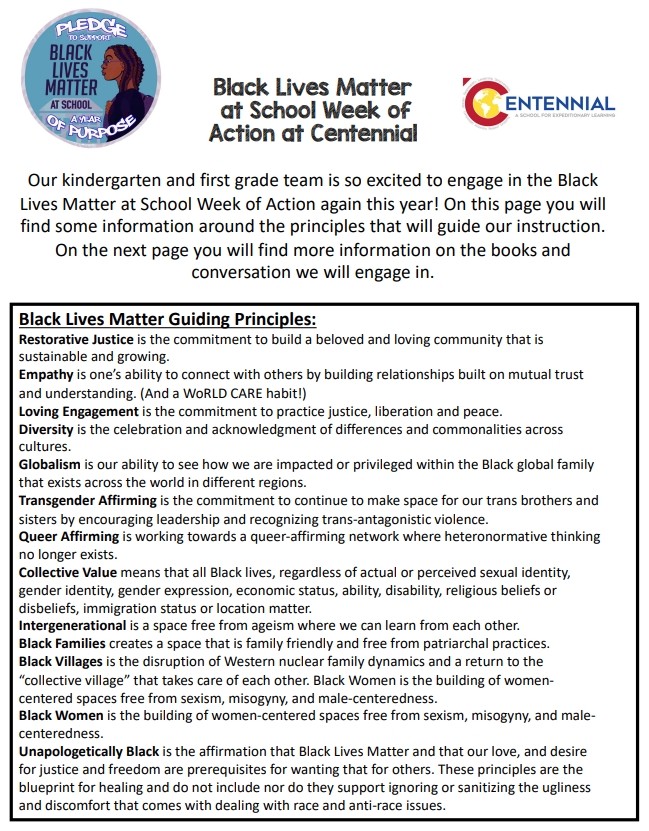 Centennial made headlines recently as it hosted a racially-segregated “playground night.”

But, as the “week of action” is aimed at five-, six-, and seven-year-olds, Centennial believes, “It is never too early to start to talk to kids about race,” according to their frequently asked questions page about Black Lives Matter. Centennial assures parents who are worried about teaching politics in the classroom that Black Lives Matter is “not political,” because the U.S. Government decided that openly supporting the group was not a Hatch Act violation for federal workers.

PDE Outreach Director Erika Sanzi told the Washington Examiner that teaching Black Lives Matter principles is “indoctrination at any age” and “borders on abuse with students this young.”