Voters for the two parties are becoming more divided on whether to trust or distrust the science establishment, according to a new survey by the Associated Press-NORC Center for Public Affairs Research.

But the AP report comes as academics admit that the United States is being politically divided by the “demographic shift” caused by the immigration of global migrants into an otherwise stable society.

In 2006, Republicans had more trust in science than Democrats, according to the AP/NORC chart: 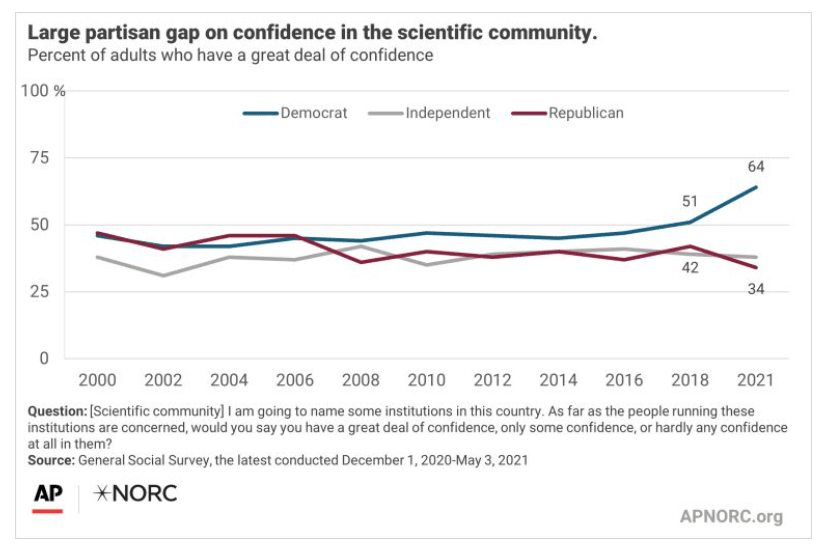 A January 18 report by Carnegie Endowment for International Peace said the United States is a “perniciously polarized” democracy. “There are no peer analogues for the United States’ current political divisions,” the report said as it admitted the polarization is spurred by rising identity politics amid accelerating immigration and diversity:

[There are] a number of features that make the United States both especially susceptible to polarization and especially impervious to efforts to reduce it. One such feature is the durability of identity politics in a racially and ethnically diverse democracy …  the United States is perhaps alone in experiencing a demographic shift that poses a threat to the white population that has historically been the dominant group in all arenas of power, allowing political leaders to exploit insecurities surrounding this loss of status.

The deepening political split was spotlighted by Thomas Edsall, a liberal columnist at the New York Times.

But Edsall, like many other establishment commentators, is unable to mention immigration and the imposed diversity as the cause, and he instead tried to blame the polarization on downstream factors caused by immigration. For example, Edsall suggested that the polarization can be overcome by papering over the expanding civic and economic diversity with taxpayer subsidies:

Two related studies — “Inequality, Identity and Partisanship: How Redistribution Can Stem the Tide of Mass Polarization” by Alexander J. Stewart, Joshua B. Plotkin and McCarty and “Polarization Under Rising Inequality and Economic Decline” by Stewart, McCarty and Joanna Bryson — argue that aggressive redistribution policies designed to lessen inequality must be initiated before polarization becomes further entrenched. The fear is that polarization now runs so deep in the United States that we can’t do the things that would help us be less polarized.

But Edsall admits that the money will not work if the underlying polarization has gone too far: “A deeply polarized electorate is highly unlikely to support redistribution that would benefit their adversaries as well as themselves.”

That inability to recognize the importance of migration leaves Edsall with a pessimistic conclusion: “The electorate as a whole is moving farther and farther apart into two mutually loathing camps … Looking over the contemporary political landscape, there appear to be no major or effective movements to counter polarization.”

This dour claim ignores the polarizing diversity that is deliberately caused by the government’s pro-elite economic policy of extraction migration — and the plentiful evidence that civic solidarity and overall prosperity will return once the migration is reduced.

Democrat Party claims to "diversity" are a total joke. https://t.co/lWZEi8yZch

The evidence can be found in many polls which show that Americans want immigration policy to help Americans — not corporations, investors, foreigners, and special interest groups.

The polls show deep and broad opposition to labor migration into the jobs sought by American workers. The opposition is growing, anti-establishment, multiracial, cross-sex, non-racist, class-based, bipartisan, rational, persistent, and recognizes the solidarity that Americans owe to each other.

Many progressives are hostile to ordinary Americans and wish to degrade their political status, civic authority, and economic clout. For example, Sherrilyn Ifill, the president of the NAACP Legal Defense and Educational Fund, suggested January 27 that ordinary Americans are so robot-like that they can be persuaded to participate in another genocide against Jews:

“Monsters exist, but they are too few in number to be truly dangerous. More dangerous are the common men, the functionaries ready to believe and to act without asking questions.” – Primo Levi#HolocaustRemembranceDay

Many progressives dismiss popular and mainstream support for curbs on migration as similar to unforgivable racism. Curbing immigration “is just a white nationalist argument that America should be for white people, and everybody else is somehow subpar and doesn’t belong,” said Heidi Beirich, who named her activist group, The Global Project Against Hate and Extremism. “They’re absolutely both bald-faced racist and eugenicist,” responded Hassan Ahmad, an immigration lawyer during their December conversation.

The “woke” progressives growing hostility was described by a report from the Pew Research Center in November 2021:

A large majority of Progressive Left (86%) say that people who have immigrated to the United States illegally generally make the communities they live in better. They also are more supportive than other political typology groups of increasing the number of legal immigrants coming to the U.S. Progressive Left also are particularly likely to say that greater social acceptance of people who are transgender is a good thing for the U.S. – 88% say this, including 75% who say this has been very good for the country.

Beginning around 2012, polls show an increasing number of white liberals began adopting more progressive positions on a range of cultural issues. These days, white Democrats (and, in particular, white liberals) are more likely than in decades past to support more liberal immigration policies, embrace racial diversity and uphold affirmative action.

Zach Goldberg, a researcher at the Center for the Study of Partisanship and Ideology, uses broad national surveys to show progressives’ growing hatred of conservatives and their ideas. The results are displayed on his Twitter account. For example:

1/n Data from an Aug. 2021 YouGov survey commissioned by the Cato Instit. shows that 60% of liberals would want social media companies to either permanently remove (32.5%) or suspend the posters (27.5%) of an empirically uncontroversial fact. pic.twitter.com/Db74rh6vuX

1/n After trailing them somewhat in 2016, white Dems (51.8%) are now significantly more likely (p=0.001) than non-white Dems (43.6%) to prioritize the use of 'inclusive'/PC language over speaking frankly about issues and problems facing the country. Little change among white Reps pic.twitter.com/fYQf1zINnk

In 2019, Goldberg described the progressives’ cultural war to seize power over Americans: “The woke elite act like white saviors who must lead the rest of the country, including the racial minorities whose interests they claim to represent, to a vision of justice the less enlightened groups would not choose for themselves.”