Pennsylvania U.S. Senate candidate David McCormick outlined an America First immigration vision after a trip to the U.S. border with Mexico, providing Breitbart News with an exclusive look at what he intends to focus on when it comes to the issue.

McCormick, a Republican vying for the nomination to replace retiring Sen. Pat Toomey (R-PA), told Breitbart News perhaps most importantly that when it comes to legal immigration, the focus needs to be on not negatively impacting Americans and legal immigrants who are already in the country.

“Members of Congress must prioritize our own citizens,” McCormick told Breitbart News. “I support President Trump’s pro-worker immigration reforms to include preventing corporate visa abuse, raising national security standards, establishing responsible asylum and refugee controls, implementing the Hire American program, and promoting a merit-based system. It is neither in the interest of today’s citizens, nor tomorrow’s immigrants, to admit numbers that erode living conditions, strain healthcare, and make it difficult for low-income workers to rise out of poverty. Washington needs to ensure an immigration system committed to the well-being of our people, from all places and backgrounds, who are already lawfully living here today.”

This is a significant development in that McCormick, the former CEO of the world’s largest hedge fund, Bridgewater Associates, is explicitly putting a marker down that he understands that “corporate visa abuse,” and more broadly the number of migrants allowed into the country legally, do have an effect on the “living conditions” and economic and general wellbeing of Americans and legal immigrants, particularly “low-income workers.” The viewpoint also represents a departure from the business and corporate-backed pushes for more immigration overall, and seems to further indicate an ongoing shift among Republicans away from special interests toward the interests of American workers—a trend that has rapidly intensified in recent years.

That populist push on the economics of immigration, something worth further exploring with McCormick and other candidates in 2022, comes in addition to the broader view on immigration policy that McCormick laid out for Breitbart News after his border trip.

“We need to return to the Trump policies that worked,” McCormick said. “Finishing the border wall is the backbone of any serious plan. ‘Catch-and-release’ has to go back to being ‘detain-and-remove.’ We must prosecute immigration-related crimes, including illegal entry, and block federal benefits from flowing to illegal aliens. It’s time to defund sanctuary cities. Here’s the bottom line: Illegal immigrants are coming in record numbers because they know Biden is letting them in. I will use every resource I have as a senator to ensure that if you come illegally, you will be apprehended, detained and sent home – you’re not staying. That’s how you eliminate the incentive to come illegally in the first place.”

McCormick said he visited the border to see firsthand the damage of the current administration’s policies. His team provided photos of McCormick at the border. 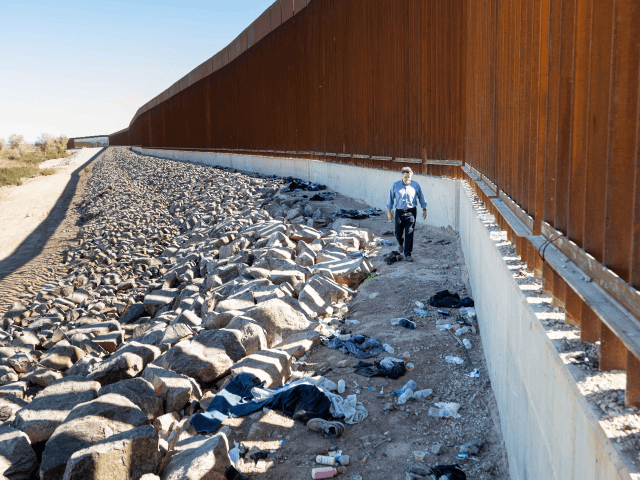 “I came here to the U.S.-Mexico border to see first-hand the challenges our brave border patrol agents are facing and to learn how I can better have their backs if the people of Pennsylvania send me to represent them in the U.S. Senate,” McCormick said. “The border and illegal immigration – and the increase in crime and drug trafficking resulting from Biden’s policies – are a big deal in our commonwealth and will be a major focus of mine if elected. I’m grateful to be here with border patrol union president Brandon Judd. His organization’s endorsement is significant because it sends a clear message that I’m the candidate in Pennsylvania who’s going to fight the hardest to reverse the disastrous policies of President Biden, who has created the worst border crisis in American history.”

“Strong borders can only be achieved with strong leadership and Dave McCormick embodies the kind of strength needed to uphold the rule of law, which is crucial to all United States citizens,” Judd said. He explained why the council endorses McCormick:

Safety and security begins at our borders and Dave understands the importance of this principle and is committed to the men and women of the National Border Patrol Council and will always ensure they have the support and resources needed to do their jobs effectively. Dave has fought to defend our country in uniform for the United States Army and he is the clear choice to continue that fight for our safety, for Pennsylvania and for our country. On behalf of the NBPC I am proud to endorse his candidacy for the United States Senate in Pennsylvania.

This development also comes as McCormick’s chief primary opponent, television doctor Mehmet Oz, was exposed this weekend for having ownership in a family company that faced the highest fine in Immigration and Customs Enforcement (ICE) history a few years ago for a scheme hiring and rehiring illegal aliens. That fine, nearly $100 million, was first reported by the New York Post.

A company owned by Dr. Oz's family received a $95 million fine from ICE in 2017 over a scheme to hire illegal aliens https://t.co/wphRHrZg7x

This focus from McCormick leaves little doubt that immigration is still a front-and-center GOP primary issue in America—and may be the most important issue to primary voters—and plays an important role in general elections as well.

“Pennsylvania may be two thousand miles from Mexico, but a massive number of illegal immigrants are flooding into our communities,” McCormick told Breitbart News. “And President Biden is doing far worse than simply allowing it; he’s actually facilitating it. Right before Christmas, a plane with over 100 illegal immigrants on board landed in Scranton in the middle of the night. They have flown at least 11 planeloads into Philadelphia alone. But it’s not just the planes; they’re coming by any means necessary. They’re often released into our commonwealth with orders to show up to court, but most will never show. Extremely conservative estimates say that Pennsylvania is already home to over 150,000 illegal immigrants. Over 50,000 of them live in Philadelphia, welcomed by the radical left city government that has made it a sanctuary city. We’ve got to enforce the law.”

“Last year, Customs and Border Protection seized twice as much fentanyl at the southern border than they did in 2020,” McCormick said. “During that same time period, 5,400 Pennsylvanians suffered a fatal drug overdose, and fentanyl was present in over 75 percent of those deaths. In some counties, like Lackawanna, overdose deaths more than doubled. This is a tragedy, and it’s devastating our communities. So when Democrats talk about conservatives lacking compassion at the border, I say two things: One, they have created a humanitarian mess at the border by attracting throngs of people, many of them women and children who are being exploited, so for them to even mention compassion after creating this giant mess is incredibly hypocritical. Secondly, I want to say, ‘Why don’t you have compassion for the citizens of Pennsylvania? What about our children who are dying because Mexican drug cartels smuggle their product across the border and distribute it into our neighborhoods?’ This is a major problem with China, too. The people of Pennsylvania have had it, and so have I.”