During the “Defund the Police” movement in 2020, school resource officers were pulled from schools and budgets were cut. As crime continues to surge two years later, schools are bringing officers back to boost safety, Fox News reported Monday.

“I think what you’re seeing and the reaction from these school districts is exactly what we’re seeing in almost every major city in this country: Everybody’s having buyer’s remorse for defunding the police,” Fraternal Order of Police National Vice President Joe Gamaldi told the outlet.

“We had 16 American cities last year have their highest murder rates in recorded history, and now people are quickly backtracking and realizing that police officers provide safety in our communities,” he continued.

The report pointed to Montgomery County, Maryland, which started this school year without school resource officers (SROs) for the first time since 2002. Schools replaced SROs with “community engagement officers.”

In the first four months of class, a staggering 1,688 911 calls were made. All in all, there have been 102 sex assaults, 87 assaults, 82 school threats, 76 controlled substance incidents, 57 weapon-related incidents, 57 conflicts, 35 mental health incidents, 28 property crimes and four robberies between August and February in the schools, 7News reported.

Following a shooting at Magruder High School on Jan.21, “which intensified calls from the community to get police back on campus.” The district is working on bringing back more officers, though they will not have as many as before.

Alexandra, Virginia has been grappling with a similar dynamic, according to the outlet. The school district was “rocked by a spate of violent fights” at the beginning of the school year. Some in the community reportedly blamed the Alexandria City Council for voting to eliminate SROs in 2021. 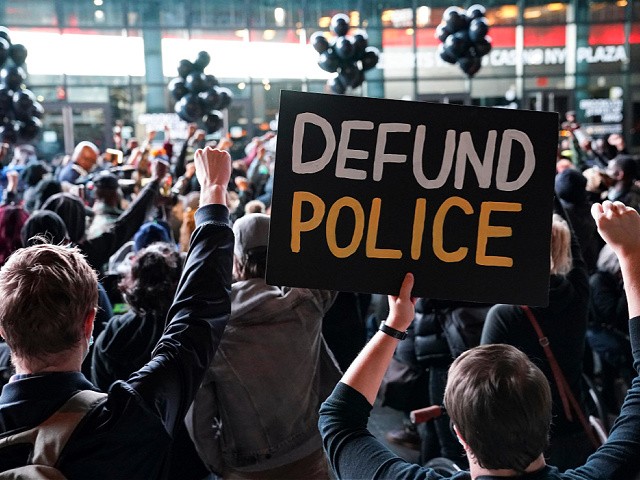 In this Oct. 14, 2020, file photo a protester holds a sign that reads “Defund Police” during a rally for the late George Floyd outside Barclays Center in New York. Some police organizations and Republican politicians are blaming Democrats and last year’s defund the police effort for a troubling rise in homicides in many cities across the country. (AP Photo/John Minchillo, File)

Soon after, the city council voted to temporarily bring SROs back through the end of the 2022 school year.

In California, the Pomona Unified School Board defunded its school police, only to have them return four months later after a 12-year-old was injured in a shooting near Pomona High School.

“To law enforcement officials who work as school resources officers, such as Rudy Perez, the vice president of the National Association of School Resource Officers, the job is ‘really not about being a cop.’ It’s instead ‘truly about being part of that ecosystem that you can address the safety issues, concerns that parents have, that teachers have,'” the report states.

“I can honestly tell you as a campus law enforcement officer, it was more 90% … managing tension and figuring out problem-solving. Ten percent of it was really enforcement,” Perez told Fox News.

Democrats and activists who supported the “Defund the Police” movement argued at the time that SROs were more likely to discipline or arrest black and Hispanic students.

“With the uprisings and the recent events that happened over the past year, students just don’t want to be greeted with police officers when they come back,” Amir Whitaker with the American Civil Liberties Union (ACLU) of Southern California, told the LA Times last summer. “Educators acknowledge that the fight to remove school police is part of the fight for racial justice.”

President of the Fraternal Order of Police National Patrick Yoes told Fox News that the main job of SROs is to boost safety in schools, “[tear] down walls, [build] relationships with kids,” and provide “law-related education.”

“I worked 36 years in law enforcement, and of that 36 years, I served as a resource officer at a high school in Louisiana. And I will tell you that bar none, it was the best job I’ve ever had because I went to work each day feeling like I was actually doing something and I could feel that I was having an impact,” Yoes said.