Canada police plan to physically clear out the Ottawa Freedom Convoy on Friday after protests ground the capital to a halt for three weeks.

Local authorities announced they are preparing to take a more hard line approach after setting up 100 checkpoints in Ottawa to limit who can enter the city centre in an effort to disrupt reinforcements reaching the protest this weekend.

Large numbers of police have also been spotted congregating in the Canadian capital – with reinforcements being called in from Quebec – a subtle indication they are planning to take a more hands-on approach with the protestors.

Police on Wednesday warned the Freedom Convoy if they do not leave the area immediately they will be arrested and their trucks will be seized, NDTV reports.

Chris Barber, one of the top organizers of the Canadian Freedom Convoy protests that have rocked Ottawa in recent weeks, has been arrested and will likely face criminal charges. https://t.co/RLM2F4xsaP

Interim Ottowa Police Chief Steve Bell outlined “a methodical and well-resourced plan” is going to be rolled out that will “take back the entirety of the downtown core and every occupied space”.

“Some of the techniques we are lawfully able and prepared to use are not what we are used to seeing in Ottawa, but we are prepared to use them… to restore order”, Bell continued.

Truckers have indicated they are unwilling to move as they blared their horns throughout the night and into the early hours of Thursday, alongside chanting “freedom”. 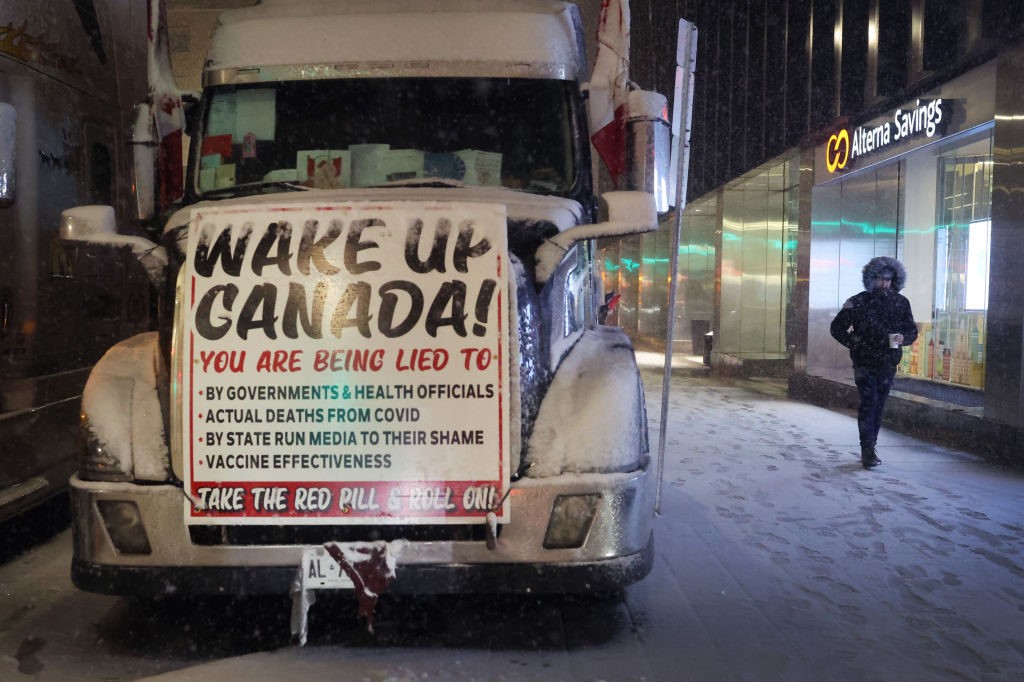 Trucks participate in a blockade near the parliament building as a demonstration organized by truck drivers opposing vaccine mandates continues on February 17, 2022 in Ottawa, Ontario. (Scott Olson/Getty Images)

Protest leaders have also suggested they are happy to risk arrest – with dozens of protestors arrested already this week – and have called for Canadians to reinforce them this weekend.

Prime Minister Justin Trudeau has refused to acknowledge the freedom rally against his government’s coronavirus restrictions as a protest and instead has opted to brand it as “illegal blockades and occupations”, as well as a  “threat” to Canadian “democracy”, using this narrative to implement emergency powers.

Trudeau, the leader of the Liberal Party in Canada, has also called the Freedom Convoy a “threat to public safety” in the Canadian Parliament and demanded that “these illegal and dangerous activities stop”, as they are a “threat to our economy and our relationship with trading partners”.

The city of Ottawa threatened in a statement Thursday to place the pets of Freedom Convoy protestors into “protective care” or possibly take them away permanently if their owners are arrested. https://t.co/5riQsWieIm

This contrasts with how he engaged the Canadian Black Lives Matter protests in 2020, choosing to take the knee, rather than take action or speak against statue topplers.

The Canadian Parliament will vote on Monday and is expected to approve new policies powers that the police will use to break up the convoys, with the Conservatives and Bloc Québécois opposing.