Rep. Mike Waltz (R-FL) said stinger missiles from the United States did not start arriving in Ukraine until a week ago, when Russia invaded Ukraine, despite Ukraine asking for them months ago.

Waltz said the Ukrainians he met with in December while in the country were “incredibly frustrated” that they were not receiving the air defense systems, as Russian troops were building up at the border.

“The Ukrainians that I met with were incredibly frustrated in December that they didn’t, they weren’t getting what they asked for,” he said. “How much more effective would they be right now if they had more Javelins, more body armor, more stingers?”

A CNN report from November 23 said some in the Biden administration were concerned that sending stingers would be seen by Russia as a major escalation.

CNN then reported on January 10 that the Biden administration had quietly authorized an additional $200 million in security assistance to Ukraine that consisted of small arms and ammunition, secure radios, medical equipment spare parts, and other equipment but no stingers.

A source told CNN that it was “not a game-changer and would not be enough to serve as a major impediment to a Russian invasion,” and said the Ukrainians have made clear to the U.S. that they want more security assistance, beyond what the U.S. had already provided.

Politico Nightly reported on January 11 that the U.S. military services “are wary of seeing their equipment shipped off to Eastern Europe.” “After all, replacing transferred Stinger missiles and other material takes time, thus leaving them with a temporary weapons gap,” the outlet reported.

Waltz said he has lingering questions over the Biden administration’s most recent announcement of sending $350 million in military equipment to Ukraine.

“Where did $350 million dollars [figure] come from? Why not $250 million? Why not $500 million? Why that number, was that a needs-based assessment? If you look at the breakdown, it’s really not enough. It’s about enough to equip a battalion,” he said.

He said he has been personally reassured by Defense Secretary Lloyd Austin that the latest tranche of aid is “arriving in Ukrainian’s hands right now.”

Waltz, who received a briefing from a senior U.S. defense official along with other lawmakers on Wednesday, said the war in Ukraine is already turning into an insurgency.

“The main thing you need is a demonstrated will to fight and [Ukrainian President Volodymyr] Zelensky has galvanized his population, and the Russians have made a strategic mistake in not being able to shut down the commercial internet. Every day that [Zelensky] is on television, the Europeans have been shamed into doing more,” he said.

“I think he has done far more than what Biden has taken credit in terms of unifying NATO, galvanizing the world and unifying his own people,” he said.

He said the Ukrainian military was already preparing for an insurgency as far back as December, shifting from door-kicking missions to guerrilla warfare.

He also said the Russians are appearing to adjust their tactics, too, going from precision strikes meant to keep their infrastructure intact to siege warfare and leveling cities to break the will of the Ukrainian people. 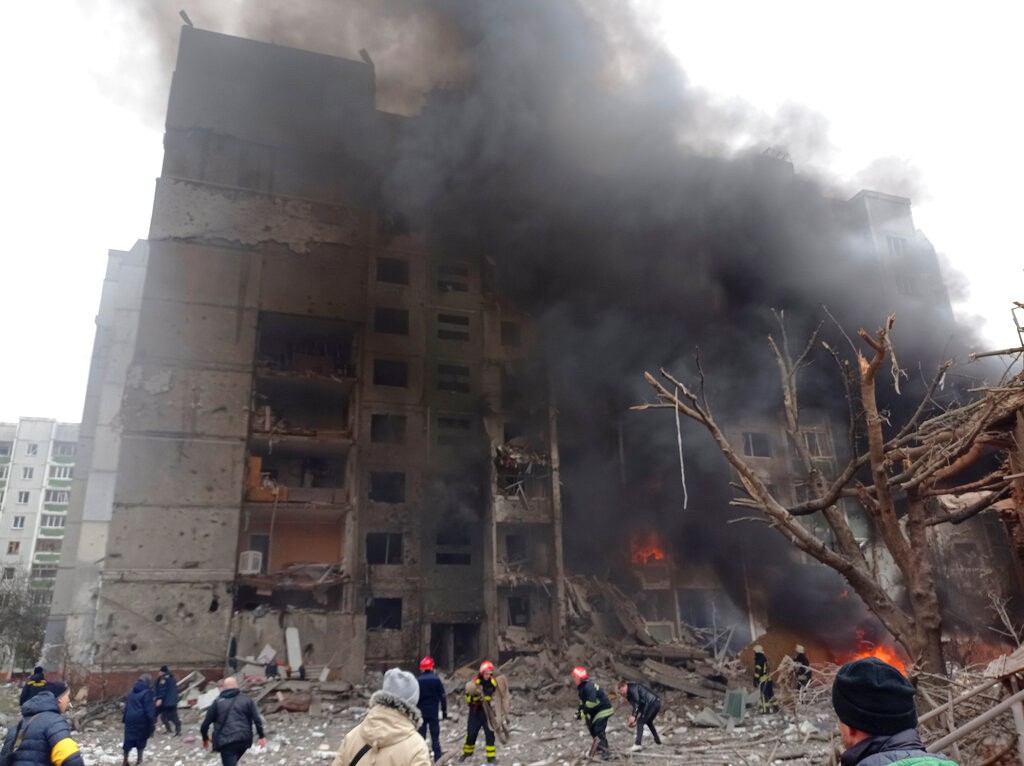 Firefighters work to extinguish a fire at a damaged city center after Russian air raid in Chernigiv, Ukraine, Thursday, March 3, 2022. Russian forces have escalated their attacks on crowded cities in what Ukraine’s leader called a blatant campaign of terror. (AP Photo/Dmytro Kumaka)

“So I think this is going to grind into a protracted war. And therefore…logistics is what matters the most,” he said.

He said normally a Soviet brigade will deploy with about three to four weeks of supplies, so if the war goes beyond that, Russian President Vladimir Putin will have to shift Russia’s industrial base to support the war effort.

“If the insurgency can cut off the logistics and supply lines, which will be very vulnerable in spring because it’ll be totally confined to the roads, then that’s how they’ll have a fighting chance,” he said. “Logistics is what wins wars.”

He said he is hearing that part of the reason the Russian military has not been able to establish air dominance is due to not replenishing their stocks from their involvement in Syria.

“That’s part of the reason they haven’t been able to establish air dominance — literally not enough bombs, missiles, spare parts for their planes, which I think is a really important dynamic. We just assumed that they’ve got unlimited amount of stuff, but high-end precision stuff, they don’t have nearly as much as you think,” he said.

He also said Zelensky might want to think about relocating to Lviv in the West.

“On one hand, I admire Zelensky in standing strong and all his great quotes, but on the other hand, over the long term, he has to live, he has to survive, he has to keep his government intact. And I can certainly see a scenario where he displaces to Lviv, stays inside Ukraine,” he said.

“For the United States, that is much cleaner and easier for us to support the ongoing government than if that government is overthrown, and now we’re supporting a guerrilla movement against the Ukrainian government. That has some more complex legal questions between overt military Title 10 and covert Title 50 — I’ll just leave it at that,” he said.