The text message is being described as a “smoking gun” by some observers because it appears to be written corroboration of charges against Sussmann. Furthermore, evidence in Durham’s filing also implicates the Clinton campaign in a “conspiracy.”

Sussmann is on trial for lying to the FBI, allegedly because he presented himself as a concerned citizen rather than a lawyer working for the Clinton campaign. His claims about a Trump connection to Russia via Alfa Bank were debunked as a hoax.

The filing (via Just the News) asks the court to include certain evidence against Sussmann, and to exclude other evidence that the defense insists must be part of the case. The text message complements claims that Sussmann lied to the FBI verbally.

As the filing notes (original emphasis):

The defendant provided the FBI General Counsel with purported data and “white papers” that allegedly demonstrated a covert communications channel between the Trump Organization and a Russia-based bank (“Russian Bank-1”). The Indictment alleges that the defendant lied in that meeting, falsely stating to the General Counsel that he was not providing the allegations to the FBI on behalf of any client.

Jim – it’s Michael Sussmann. I have something time-sensitive (and sensitive) I need to discuss. Do you have availibilty for a short meeting tomorrow? I’m coming on my own – not on behalf of a client or company – want to help the Bureau. Thanks. (emphasis added).

The FBI General Counsel responded: “Ok. I will find a time. What might work for you?” To which the defendant replied: “Any time but lunchtime – you name it.”

In his meeting with Agency-2 employees, the defendant also made a substantially similar false statement as he had made to the FBI General Counsel. In particular, the defendant asserted that he was not representing a particular client in conveying the above allegations. In truth and in fact, the defendant was continuing to represent at least Tech Executive-1– a fact the defendant subsequently acknowledged under oath in December 2017 testimony before Congress (without identifying the client by name).

Durham’s filing also seeks to admit emails that include the Clinton campaign in the effort to substantiate the Alfa Bank hoax. These emails could be considered inadmissible hearsay, but Durham explains that they are not being used to establish the truth of the emails, but rather that there was a “conspiracy” between Sussmann, the Clinton campaign, and others: “[T]he relevant communications are … admissible as co-conspirator statements made in furtherance of a joint venture,” he says.

Thus far, neither Hillary Clinton nor her presidential campaign have been indicted for their alleged roles in the “conspiracy.”

Durham also wants to admit into evidence a tweet from Hillary Clinton quoting Jake Sullivan in support of the hoax: 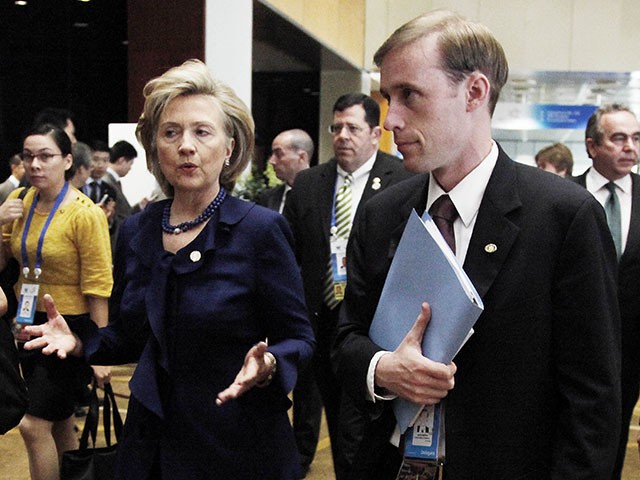 FILE – This Nov. 11, 2009 file photo shows then-Secretary of State Hillary Rodham Clinton walking with a then-Deputy Chief of Staff Jake Sullivan in Singapore. Last summer, Sullivan was traveling with his boss, Hillary Rodham Clinton, when he suddenly disappeared during a stop in Paris. He showed up again a few days later, rejoining Clinton’s traveling contingent in Mongolia. In between, Sullivan secretly had jetted to the Middle Eastern nation of Oman to meet with officials from Iran, people familiar with the trip said. The July 2012 meeting is one of the Obama administration’s earliest known face-to-face contacts with Iran and reveals that Sullivan _ who moved from the State Department to the White House earlier this year _ was personally involved in the administration’s outreach to the Islamic republic far earlier than had been reported. (AP Photo/Ng Han Guan, File)

In his role as National Security Advisor, Sullivan repeatedly provides the media with information about Russia, despite his implication in the Alfa Bank hoax and his connection to the ongoing Sussmann trial.