Laxalt, who is the state’s former attorney general, accused his potential Democrat competitor of leaving Nevadans floundering as crime and inflation skyrocket, and as Biden’s non-existent immigration policy allows fentanyl and human trafficking to abound. Speaking to Breitbart News Saturday, Laxalt said Biden was able to take the country “dramatically in the wrong direction” in “a few short weeks” with little pushback from his own party. 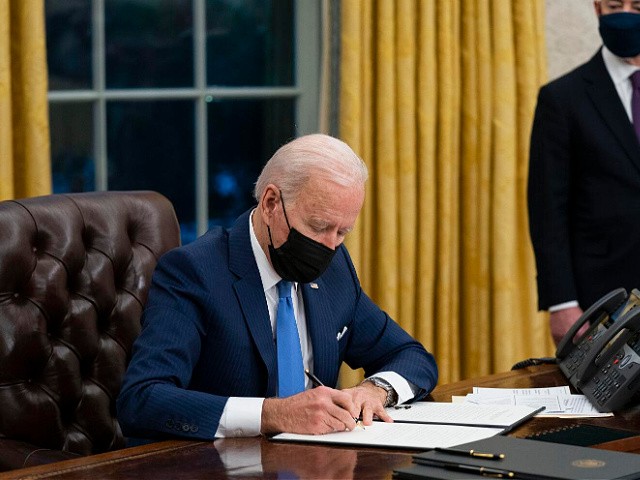 In this Tuesday, Feb. 2, 2021, file photo, Secretary of Homeland Security Alejandro Mayorkas looks on as President Joe Biden signs an executive order on immigration, in the Oval Office of the White House in Washington. (Evan Vucci, File/AP)

“We were a safe state. We were a booming state, and here we are just a few short years later. I think the voters are going have a huge contrast, and all the money in the world is not going to save Cortez Masto from her failed record and the failed record of President Biden,” he said.

Laxalt has a significant lead within his own party just a few weeks out from the June 14 primary. Should he secure the nomination against his closest GOP competitor Sam Brown, Laxalt would take on Cortez Masto in November. Nevada Democrats are particularly vulnerable this election, with both Cortez Masto and Gov. Steve Sisolak (D) up for reelection. Democrats nationally have been trying to distance themselves from President Biden, as his tanking agenda makes him and those around him increasingly unpopular. Cortez Masto herself has been hesitant to call herself a “Biden Democrat,” though she said the president is “always welcome in my state.” 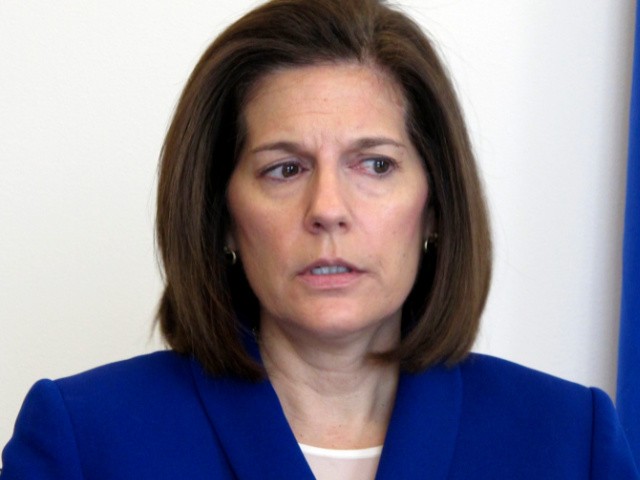 Early polling already shows Laxalt leading Cortez Masto in a hypothetical matchup. A poll released in early May showed Laxalt at 47 percent to Cortez Masto’s 46 percent, a 1 percent lead within the survey’s 4 percent margin of error.

“You need someone that’s going be strong and is actually going to be willing to stand up,” Laxalt said. “Cortez Masto has been a rubber stamp for these open border policies that have allowed massive illegal immigration, have allowed huge spikes in human trafficking, fentanyl, and other drug trafficking in our state. So when it comes to those issues, the contrast is massive. And law enforcement actually switched from endorsing her in 2016.”

Indeed, law enforcement groups have endorsed Laxalt over the incumbent, an action Laxalt says is largely due to his record as attorney general and Democrats’ handling of the Black Lives Matter riots and illegal immigration. Democrats’ prioritization of radical leftist policies is projected to be particularly unpopular with Hispanic voters, a demographic key to securing a victory in the state. April analysis from Politico cited Ruy Teixeira, co-author of “The Emerging Democratic Majority” saying, “Nevada went from three-tenths of percentage more Democratic than the nation as a whole in 2016 to 2 points more Republican in 2020.” Nevada Democrats’ margin among Hispanics dropped by 8 points between those two elections, and the decline “was driven almost entirely by working-class Hispanics.”

“People felt unsafe, and it would’ve been a good opportunity to have our senior senator step up as a former top law enforcement officer, former attorney general, and say, ‘We’re not going to tolerate violence, and we’re certainly not going to tolerate police officers being shot in the streets.’ And she didn’t do that,” Laxalt said. “I think the Hispanic community … are just like, ‘What in the world is going on?’ And [they] got a chance to see if the Democrat Party doesn’t represent them. The Democrat Party breaks everybody up into special interest groups, and it was very, very obvious that they were not a priority at that time.”

Laxalt told Breitbart News Saturday host and Washington, D.C., Bureau Chief Matthew Boyle, that if Nevadans vote for him, they will be getting a “former top cop.” He specifically spoke about his record as attorney general of establishing programs to combat drug abuse, promote school choice, and face crime head- on — experiences he said he intends to take with him to the U.S. Senate. He also intends to vote in ways that would tackle inflation and make daily costs affordable for everyday Americans, one of the GOP’s strongest campaign points, with food inflation at a 41-year high.

“We need someone at the national stage that understands these issues and are going to make them a priority. That’s something that voters can count on for me, that’s our biggest contrast,” he said.