Many on the far left have altered course and embraced President Joe Biden as the future of their party after the midterm elections produced greater-than-expected success for Democrats.

Just last year, a host of far-left Democrats were averse to Biden’s leadership due to faltering polling number amid policy failures, such as the deadly Afghan withdrawal and overbearing coronavirus mandates.

“There is a strong possibility, obviously, that the current vice president may seek the presidency again,” Nina Turner, former co-chair for Sanders in 2020, stated in 2021. “And there’s an even stronger possibility that others will be seeking the presidency, including people on the progressive left.”

“Unfortunately, President Biden has been neither bold nor inspiring,” RootsAction issued a statement in July. “And his prospects for winning re-election appear to be bleak. With so much at stake, making him the Democratic Party’s standard bearer in 2024 would be a tragic mistake.”

But plans to support an alternative to Biden appear to have cooled after the midterm elections produced greater success than was predicted for Democrats. The Supreme Court’s ruling on abortion and the Republicans’ lack of a concrete cure for the pandemic-induced inflation seemed to work against the GOP’s plan to retake the House and the Senate.

Far left Democrats now appear to be crediting Biden for the midterm success and uniting behind him for reelection in 2024.

“Even if Biden was running for reelection, I think we could have seen a few people run against him. But now, I think he’s got a clear field.” Cooper Teboe, a far-left Democrat strategist and adviser told the Hill. “I think what the midterms did accomplish is they silenced that [opposition].”

Sen. Ed Markey (D-MA), one of the most radical Democrat senators, expressed support for Biden if he makes good on his intention. “If Joe Biden wants to run, I think we should all rally behind him,” he told a Boston-based ABC affiliate.

One of the most far-left House members, Rep. Pramila Jayapal (D-WA), said last week she was converted after the midterms from opposing Biden to supporting him. 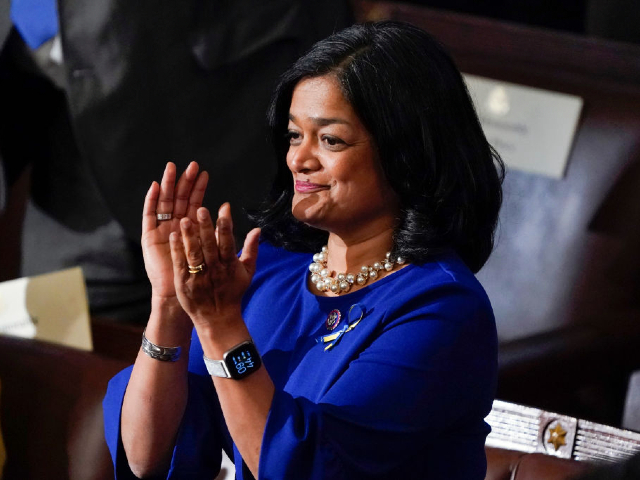 WASHINGTON, DC – MARCH 01: Rep. Pramila Jayapal, D-Wash., applauds as President Joe Biden delivers his first State of the Union address to a joint session of Congress, at the Capitol on March 01, 2022 in Washington, DC. During his first State of the Union address, Biden spoke on his administration’s efforts to lead a global response to the Russian invasion of Ukraine, work to curb inflation, and bring the country out of the COVID-19 pandemic. (Photo by J. Scott Applewhite-Pool/Getty Images)

“He was not my first or second choice for president, but I am a convert,” Jayapal said of Biden to Politico. “I never thought I would say this, but I believe he should run for another term and finish this agenda we laid out.”

Far-left groups have also changed their tune to finding an alternative to Biden. “Regardless of whether Biden is the nominee in 2024 or not, he has a responsibility as the leader of this country, who recognizes that democracy is tanking and crippling right now, to be able to buy in social trust from young people who will be the protagonists of saving it,” John Paul Mejia, the national spokesman for the Sunrise Movement, told the Hill.

Though some Democrats may feel a sense of relief after the midterms, others still have doubts about the president’s future. Some have publicly expressed that Biden is simply too old to potentially launch a 2024 reelection. Biden is the oldest president in U.S. history, achieving that mark when he was inaugurated at age 78 in 2021. Biden turned 80 years old on November 20th.

“If he were 60 and not 80, there would be absolutely no doubt,” David Axelrod, former President Barack Obama’s chief strategist, told the New York Times last week.

Shelia Huggins, a member of the Democrat National Committee from North Carolina, echoed Axelrod’s sentiments. “I just still have some concerns about him running again. Part of it does have to do with his age,” she said.

Biden’s age is not the only concern for Democrats. The turnout among Black voters, a key demographic for the Democrat Party since the 1970s, was lackluster. According to the Times’ analysis, average black voter turnout was more than 25 percent lower than among white voters in Georgia, Louisiana, and North Carolina, falling to its lowest levels since 2006.

Not all the data in each state has been finalized to draw conclusions, but Georgia, Louisiana, and North Carolina’s population of black voters is a strong indicator Democrats may be losing a key portion of their intersection coalition.

The Hispanic demographic is also a worry for Democrats. Bloomberg published an op-ed after the election that warned Republicans are gaining ground with Hispanic voters, citing Florida’s Miami-Dade County.

To the Democrats’ chagrin, Gov. Ron DeSantis flipped the county from blue to red. The county had not turned red for a gubernatorial candidate since Jeb Bush did it during his 2002 reelection. With Hispanic support, DeSantis was reelected over Rep. Charlie Crist (D-FL) by nearly 20 points.