Rome was not built in a day, and did not crumble in a day. Nor did it crumble for only one reason. Yet, in the midst of a massive ratings drop, the NFL rushes to say what’s not causing the decline, rather than what is causing it.

First, the decline. How bad is it?:

With a 9.0/15 rating in metered-market results, the Houston Texans’ 26-23 overtime over the Indianapolis Colts on Sunday was not only a season low for SNF but the worst the NFL powerhouse series has done in nearly five years. Only the October 23, 2011 game — in which the New Orleans Saints smashed the Colts 62-7 — has come in with a lower MM rating (8.2). Unlike last week, last night’s game did not face a Presidential debate on all the other networks.

Compared to the previous SNF season low with last week’s Giants-Packers game, last night’s Texans-Colts matchup was down 12% in MM ratings. The October 9 SNF went on to grab a 5.9/16 rating among adults 18-49 with 16.62 million watching — an expected double-digit drop from the week before, all things POTUS considered, especially with two teams playing who lack big national followings and, for the most part, had a lackluster game until the 4th quarter.

Even though NBC and the NFL will win Sunday, last night’s ratings tackle comes after weeks of declines for SNF and one week before TWD returns to likely challenge the franchise’s 18-49 demo supremacy much like it successfully has on several Sundays over the years. Some sunshine could come to the NFL and NBC on October 30 when SNF has the Cowboys up against the Philadelphia Eagles – which is certain to attract and retain eyeballs if it doesn’t become a blowout.”

Yikes. That’s no momentary slip up.

Yet, the league claims Colin Kaepernick’s protests have nothing to do with the ratings drop. According to an internal memo obtained by the Wall Street Journal: “As for a potential backlash by some viewers angered at players not standing for the national anthem to protest of police brutality, the NFL said it sees no evidence to that being a factor in declining ratings: ‘In fact, our own data shows that the perception of the NFL and its players is actually up in 2016.'”

Which, of course, the NFL has to say. If they blame the protests for ratings decline, they would have to stop Kaepernick and his minions. Resulting in the media labeling the league as racists.

However, one narrative the NFL can’t control and distort to their own liking is polling. According to Quinnipiac, 54% of Americans disapprove of Kaepernick’s protests. Among whites, that number climbs to 63%.

Again, like mighty Rome, the NFL’s crumbling doesn’t come merely from Kaepernick protests. Quality of play in the league is terrible, Thursday Night Football has over-saturated the market, and officiating is the worst I’ve seen in my lifetime.

Even allowing for all that, why can’t the visceral angst and disapproval of 54% of America be a reason too? Is it so hard to imagine that a majority-conservative, NFL-watching fanbase might have issue with an overpaid, overrated child of privilege putting his ill-conceived “look at me” campaign over and above the national anthem? 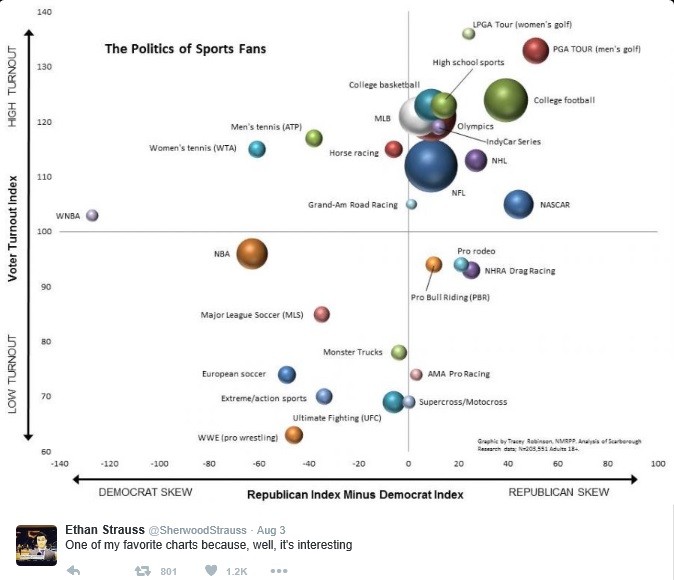 No, it’s not hard at all. Which is why the NFL dare not say it. Not because they don’t think the protests are a factor. They know they are.