The same day U.S.A. gymnast Simone Biles won a bronze medal at the 2020 Tokyo Olympics, saying it “means more than all of the golds,” New York Rep. Alexandria Ocasio-Cortez called Biles “brave” and “a role model” for her decision to drop out of the women’s team final to take care of her mental health.

“I’ve pushed through so much the last five years and the last week while I’ve even been here,” Biles told reporters after Tuesday’s event. “My mental and physical health is above all medals that I could ever win.” 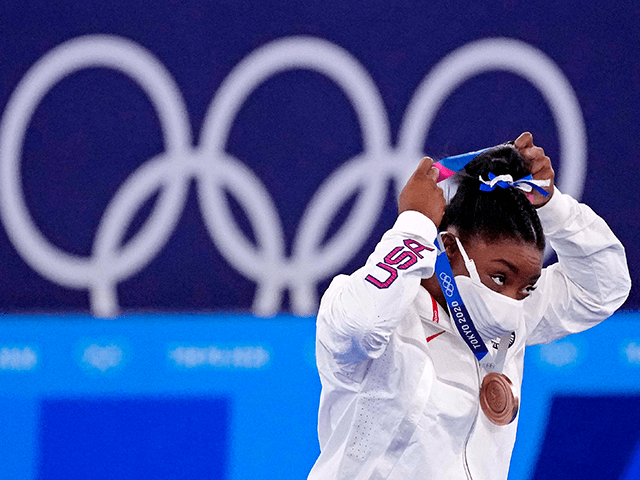 “Her bravery, I think, was a huge example to everybody,” Ocasio-Cortez told TMZ on Tuesday. “And her coming back to win another medal it showed that her taking care of herself helped us … it helps you be better in the end.”

“She showed that she is a role model, not just as an athlete, but a leader for just all people,” Ocasio-Cortez said. “Especially women, especially people who say “listen, we don’t have to choose between our performance and ourselves, and, like, our health. And that both of those things are one and the same.”

When the reporter said he expected to see Biles on Capitol Hill in hearings to speak about mental health, Ocasio-Cortez replied, “That would be amazing. I hope so. We need her voice.”

Former First Lady Michelle Obama also lent her support to Biles following her withdrawal from the Games, saying in a tweet, “We are proud of you and we are rooting for you.”

Am I good enough? Yes, I am. The mantra I practice daily. @Simone_Biles, we are proud of you and we are rooting for you. Congratulations on the the silver medal, Team @USA! 🎊