The National Basketball Association is again going all-in on the coronavirus vaccine, this time by demanding that all players, coaching staff, and office personnel get vaccine boosters or face increased restrictions and a constant barrage of virus testing.

The NBA informed players and coaches that they must receive a booster shot if they took the single-dose Johnson & Johnson coronavirus vaccine, ESPN reported.

After an agreement with the National Basketball Players Association, the league ruled that any employees and players who took the J&J shot more than two months ago must get a booster. The booster is also required of those who took the Pfizer and Moderna vaccines more than six months ago. 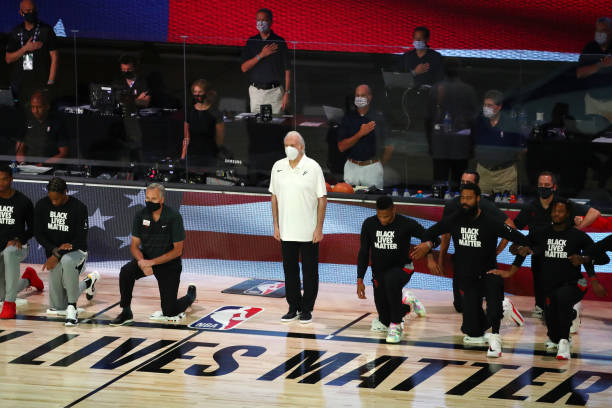 LAKE BUENA VISTA, FLORIDA – AUGUST 11: Head coach Gregg Popovich (C) of the San Antonio Spurs wears a mask while players kneel before a NBA basketball game against the Houston Rockets at The Field House at ESPN Wide World Of Sports Complex on August 11, 2020 in Lake Buena Vista, Florida. NOTE TO USER: User expressly acknowledges and agrees that, by downloading and or using this photograph, User is consenting to the terms and conditions of the Getty Images License Agreement. (Photo by Kim Klement-Pool/Getty Images)

“Data used to make the league’s determinations showed that antibody levels for Pfizer and Moderna recipients wane after six months and after two months for Johnson & Johnson recipients,” ESPN reported.

The league added that those who refuse to take the booster would be subject to testing on game day and over and over again during the rest of the week.

NBA informed teams today that all players who received the J&J vaccine at least two months ago will be subject to Game Day testing beginning Dec. 1 if they do not receive the additional booster shot. https://t.co/l0SCUUERAA

For now, the NBA is making this a “recommendation,” however that is what officials said at the beginning of the pandemic chaos and later made it a requirement.

The switch to requiring the vaccine forced Brooklyn Nets star Kyrie Irving to skip the 2021 season up to this point and perhaps until the end f the season due to his decision to forego the vaccine.

It is highly likely that the league will eventually require the booster shot.