As expected, some people find it more offensive that I chose to "censor" a word in the title of my video.

"I don't see how this word is offensive," a person who has never been the target of that word sagely proclaims.

The game, described by developer Pan Games as “the world’s first tranny game” acts as a simple sword-play action game featuring a transsexual protagonist. The game was blasted by Sterling in a series of tweets, as well as a video. This caused other influential video games social justice warriors, including Laura Kate Dale, to unleash their social media hordes.

I really hope Steam refuses to let this on Greenlight at step one.

Let's repeat – If you are not Trans, you do not get a say on if Tranny is a slur / if it should be reclaimed etc.

@pan_games I'm telling you now for your own good, pull that trailer, remove the word tranny and the suggestion ex CD Red staff work for you.

Due to the level of backlash received from Sterling’s public shaming mob, the developer quickly deleted the game’s trailer, synopsis, and public presence. The developers also apologised repeatedly to the online hordes, with further tweets suggesting that the waves of attacks had a serious affect on them. “Being told to die over and over has upset me so much,” said the developer.

In an email to Breitbart Tech, the developer, who did not wish to be named, told us: “It was supposed to be fun, and different, and meant to make people laugh. As well as raising awareness in diversity, for cross dressing and Trans. I had no idea that the word tranny, or being associated with the word would whip up such hate.”

Sterling, who refuses to say or even write the word “tranny,” opting to censor it out in print or refer to it as “the T slur,” recognised the abuse being sent to the developer, but despite stating that he did not condone the attacks, failed to ask his followers to stop. Sterling continued to tweet multiple times about the game.

Not dogpiling them. I don't think they should be attacked. They're being genuinely apologetic. I can respect that. https://t.co/1nd81U8hD5

After celebrating the developer’s removal of the game in its original form, Sterling and Dale then tried to bully the developer into hiring a “transgender consultant.”

Take @LaurakBuzz's advice and find an actual trans developer to work with if you want to represent them. https://t.co/Xxgv3SZ9QL

Not the point. Pan Games, in its own words, wants to promote diversity. It made a huge error by not consulting. https://t.co/ehNHgnOiu7

@pan_games get a trans person involved as a paid consultant before re launching this project.

Your humble narrator stepped in at this point, tweeting what everyone was thinking.

This led Dale to respond with the following:

@MrNashington I would NOT want to be a paid consultant on this myself.
I still think it's going to be a train wreck project long term.

@MrNashington I don;t want my name associated with what is likely to turn out a shitty game :P

Despite receiving support and well-wishes from numerous trans people on Twitter who attempted to stand up for the developer, the developers still claim to be suffering from considerable emotional distress.

“I  pulled it currently from Steam due to this Jim Sterling video and comments made. If i do re-submit, it wont have a word that could be seen as offensive.” said the developer. “To be honest with you, I had no idea Tranny was that offensive to the point people are really upset and mad about it, to which  I have apologized. I think i’m going to just scrap it due to the hate mob. And to be honest i feel very down about the whole thing.”

The developer has since updated their website with the following post, indicating that with a few alterations, Tranny Gladiator could be coming back: 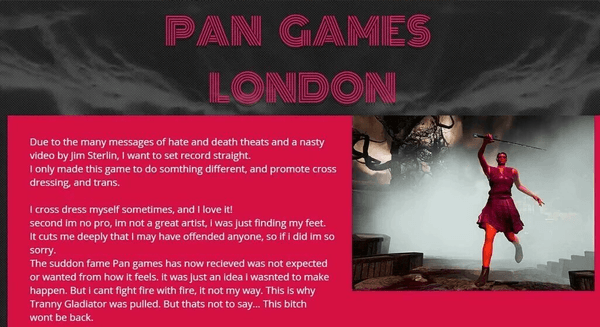