The David Horowitz Freedom Center has had their donation processing system blocked by Visa and Mastercard allegedly following a campaign by the Southern Poverty Law Center. Visa has since contacted Breitbart News to deny involvement in the blacklisting of the Freedom Center.

The David Horowitz Freedom Center stated in a recent email that its ability to accept donations by credit card has been disabled by both Visa and Mastercard following a campaign by the SPLC to label the Freedom Center as a hate group. This situation comes shortly after Robert Spencer of Jihad Watch was forced off the funding platform Patreon following pressure from Mastercard.

The Freedom Center is the next target of the SPLC, and they are using Mastercard and Visa again in their attempt to shut down conservative voices. In an email sent to supporters, Horowitz outlined how the SPLC had convinced Mastercard and Visa to block the Freedom Center from receiving payments and donations via credit card. In the email, Horowitz requested that supporters send donations via check to a P.O. Box.

In the email to supporters, the Freedom Center lashed out at the move by Mastercard and Visa, saying: “this blow could be the end of the Freedom Center. Decades of work, down the drain because the hateful Left wants to squash free speech and silence an organization that dares to question them. 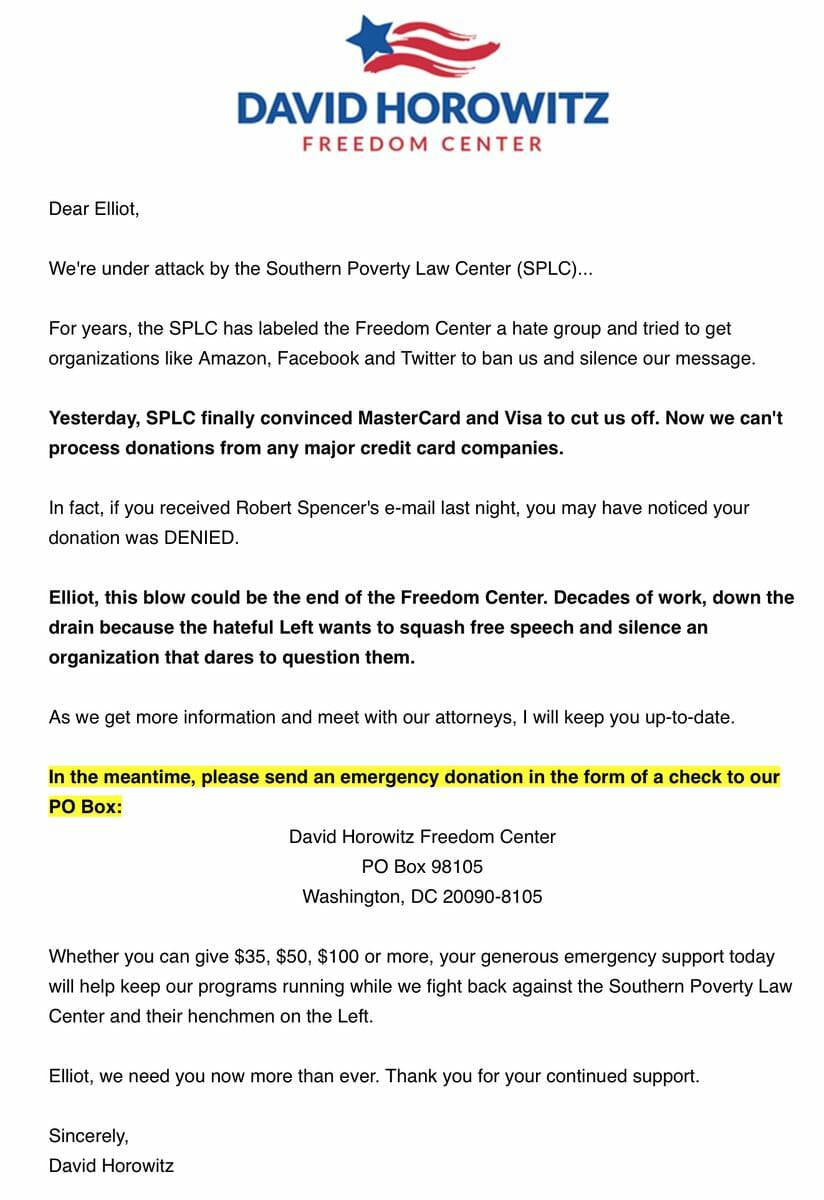 Breitbart News reached out to David Horowitz who provided the following comment:

We have been attacked by the left wing hate machine whose goal is to suppress and silence conservative voices. This is the work of a Soros funded Media Matters and Southern Poverty Law Center operation. It’s cynical, calculated and supported by the Democratic Party. The reason Mastercard and Visa gave us for cutting us off and thus sabotaging our online fund-raising operation is that the SPLC told them that we were a hate group. It is wrong to focus on the Tech heads as the culprits because as businessmen they have a vested interest in keeping their platforms politically neutral. They have been threatened by Senator Mark Warner and other Democrats if they don’t censor conservatives. The fact that Mastercard and Visa are now part of this juggernaut indicates how dangerous this has become.

After the publishing of this story, Visa replied to Breitbart News’ request for comment, denying any involvement in cutting off the Freedom Center from payment processing. In fact, Visa claims to have not been aware of the Freedom Center’s financial blacklisting before this article.

Breitbart News reached out to Mastercard for comment on the issue but has yet to receive a reply.

Update — Information has been added to this article based on Visa replying to Breitbart News’ request for comment by denying involvement in the financial blacklisting of the David Horowitz Freedom Center.