Three individuals have been arrested for aggravated arson after allegedly setting a dorm room door on fire during the late hours of Friday night at Tulane University in New Orleans, Louisiana. Although the motive behind the arson still remains unclear, one of the students living in the targeted dorm room is the president of Tulane’s Turning Point USA chapter, and had recently been “doxed” by leftists seeking to “expose” members of TPUSA and Young American for Liberty (YAL).

Tulane University campus police have arrested three individuals — Robert Money, David Shelton, and Naima Okami — on suspicion of aggravated arson for setting fire to a dorm room door on Friday night at Tulane University. One of the two students who lives in the dorm room is a conservative and chapter president for Turning Point USA, who had recently been “doxed” by leftists targeting members of another campus organization he belongs to, YAL.

The term “dox” refers to the disclosure of personal, private information — such as a phone number or home address — belonging to a specific individual, which is typically posted to the Internet or in a public area for others to use with malicious intent.

The doxed conservative student, Peyton Lofton, told Breitbart News that he was not present inside the dorm room at the time of the arson, but that his roommate Jackson Arnold was.

“The fire alarm went off, I was in my room, I opened my door, and the sign on the front of my door was on fire,” said Arnold to Breitbart News, “So I blew [the fire] out and then left the building with everyone else.”

Arnold said that the building had been evacuated at around 1:30 a.m. and that everyone was allowed to re-enter about an hour later.

“I imagine it was somebody who was drunk and stupid and wanted to play some sort of prank,” added Arnold before the arrests, “I don’t know, but hopefully we’ll figure it out soon.”

As it currently stands, the motive behind the arson has yet to be revealed, however, it is speculated that the attack may have been politically motivated, given that Lofton had been doxed just days earlier by leftists seeking to “expose” conservative students on campus.

Lofton is Tulane University’s TPUSA chapter president, as well as a member of the school’s YAL student group.

This is Peyton Lofton, our chapter leader for @TPUSA at Tulane

The violent left is targeting students!

“It is a sad day when conservative students are under direct and physical attack,” said Kirk to Breitbart News, “Unfortunately, this is a pattern of violence targeting students that disagree with leftist ideas.”

One week before the arson took place, Lofton said that signs began to appear on Tulane’s campus revealing the names of students involved with the school’s YAL group and accusing them of being “racist, misogynistic and intolerant” individuals who make “offensive jokes.”

Lofton added that he and others continued to find more signs appearing throughout campus over the course of the next three days.

One day after the signs were discovered, the harassment moved its way to the Internet, doxing Lofton through a now-suspended Twitter account — @YALexposed — that had been referenced on the signs, which tweeted a screenshot of Lofton’s Facebook profile, revealing that he is a student at Tulane in association with YAL.

“I’m proud of the work I’m doing on and off campus with YAL and TPUSA to bring students to the principles of the Constitution and individual liberty,” said Lofton in a statement on Saturday, “This only encourages me to continue the battle to reach my classmates with the message of freedom.”

Lofton provided Breitbart News with a picture of one of the signs posted on campus naming members of YAL: 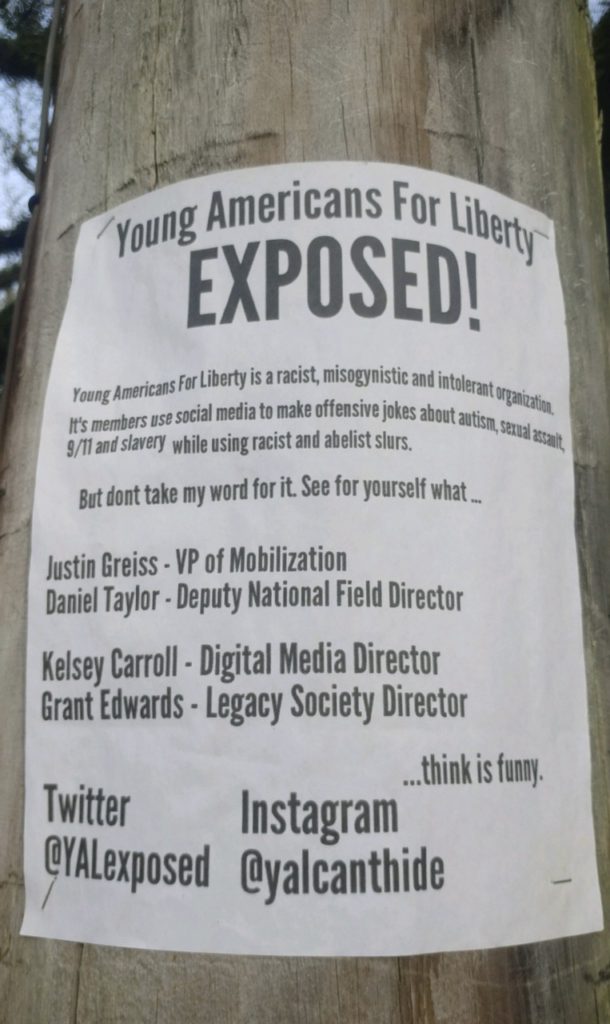 “The investigation into this matter is ongoing, and it is not clear at this time what motivated the crime,” said the university’s Director of Public Relations Michael Strecker to Breitbart News, “The Tulane University Police Department responded quickly and professionally and identified three suspects after viewing security camera footage.”

“Tulane University is committed to protecting the safety of all in our community,” added Strecker.

The three suspects have been arrested for aggravated arson, according to general counsel of the Orleans Parish Sheriff’s Office Blake Arcuri. Money and Shelton are students at Tulane University, and Okami attends Brown University, according to a report by WWL-TV.

In Louisiana, aggravated arson is defined as “the intentional damaging by any explosive substance or the setting fire to any structure, watercraft, or movable whereby it is foreseeable that human life might be endangered” and can face a penalty of “imprisoned at hard labor for not less than six nor more than twenty years.”

This is a developing story. Follow Breitbart News for updates.