A teacher at Watson B. Duncan Middle School in Palm Beach Gardens, Florida, is reportedly under investigation after students took a quiz which contained a question describing President Donald Trump as an “idiot.”

The test question was initially made public by a concerned parent who, while reviewing his child’s quiz, saw that “idiot” was one of the words used to describe the President of the United States.

The parent took a photo of quiz question, which offered the names of four U.S. presidents as multiple choice answers. 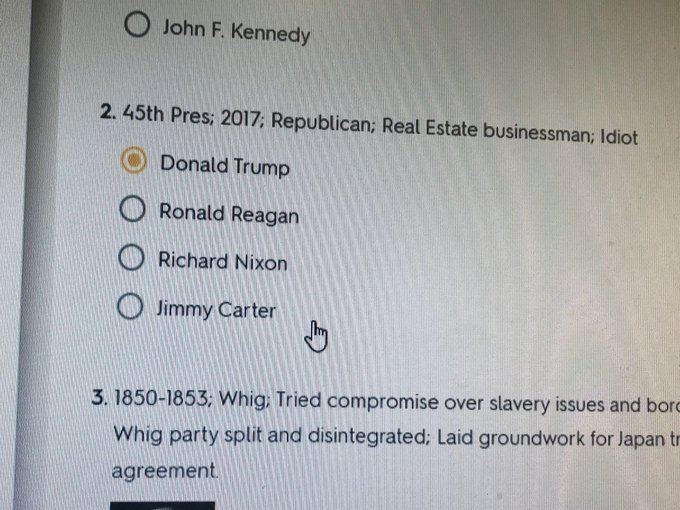 The parent told Breitbart News that he addressed the issue with school administrators the following day, which in turn, resulted in the school’s principal sending an email to all parents of Duncan Middle School students.

“Hello Duncan Middle School Parents, this is Principal Philip D’Amico,” began the email. “A question on a quiz given by your child’s Computer Applications teacher yesterday was brought to my attention this morning. The question was inappropriate and demonstrated an unacceptable lack of good judgment on the part of the teacher.”

“An investigation is now underway, and the teacher has been reassigned during this process,” added D’Amico. “Because this is an open inquiry, I am not at liberty to share any additional details with you at this point. I apologize for this incident, and for the offensive verbiage used in the question.”

The test question was hosted on the “Quizlet” platform, an application used in the school’s online portal to distribute quizzes to students. The parent told Breitbart News that the controversial quiz question has since been removed from the portal.

The teacher in question has apparently been reassigned while an investigation is conducted into the mater.

The Palm Beach School District did not respond to Breitbart News’ request for comment.