LaCorte News was founded by former Fox News executives Ken LaCorte and John Moody. The site focuses on media bias and online censorship, and had recently been reporting heavily on the “whistleblower” media blackout.

Both LaCorte and Moody had long careers in the highest levels of the mainstream media. LaCorte ran FoxNews.com for over a decade, while Moody served as Executive Editor and Executive Vice President of Fox News. Prior to that, he was CEO of NewsCore, the internal wire service of Rupert Murdoch’s News Corporation.

The ban of LaCorte News and other LaCorte-owned publications came soon after Facebook threatened to remove any pages that named the alleged whistleblower, Eric Ciaramella.

“First Facebook temporarily suspended us for reporting the whistleblower’s name,” said founder Ken LaCorte. “We complied, and the suspension was lifted. Shortly after we posted an image about the blackout – with the whistleblower’s name obscured — the company wiped out all of our pages on Facebook, Instagram and the personal accounts of me and a number of the company’s writers and editors.”

The ban came minutes after LaCorte posted this final image on its Facebook page. 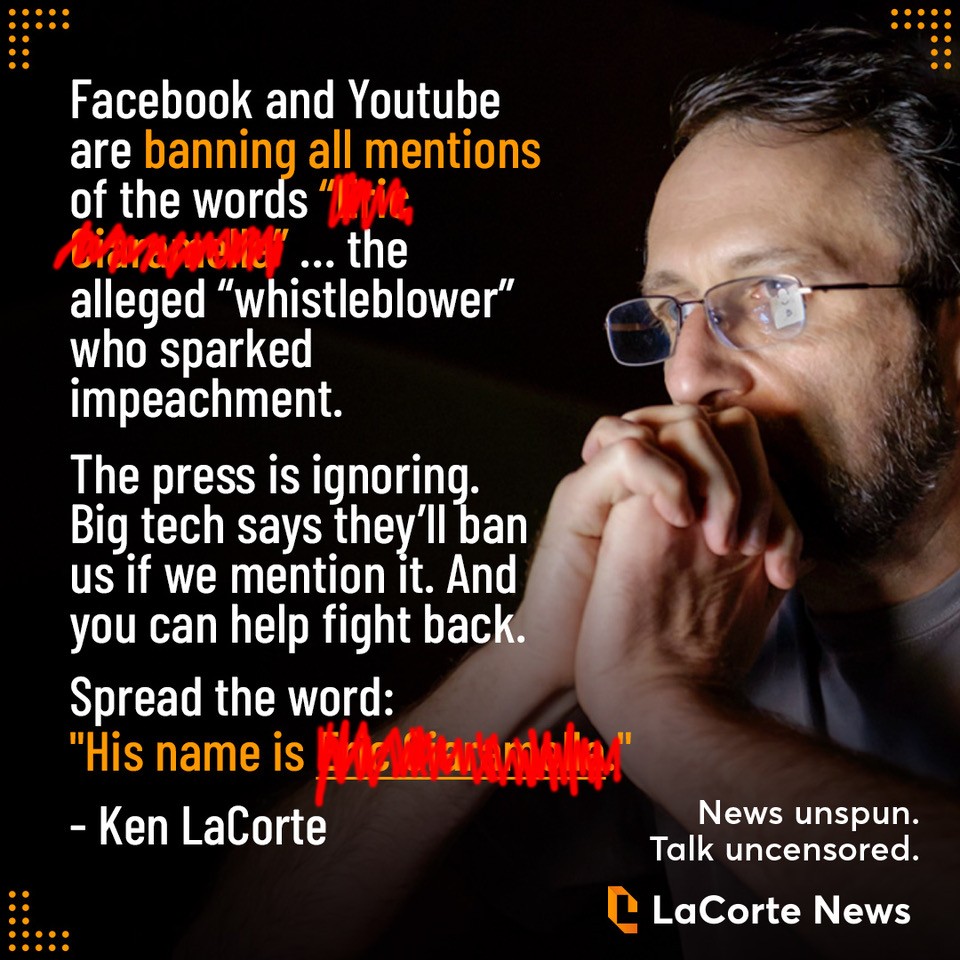 “They said not to post his name, so we censored ourselves but still got wiped out,” said LaCorte. “We, an American news site, literally removed information about a central figure in the impeachment inquiry of a U.S. president to make Facebook happy. Evidently, that wasn’t enough. It’s Orwellian”

After ignoring LaCorte’s request for an explanation, a Facebook spokesman told Breitbart News it had taken down LaCorte-owned publications because of “spam and misrepresentation,” although he did not provide any specific examples of this behavior.

“We routinely take action when we find violations of our Community Standards, including financially motivated activities like spreading clickbait content,” said the spokesman. “In this case, we removed a number of these pages and accounts for violating our policies including against spam and misrepresentation.”

In a statement, LaCorte News said that the entire focus of the site, which was founded in 2018, is media bias and online censorship. “The irony is not lost on us,” LaCorte concluded.