Rep. Tom Reed (R-NY) visited Binghamton University in New York, where he joined members of the school’s College Republicans and Turning Point USA (TPUSA) groups at their recruitment table on campus. The congressman’s visit arrives on the heels of conservative students suffering multiple instances of harassment and free speech suppression perpetrated by leftists at the school.

Last November, a mob of leftist students at Binghamton University surrounded and harassed College Republicans and TPUSA student members on campus while they tried to recruit members to their groups. The leftists shouted obscenities at the conservative students, and flipped over and dismantled their recruiting table.

Days later, a crowd of leftist protesters barged into a College Republicans event featuring economist Dr. Arthur Laffer. The behavior of the leftists caused the event to immediately be shut down. Two protesters were arrested, and the actions were caught in a series of disturbing videos.

To make matters worse for the conservative students, the school’s student government reacted by banning the College Republicans from reserving rooms and booking events on campus.

“A few conservative students were promoting an event featuring the renowned economist Art Laffer,” said President Trump, adding that leftists had stormed the event to shut it down.

“One brave freshman student who faced them down is with us tonight,” he added. “Lacy Kestecher — come up [to the stage], Lacy.”

“We need to bring back freedom of speech on our campuses,” said Kestecher at the TPUSA event. “We cannot let these radical leftists continue to suppress our speech — we all have the God-given right to express our point of view, and to be able to have our inalienable rights.”

On Tuesday, Rep. Tom Reed arrived on campus, where he joined the conservative students at their TPUSA recruitment table, and conducted a “Prove me Wrong” event — the subject of the event being whether free speech should be guaranteed to students. 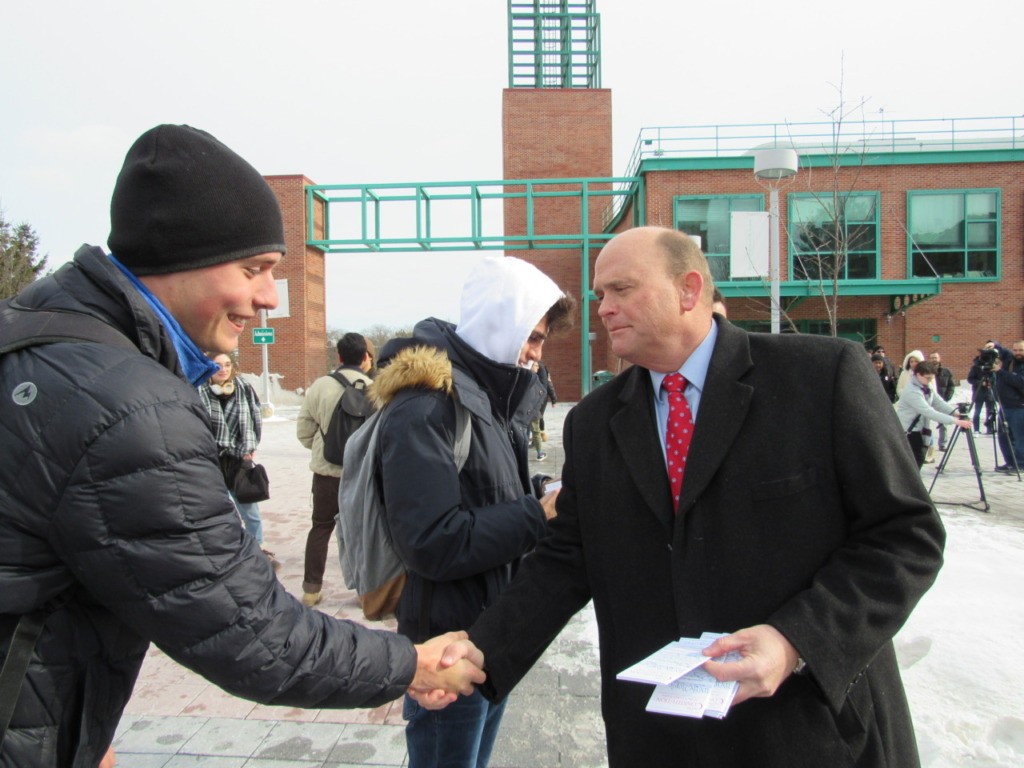 Binghamton University College Republicans chapter president Jon Lizak told Breitbart News that while his group and TPUSA tabled with Rep. Reed on campus, the Congressman “spoke with many students, both supporters and opponents of our ideas, and overall had a very productive discussion.”

Lizak added that the conservative students also expressed to Reed their concerns with “the current situation on campus regarding our freedom to assemble and speak our minds on campus.”

“Afterwards, we went to the administration building to speak with President Stenger about the situation,” said Lizak. “President [Harvey Stenger] agreed that many things went horribly wrong back in November, which should be made right in the future, and said he wants to work with our organization when we do similar events to our Arthur Laffer event.”

“The meeting was productive, but it is only the beginning of a much longer conversation about the promotion of free speech that will be had on this campus,” said Lizak.

Klestecher, who was also present at the meeting, told Breitbart News that both Stenger and the school’s Vice President for Student Affairs Brian Rose said that despite student government deciding to cut funding for College Republicans and revoke the group’s ability to reserve a room, the student government is bipartisan and does not favor a particular political ideology.

Klestecher added that both Stenger and Rose agreed that the protesters acted uncivilly and that they recognize how the instances last semester were unacceptable and pose free speech concerns on the university’s campus.

“They [agreed] that all students should be able to speak their political beliefs without facing aggressive push-back from other students,” said Klestecher.

TPUSA representative Taylor Cisinski told Breitbart News that Stenger and Rose said they would “do everything to try and make sure the club can host successful events” in the future.

Binghamton University did not respond to Breitbart News’ request for comment regarding what measures will be taken to ensure that First Amendment rights of their students are upheld and that instances such as last semester’s failed event featuring Laffer do not reoccur.