Update: After this article published, Twitter took its censorship of President Trump to a new level by actively deleting the President’s tweets, including a video calling on supporters to peacefully disperse. Twitter also suspended the President’s account for 12 hours, and threatened to ban him permanently from the platform.  The deletion came after Twitter first censored the video and tweets from Trump, preventing users from liking, retweeting, or replying to the tweet because of a “risk of violence.”

The Twitter Safety team tweeted about the company’s action against President Trump:

As a result of the unprecedented and ongoing violent situation in Washington, D.C., we have required the removal of three @realDonaldTrump Tweets that were posted earlier today for repeated and severe violations of our Civic Integrity policy. https://t.co/k6OkjNG3bM

The company then stated it would “permanently suspend” Trump from the platform if he violated its policies:

Future violations of the Twitter Rules, including our Civic Integrity or Violent Threats policies, will result in permanent suspension of the @realDonaldTrump account.

In the video, President Trump reiterated his claim that the presidential election was stolen while calling on his supporters to respect law enforcement and peacefully disperse. 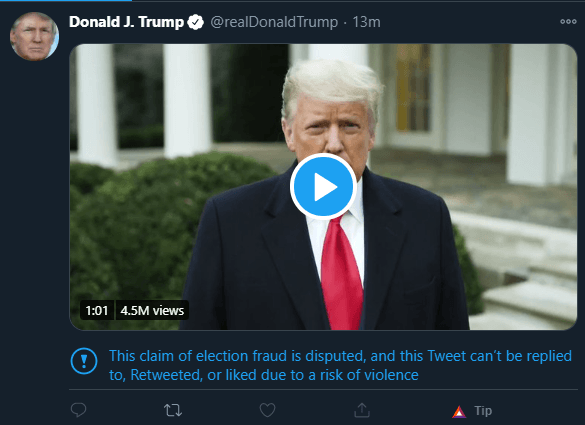 “I know your pain. I know your hurt. We had an election that was stolen from us. It was a landslide election and everyone knows it, especially the other side. But you have to go home now,” said the President.

“It’s a very tough period of time. There’s never been a time like this, where such a thing happened, where they could take it away from all of us; from me, from you, from our country. This was a fraudulent election.”

“But we can’t play into the hands of these people. We have to have peace. So go home. We love you, you’re very special, you’ve seen what happens, you see the way others are treated who are so bad and so evil. I know how you feel. But go home, and go home in peace”

Please support our Capitol Police and Law Enforcement. They are truly on the side of our Country. Stay peaceful!

I am asking for everyone at the U.S. Capitol to remain peaceful. No violence! Remember, WE are the Party of Law & Order – respect the Law and our great men and women in Blue. Thank you!

This was the third message Trump posted on Twitter calling for peace after people holding Trump flags stormed the U.S. Capitol Building and clashed with police.

“I am asking for everyone at the U.S. Capitol to remain peaceful,” tweeted the President earlier in the afternoon.

“No violence! Remember, WE are the party of Law & Order – respect the Law and our great men and women in Blue. Thank you!”

“Please support our Capitol Police and Law Enforcement. They are truly on the side of our Country. Stay peaceful!”