Australia Prime Minister Scott Morrison said Friday other countries are lining up behind Canberra’s drive to regulate Big Tech companies and force them to pay for local news.

Canada, India, France and the UK are just a few of the countries Morrison pointed to as preparing to emulate Australia in its stand for democratic principles against monopolistic mayhem.

The conservative coalition leader spoke just 24-hours he branded Facebook’s move to block news in the country as “arrogant,” warning against “Big Tech companies who think they are bigger than governments and that the rules should not apply to them,” as Breitbart News reported.

He said Facebook’s ban constituted a “threat” before adding:

I would just say to Facebook, this is Australia you want to do business here you work according to our rules, and that’s a reasonable proposition.

We’re happy to listen to them on on the technical issues of this, just like we listened to Google and came to a sensible arrangement.

But the idea of shutting down the sort of sites they did yesterday as some sort of threat.

Facebook’s bungled blockade drew widespread criticism for denying access to several critical government pages, including emergency services, health departments and the national weather service — with most restored in the hours after it came into effect.

Asked whether he expected to receive international support from other nations following Facebook’s controversial move, Morrison said  he spoke to Indian Prime Minister Narendra Modi on Thursday about the issue, among other world leaders including Canadian leader Justin Trudeau.

“People are looking at what Australia is doing,” he said, before adding he had enjoyed “exchanges also with Prime Minister Trudeau, and I know Prime Minister Johnson is very interested.

“I’ve spoken to President Macron about these things, in the same way we talk about that they should pay tax too. And we discuss that a lot.”

Facebook said on Thursday the proposed Australian law “fundamentally misunderstands the relationship between our platform and publishers who use it,” indicating it is not yet ready to submit to Canberra. 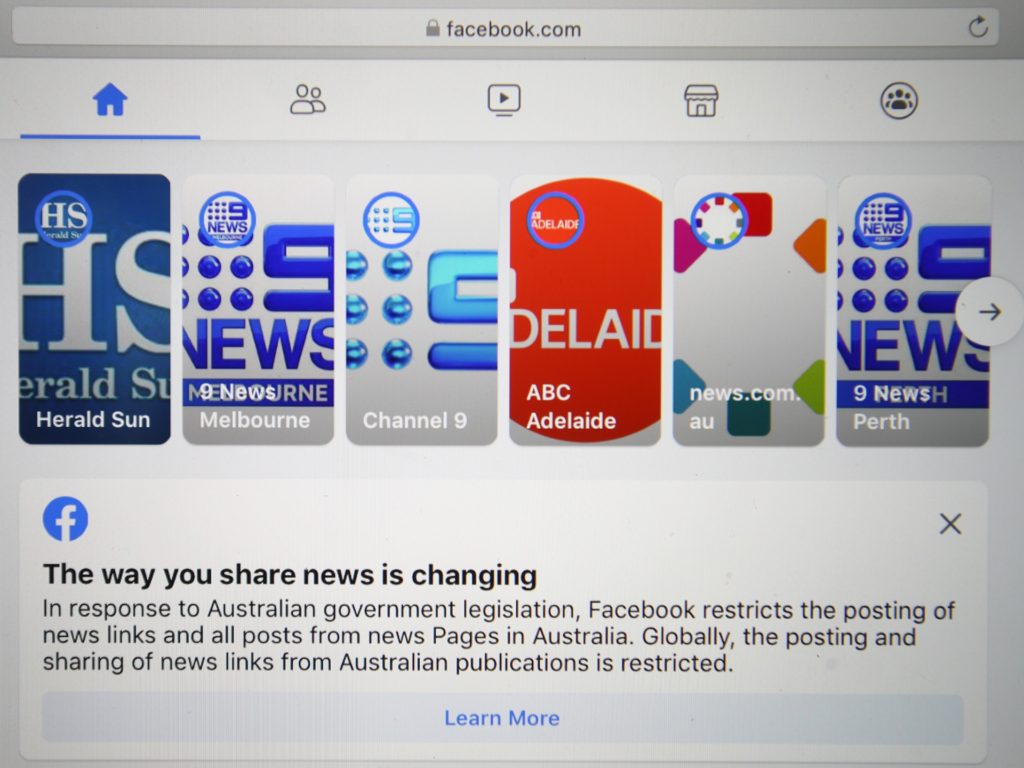 Various news sites are seen on Facebook on February 18, 2021 in Melbourne, Australia. Facebook has banned publishers and users in Australia from posting and sharing news content as the Australian government prepares to pass laws that will require social media companies to pay news publishers for sharing or using content on their platforms. (Robert Cianflone/Getty Images)

Morrison retaliated by saying his government was “happy to listen to them on the technical issues,” but remained determined to press ahead.

“It’s not OK to unfriend Australia because Australia is very friendly,” Morrison said. “We’d like to remain very friendly and it’s time for them to friend us again.”

Last year, Facebook announced it would pay U.S. news organizations including the Wall Street Journal, the Washington Post and USA Today for headlines. No financial details were released.

In Spain, Google shut down its news website after a 2014 law required it to pay publishers, AP reports.