Harvard University’s more than 40 chaplains have unanimously elected an atheist to be the new president of its chaplains’ organization.

Greg Epstein, 44, a humanist who was raised in a Jewish household, will begin as president of the Harvard chaplains this week.

I'm obliged and honored to share personal news: I've been elected president of my @HarvardChaplain colleagues, and the brilliant @emmabgo wrote about it for the @nytimes. Will add a here, later today.

"The New Chief Chaplain at Harvard? An Atheist."https://t.co/m5rZEqHnQV

“There is a rising group of people who no longer identify with any religious tradition but still experience a real need for conversation and support around what it means to be a good human and live an ethical life,” Epstein, the author of Good Without God, told the New York Times.

“We don’t look to a god for answers,” he said. “We are each other’s answers.”

Epstein, who also serves as humanist chaplain at Massachusetts Institute of Technology (MIT), has served as Harvard’s humanist chaplain since 2005 and, according to the Times, has been “teaching students about the progressive movement that centers people’s relationships with one another instead of with God.”

I have tried to show my kid around a paper copy of @nytimes on a weekly basis since he was 2 or 3, and I want to say that bought me 1 second of excitement from him, to see his dad's picture in print today. But I don't want to overstate the case!

According to his bio, Epstein’s special areas of interest include “ethics in technology; meaning and purpose beyond religion; existentialism and humanism in literature and popular culture; developing healthy masculinity from a feminist perspective; secular humanistic Judaism; racial justice and healing; and the philosophy and practice of interfaith work.”

“Greg is known for wanting to keep lines of communication open between different faiths,” she said.

The Times reported Epstein mentors “dozens of students” who “have found a source of meaning in the school’s organization of humanists, atheists and agnostics,” as young people in America have grown increasingly secular.

“Greg’s leadership isn’t about theology,” Charlotte Nickerson, 20, an electrical engineering student, said. “It’s about cooperation between people of different faiths and bringing together people who wouldn’t normally consider themselves religious.”

A recent survey from the Cultural Research Center (CRC) at Arizona Christian University found young Americans are reshaping the country with a philosophy of life that rejects faith in God and organized worship.

The American Worldview Inventory (AWVI) 2021, an annual survey that examines the perspectives of adults aged 18 and over in the United States, found that while 57 percent of Millennials (born 1984-2002) consider themselves to be Christian, 43 percent “don’t know, care, or believe that God exists.”

These young people define success and morality in terms of personal happiness and economic social justice, the survey found, observing only 48 percent of Millennials say one should “treat others as you want them to treat you.” 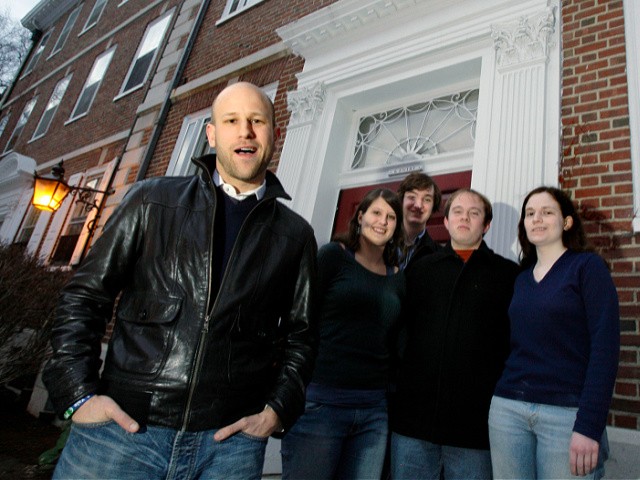 Greg Epstein, left, the humanist chaplain at Harvard University, poses with students after a group meeting on campus in Cambridge, Mass., Friday, March 6, 2009. Harvard students, from left, are sophomore Kelly Bodwin; sophomore Lewis Ward; sophomore Andrew Maher; and sophomore Greta Friar. Epstein envisions local humanist centers nationwide that perform many of the community-building functions of a church, only in service of the humanist creed, which he sums up as a commitment to living ethical, personally fulfilling lives while serving the greater good. (AP Photo/Elise Amendola)

Epstein, reported the Times, often counsels students who are struggling with both personal and theological issues, helping them cope with anxiety about everyday issues, such as job-hunting, family arguments, and the pressures of dealing with social media.

Some of the students who are attracted to Epstein’s humanist group have left their traditional faiths.

Adelle Goldenberg, 22, the Times observed, was raised in the Hasidic community in Brooklyn but found herself drawn to Epstein’s humanist group. She described being mentored by Epstein as almost like having a secular rabbi.

“When the pandemic hit I was like, ‘Greg, do you have time to talk about the meaning of life,’” Goldenberg said. “He showed me that it’s possible to find community outside a traditional religious context, that you can have the value-add religion has provided for centuries, which is that it’s there when things seem chaotic.”

Fox News reported, however, that the election of an atheist as head chaplain at Harvard has drawn some criticism.

One Twitter user said, “Completely missing the point of the role of a chaplain,” adding as well the election makes the Harvard label “less prestigious”:

Making that Harvard label less prestigious by completely missing the role of a chaplain. Nicely done, you dopes.

Why is he a chaplain then??? https://t.co/H0OVLqVUCb

It sounds like a grift. At the very least it shows that Harvard regards atheism as a more than suitable alternative to religious belief. No surprise there,but they have deprived the students of a legitimate chaplain.

The Times cited a Pew Research Center poll, published in October 2019, that found the decline of Christianity continuing rapidly in the country, with more than 20 percent of the country now defining as atheist, agnostic, or nonreligious, including four in ten Millennials.

Nevertheless, Pew also found in February 2019, that actively religious people are much more likely than those who are less religious to describe themselves as “very happy.”