Everything that makes the far-left CNN a danger to our country was on display at the White House Thursday afternoon when the fake news network’s Brian Karem was caught on video inciting violence.

Karem, who is also Playboy’s White House correspondent, earned a second job as an analyst for CNN after he melted down during a 2017 White House briefing.

In light of his erratic and threatening behavior yesterday, it is a notable piece of irony that CNN hired Karem after he accused White House Press Secretary Sarah Huckabee Sanders of “inflaming everybody” over her criticism of the media.

“You’re inflaming everybody right here and right now with those words,” Karem whined.

“We’re here to ask you questions, you’re here to provide the answers, and what you just did is inflammatory to people all over the country who look at it and say, see, once again, the President is right and everybody else out here is fake media. And everybody in this room is only trying to do their job,” he added.

Those looking for an additional layer of irony need only read his Playboy essay explaining that meltdown.

And yet, just two years later, Karem has been caught on video assuming the role of an inflammatory bully while he is supposed to be a professional observer of events among the White House press corps. 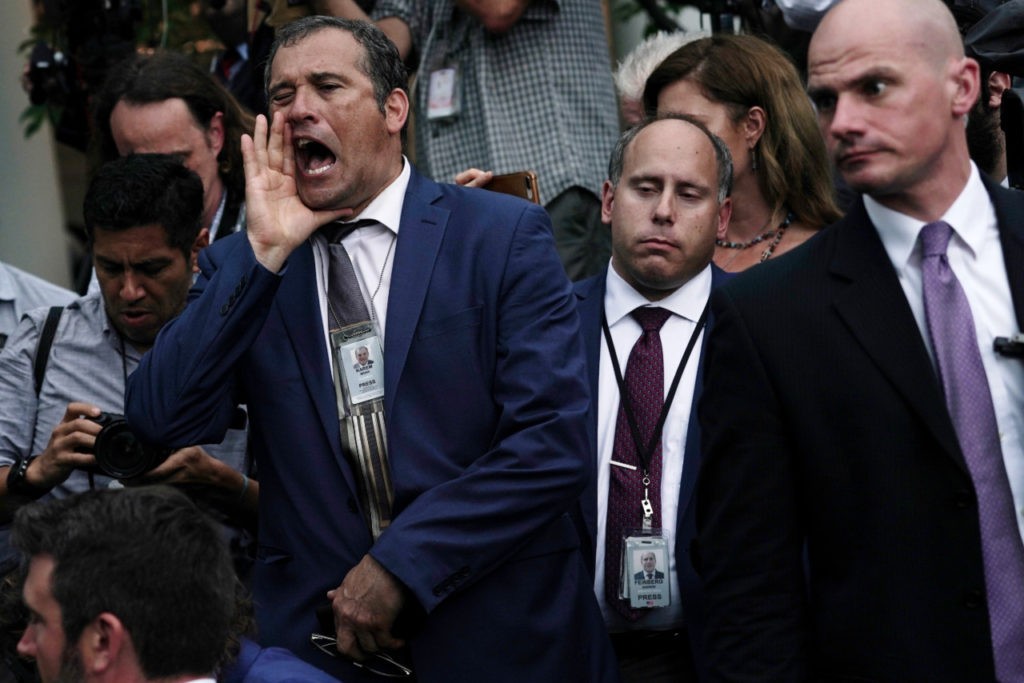 WASHINGTON, DC – JULY 11: Brian Karem of Playboy Magazine argues with conservative military and intelligence analyst and former deputy assistant to President Donald Trump Sebastian Gorka (not pictured) after the President made a Rose Garden statement on the census July 11, 2019 at the White House in Washington, DC. (Alex Wong/Getty Images)

First, as the videos below show, Karem openly heckles and provokes a group of online journalists and influencers invited to the White House Rose Garden for a meeting with President Trump.

Karem then attempts to incite violence against one of the invited guests, Trump’s former deputy assistant Sebastian Gorka, by daring him to step outside for a fight.

Finally, when confronted with his incitement to violence, Karem blatantly lies about what he said.

In this first video, Karem appears to be razzing and getting razzed by one of Trump’s guests (who is off-camera), but he then seeks to escalate the situation and spread the overall tension by heckling the entire group.

“This is a group of people who are  eager for demonic possession,” he says to everyone.

At this point, you can hear Gorka respond off camera: “And you’re a journalist…?”

Karem immediately responds with a call to violence.

“Hey, come over her and talk to me, brother.  We can go outside and have a long conversation,” he says winking.

A call to “go outside” is a call to violence, a call to physically assault someone.

My $$$ was on Seb as I note pic.twitter.com/yXfJfOKaZT

But it is in this second video, after a short confrontation with Gorka and a talking to by a Secret Service agent, Karem is caught repeatedly lying about inciting violence.

“I said I would talk to him. I didn’t threaten him,” Karem says when confronted by a White House guest about his call to “go outside.”

“We were just gunna talk,” he says, compounding the lie.

“I didn’t threaten to kick his butt,” Karem adds, lying again. “I said I would talk to him.”

Karem then scurries away.

My friends, THIS is CNN…

And this has been CNN ever since the network installed Jeff Zucker as its chief.

Over the last six or so years, Breitbart News has exhaustively documented the fake news outlet’s embrace of political violence, especially against Trump and his supporters, and now CNN’s desire to provoke violence has entered the White House.

Heckling, violence, and lies are résumé enhancers at CNN, a way to get an easy promotion and raise.

And this is why CNN is a legitimate danger to our society.

Some 90 million people subsidize CNN, even though fewer than one million actually watch.