CNNLOL isn’t even trying to tell the truth anymore and is obviously using its “Facts First” fact checks as a means to deliberately misinform and troll.

During Tuesday night’s debate, President Trump reminded the public that even before the coronavirus had taken a single American life, he stopped all incoming travel from China, which was where the virus originated and where there were massive spread and death at the time.

Trump said of his China travel ban, “I closed it, and you said, ‘He’s xenophobic. He’s a racist, and he’s xenophobic’ because you didn’t think I should have closed our country.”

CNNLOL ruled that claim as dubious for the following reason (sorry, I don’t link fake news): “It’s not clear Biden even knew about Trump’s China travel restrictions when he called Trump xenophobic on the day the restrictions were unveiled; Biden has never explicitly linked his accusation of xenophobia to these travel restrictions.”

CNNLOL then goes on to explain that Biden accused Trump of “hysterical xenophobia” and “fear-mongering” on January 31 and that it’s possible “Biden did not know about the restrictions at the time of his speech because his campaign event in Iowa started shortly after the Trump administration briefing where the restrictions were revealed.”

And the reason CNN thinks that’s possible is that’s what the Biden campaign told them… Oh, yeah, just a coincidence we attack Trump as “xenophobic” on the same day he instituted the travel ban. Big-ass coincidence. Biden was really all for it.

And CNNLOL being CNNLOL, it took dictation from the Biden campaign and presented it as fact because “Facts First” n’ stuff.

Except, as you’ll see below, we have Joe Biden responding directly to Trump’s tweet about the China travel ban by attacking the president as — wait for it, wait for it — “xenophobic!”

On March 18, 2020, Trump tweeted, “I always treated the Chinese Virus very seriously and have done a good job since the beginning, including my very early decision to close the borders from China — against the wishes of almost all. Many lives were saved. The Fake News new narrative is disgraceful & false!”

To which Biden responded, and I quote, “Stop the xenophobic fear-mongering. Be honest. Take responsibility. Do your job.”

And here’s the screenshot… 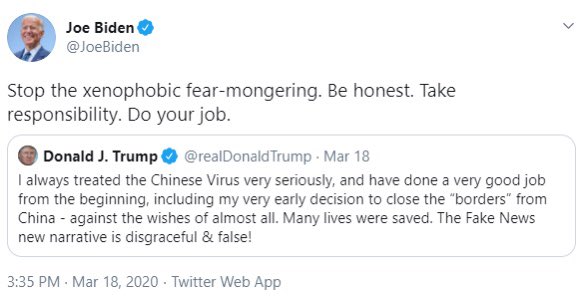 A lie of omission is still a lie.

It’s hoping to misinform just enough people to defeat Trump next month — and looking to troll everyone else.