ABC News referred to Kyle Rittenhouse as an “alleged white supremacist” in a report last week, despite the fact that the 17-year-old has no known ties to white supremacism.

ABC justified the label by citing former Vice President Joe Biden, who has suggested Rittenhouse is a white supremacist in a campaign ad — and who faces a possible defamation lawsuit as a result.

The Daily Wire flagged the ABC report, which said:

Rittenhouse, an alleged white supremacist accused of killing two protesters in Kenosha, Wisconsin, in the wake of an officer-involved shooting, appeared via Zoom for an Illinois hearing where his attorney contested the teen’s extradition to Wisconsin to face homicide and other charges in connection with the August shootings.

Democratic presidential nominee Joe Biden’s campaign has criticized President Donald Trump’s failure to condemn white supremacists. A campaign video featured Rittenhouse on the streets of Kenosha. Attorney Lin Wood, who is helping to raise funds for Rittenhouse’s defense, threatened to sue the Biden campaign for libel on behalf of Rittenhouse in response to the video.

The video showed Rittenhouse with an AR-15 — as well as white supremacists marching in Charlottesville, Virginia. Biden tweeted the video by claiming (falsely) that President Donald Trump had failed to disavow white supremacists during the first presidential debate. 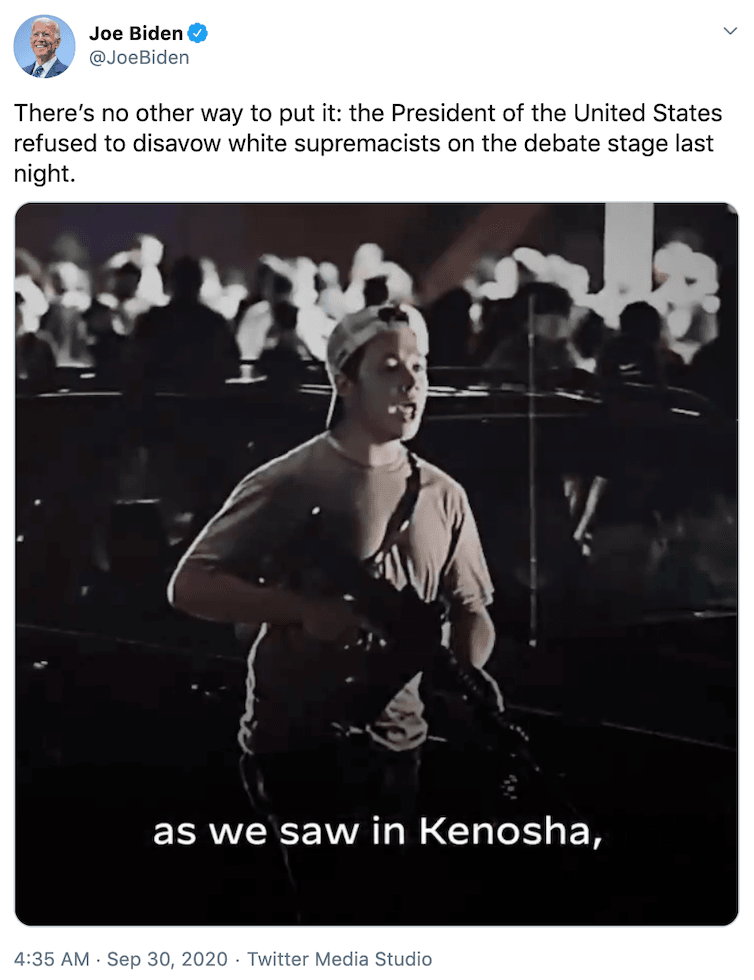 As Breitbart News recently explained: “There is no evidence that Rittenhouse is a white supremacist. He currently faces murder charges in Kenosha, Wisconsin, for shooting three rioters last month, two of whom died. Rittenhouse has argued, citing video, that he acted in self-defense.”

The Daily Wire noted that the Anti-Defamation League, a left-leaning organization, had also admitted that “Rittenhouse has not been linked to any formal extremist group.”