They’re doing it again. The New York Times is aggressively hiding relevant facts on a matter of public interest simply in order to promote the narrative of black victimhood.

OK, we didn’t get away with it last time, but we probably will this time. Let’s try!

Daunte Wright is the half-black man fatally shot by a police officer in Minnesota earlier this year. According to Nexis, he has appeared in well over 100 articles in the Times. But one thing Times readers will never be told is that Wright was facing criminal charges for trying to choke a woman to death while robbing her at gunpoint.

They will also never hear about the lawsuit accusing Wright and an accomplice of shooting a guy during a carjacking.

In a bold departure from customary practice, the Times did make two passing references to another lawsuit claiming Wright shot a guy in the head, permanently disabling him, but in both cases, quickly added: “The lawsuit offers no direct evidence tying Mr. Wright to the shooting.”

And those are just the crimes he’s accused of committing lately, during the brief year and a half since he turned 18 and was no longer treated as a juvenile.

When it comes to Wright’s legal problems, the Times didn’t even pull its usual trick of putting all the interesting information in paragraph 20. These grisly allegations, as set forth in police reports and lawsuits, have been completely, 100 percent censored from the Newspaper of Record.

This isn’t a genteel refusal to “put the victim on trial.” Wright’s short but exciting criminal record is highly relevant to the convulsions this country has been going through since George Floyd’s death at the hands of the police in 2020 — convulsions painstakingly fostered by the Times.

Contrary to the media’s black victimhood narrative, there’s a very good reason Wright was in a position to be confronted by the police and in a way that most people are not.

In addition to allegedly committing a slew of gun crimes before the age of 20 (based on only one year and six months of public records), Wright was stopped for driving with expired license plate tags. He didn’t have car insurance. He also didn’t have a driver’s license. (And yes, white people are busted for these infractions all the time.)

When the officers ran his name, they discovered that Wright was driving on a suspended license, there was a restraining order against him, and a bench warrant for his arrest on a weapons charge. They had no choice: They had to arrest him. But as one officer began to handcuff him, Wright resisted, jumped back in his car, and was about to flee — along with an officer trapped in the passenger window, trying to get control of the gears.

That’s when Wright got shot.

This composite image from two police body cam videos and one dash cam video shows the events of a traffic stop on April 11, 2021, that led to the shooting death of Daunte Wright. The videos were shown in court on December 13, 2021, in Minneapolis, Minnesota, during the trial of former Brooklyn Center police officer Kim Potter for Wright’s death. (Court TV via AP) 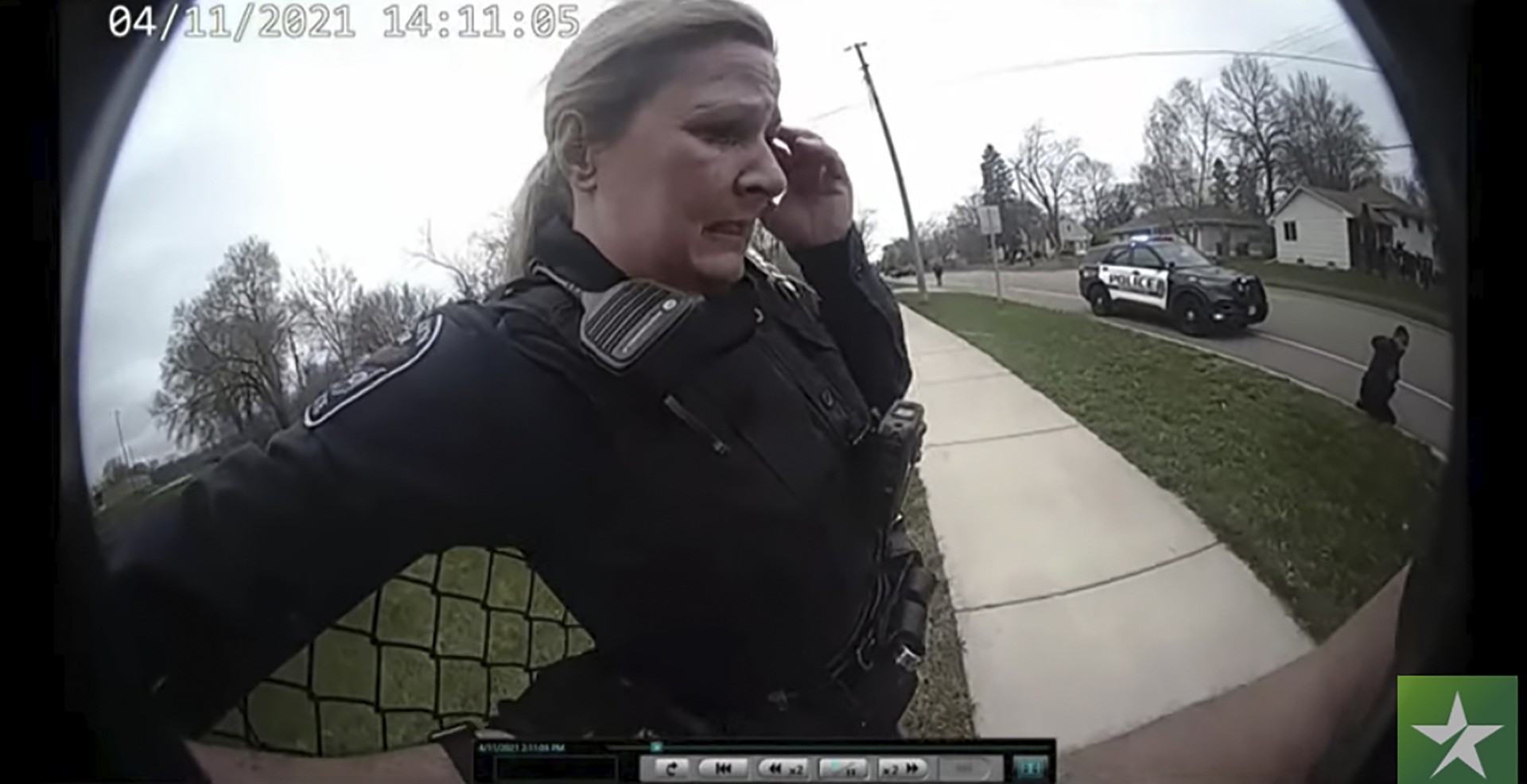 This police body cam image shows former Brooklyn Center police officer Kim Potter’s reaction after shooting Daunte Wright during a traffic stop on April 11, 2021. The video was shown in court on December 10, 2021, in Minneapolis, Minnesota, during Potter’s trial for first- and second-degree manslaughter in the death of Wright. (Court TV, via AP)

In other words, this case isn’t exactly a primo example of “Driving While Black.” That’s why the New York Times hides all the pertinent facts.

For example, last week, the Times finally — glancingly — mentioned Wright’s lack of a driver’s license and insurance. (That’s if you don’t count a recent article about how Minnesota laws adversely affect minorities — “even regulations about driver’s licenses and renewal of tags.”)

On the other hand, the Times has run 16 articles about Wright’s … air freshener! (E.g.: “How a Common Air Freshener Can Result in a High-Stakes Traffic Stop”). That 16 more than all its articles on Hunter Biden’s laptop!

What is the Times talking about? It seems that, immediately after the shooting, Wright’s mother told the media that he’d been stopped merely for having an air freshener hanging from his rearview mirror — AND NOW HE WAS DEAD!

That’s completely untrue, but it’s the story the Times is going with. No new information will be allowed to penetrate the paper’s BLM cocoon.

Times reporters must have heard about the armed robbery/choking incident, because they’ve repeatedly quoted Wright’s accomplice in the crime, Emajay Driver. On April 13, November 30, December 8, and December 17 the Times ran some version of this quote:

“‘He loved to make people laugh,’ said Emajay Driver, a friend of Mr. Wright. ‘He was just great to be around. There was never a dull moment.’”

And that’s all we get from Mr. Driver.

New York Times: Say, we saw that police report about you and Daunte nearly choking a woman to death while committing an armed robbery. So naturally, we have to ask: Do you by any chance have any heartwarming stories about him?

Somewhat more important than Daunte’s love of laughter are the details of that incident, given at length in America’s Greatest Newspaper, the U.K.’s Daily Mail.

On December 1, 2019, Wright and Driver crashed at the apartment of a 20-year-old woman they’d been partying with. The next morning, the woman’s roommate went out to get $820 in rent money, handed it to her, then left for work.

Just before the attack, Wright locked himself in the victim’s bathroom for a noticeably long time in order to make videos of himself with a gun and to empty a bottle of hand sanitizer onto his gun. (Daunte, with his simple, trusting nature, apparently believed an urban legend that sanitizer “blocks” fingerprints.)

Minutes later, as the three of them were exiting the apartment, Wright suddenly blocked the door, pointed the gun at the woman’s head, saying, “Give me the f-ing money. I know you have it.” (Me to the New York Times: Give us the f-ing facts. We know you have them.)

She refused, asking, “Are you serious?” Wright barked, “We’re not playing around,” and grabbed her by the neck, choking her, as she dropped to her knees, with the gun in his other hand still pointed at her head. “You look into his eyes,” the victim later said, “and it’s so evil.”

Next, he tried ripping her shirt open to get the money, perhaps having seen her hiding it in her bra earlier. She screamed, and Wright began choking her again. (As Wright’s accomplice so poignantly said, there was never a dull moment with this guy.)

Finally, Wright and Driver ran off, hopping into a white Cadillac that was waiting for them.

They were arrested five days later. Driver pleaded guilty to first-degree aggravated robbery, his second felony conviction. He was facing 20 years in prison, but only got probation, leading some to speculate that he’d made a deal to testify against Wright.

Again: the Times hasn’t printed a single detail of Wright’s give-me-the-f-ing-money robbery attempt. Or the lawsuit about the carjacking. In one of more than 100 articles, there were two brief mentions of his alleged shooting a guy in the head.

As for the trial of Kim Potter, the officer who shot Wright, neither the prosecution nor defense disputes that it was a mistake, that she thought she was holding her Taser. Several officers, and the defense’s use-of-force expert, testified that Potter would have been fully justified in shooting Wright in order to protect the other officer from being dragged by the car.

But Wright “loved to make people laugh.” That’s all the Times wants you to know.