Law firms representing President Donald Trump in election lawsuits are under relentless assault by the Twitter blue check leftist mob as well as other various anti-Trump personalities and groups which have threatened to blacklist and tarnish the reputation of both the firms as well as their employees and clients.

With the Trump team planning fresh legal challenges in Georgia, Arizona, and Pennsylvania, and with campaign staff being redeployed to these areas, the election battle appears far from over.

Jones Day, one of the country’s largest law firms, is the most prominent firm representing President Trump and the Republican Party as they prepare to wage a legal war challenging the election outcome.

As a result, the litigation powerhouse has received a slew of threats in recent days.

Chicago Tribune columnist Rex Huppke called for the firm to be “dragged through the mud.”

“Firms like @JonesDay and any others representing Trump in these outlandish election lawsuits should be dragged through the mud,” his tweet read. “Their other clients should know how Americans feel about firms willing to undermine our democracy. The PR shitstorm this stirs up should be blinding.”

Firms like @JonesDay and any others representing Trump in these outlandish election lawsuits should be dragged through the mud. Their other clients should know how Americans feel about firms willing to undermine our democracy. The PR shitstorm this stirs up should be blinding.

Former Clinton Press Secretary and CNN political analyst Joe Lockhart called on those represented by Jones Day to “let them know how you feel about all this.”

NEW:@ProjectLincoln is launching a TV and social media campaign targeting @JonesDay for any role it plays in enabling Trump's efforts to overturn the election, I'm told.

In a highly provocative move, the PAC — which has nearly 3 million Twitter followers — began publicizing images and contact information of individual attorneys in a recently deleted tweet, encouraging others to “make them famous” followed by a skull and crossbones flag. 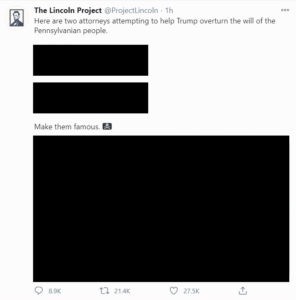 Lincoln Project co-founder and prominent Never Trumper Rick Wilson endorsed a tweet that read, “Every one of the lawyers who Trump uses in [an] effort to suppress the vote should be exposed. Their firms should be held accountable. Corporate clients should be asked why they are working with lawyers who are trying to derail democracy. Hold them responsible.”

Marc Elias, the current lead Democrat lawyer who pushed vote-by-mail this past election and was behind the 2016 “Russia dossier,” demanded lawyers “show some courage” lest they be deemed “complicit” in undermining democracy.

“It’s high time for anyone who works at @JonesDay to condemn and combat your own firm’s assistance to Donald Trump’s election theft — or to resign,” he wrote.

It’s high time for anyone who works at @JonesDay to condemn and combat your own firm’s assistance to Donald Trump’s election theft — or to resign. https://t.co/MgKq2g9iMV

The firms of @JonesDay and @PorterWright are involved in the illegal effort to overthrow this election. Take note. Never forget. 🇺🇸

In a warning to companies working with the firms, some expressed less-than-subtle threats.

“Why is @JonesDay aiding and abetting the Trump administration’s attempt to delegitimize our democracy?” wrote executive producer Warren Leight. “What do @JonesDay clients like @CBS @Siriusxm @Sony and @google think about this?”

“Anybody who continues to work at Jones Day should be utterly ashamed,” wrote Slate correspondent Jordan Weissmann.“You’re implicated.”

The firm’s work for President Trump has also resulted in a “Jones Day, Hands Off Our Ballots” mural painted on the street outside its San Francisco offices late last week.

A new mural popped up in #SanFrancisco in response to President Donald Trump's lawsuits to battleground states in the #Election2020. The mural is outside the offices of @JonesDay, a law firm the mural alleges is representing Trump. @sfchronicle pic.twitter.com/uVyWQPiUPP

In recent days, two Jones Day lawyers said they had faced heckling from friends and others on social media about working at a firm that is supporting the president’s efforts. In addition, a boycott page as well as a unique hashtag (#BoycottJonesDay) were created to garner public support for blacklisting the firm.

Jones Day, one of Trump’s most steadfast legal advisers, was relied upon heavily by President Trump for his 2016 campaign, with Jones Day partner Don McGahn appointed as his top lawyer in the White House on his inauguration.

McGahn in turn brought a string of Jones Day partners and lawyers into the administration.

In Pennsylvania, Ronald Hicks, a partner in the Pittsburgh office of the Ohio-based Porter Wright law firm and co-chair of the firm’s election law practice, is leading the Trump campaign’s legal charge.

Along with Jones Day, the firm has also received its share of threats.

Vice President of product & growth at Dropbox, Adam Nash, warned that the firms ”should be worried” as “their names will be tarnished for a decade or more.”

These law firms should be worried. Their names will be tarnished for a decade or more. Jones Day. Porter Wright. https://t.co/MMW9CMIIyL

If @PorterWright has no shame working on behalf of @TrumpTeam to throw out more than 100,000 votes of African Americans with a ridiculous lawsuit, then their willingness to undermine black suffrage should haunt them forever & deservedly destroy their reputation @NAACP @NAACP_LDF

In another tweet, Eichenwald demanded that every lawyer who “attacks our democracy” “should pay a steep price for it” for “we defend our democracy by shaming those who undermine it.”

He also predicts that either “angry millions” will “rage at them for decades” or “angry mobs head to their offices first.”

Here's what's going to happen: @JonesDay & @PorterWright lose their lawsuits attempting to overthrow American democracy. Angry millions still rage at them for decades. Or, they succeed in throwing out 1 million votes & overturn an election. Angry mobs head to their offices first.

Failed presidential candidate and Never Trump activist Evan McMullin called for every American to know the law firms which “undermine American democracy” while calling for “patriotic employees” at the firms to “resign if their firms continue this shameful work.”

Journalist Chris Geidner stated that he was glad to see “the growing ignominy that @JonesDay and @PorterWright are facing and should face if they continue to aid Trump in his efforts to debase our democracy.”

“I don’t know how anyone can in good conscience do business with these firms,” wrote progressive journalist Josh Marshall.

“They deserve scorn for their actions,” wrote economist David Rothschild.

The Jones Day firm has already filed several lawsuits challenging the election in Pennsylvania, and on Monday evening lawyers at Porter Wright filed a suit in federal court in Pennsylvania against the PA secretary of state and a number of county election boards alleging “irregularities” in state-wide voting.

This is just the latest in a growing call from Democrats, media, and establishment left to criminalize and blacklist Trump supporters while seeking to ruin people personally.

As Breitbart News reported, recrimination against Trump supporters has been voiced notably by a far-left Slate editorial demanding presidential adviser Stephen Miller be imprisoned; by Rep. Alexandria Ocasio-Cortez (D-NY) calling for recriminations against White House officials as well as all Trump supporters; and Washington Post staffers calling for anyone associated with the Trump administration to be blacklisted from holding a job and ostracized from “polite society.”

“Any R[epublican] now promoting rejection of an election or calling to not to follow the will of voters or making baseless allegations of fraud should never serve in office, join a corporate board, find a faculty position or be accepted into ‘polite’ society,” Post columnist Jennifer Rubin tweeted, adding, “We have a list.”

Any R now promoting rejection of an election or calling to not to follow the will of voters or making baseless allegations of fraud should never serve in office, join a corporate board, find a faculty position or be accepted into "polite" society. We have a list.

President Trump has refused to concede and has received much support from within the party.

“I think there is a very legitimate question being asked now by the American people and by Pennsylvanians as to what happened and how did this happen,” U.S. Rep. Mike Kelly (R-PA) said in an interview Monday.