The U.S.-based Family Research Council (FRC) has denounced the “bloodbath” taking place in Nigeria, as radical Islamists carry on a largely unreported slaughter of the nation’s Christians.

The “dangerous darkness” of radical Islam with its genocidal intentions is sweeping across the African continent and is particularly lethal in Nigeria, Lela Gilbert writes for FRC.

In recent decades, “tens of thousands of Nigerians have been slaughtered,” Gilbert writes, and yet “their stories rarely appear in mainstream Western news reports” despite the fact that it is “increasingly clear that another genocide is already taking place.”

Gilbert cites a number of the most recent examples of the ongoing carnage, such as the Islamist massacre of 81 people during an attack on Foduma Kolomaiya village in northeast Nigeria earlier this month as well as twin attacks that killed 20 soldiers and more than 40 civilians in Borno State on June 13.

Similarly, jihadists recently gunned down a Nigerian Christian pastor along with his wife who were working on their farm in Taraba State, leaving orphaned the couple’s eight children, ages 1 to 19, Gilbert notes.

“In what is being noted as systematic direct war against Christianity in Nigeria, pastors, Christian leaders and seminarians are either being kidnapped or killed every week,” read a statement from the Hausa Christians Foundation following the murders. “Christians in Nigeria have been the target of many attacks by the vicious Boko Haram jihadist Islamist terrorists, herdsmen attacks and many other kidnappings in recent times.”

“Brethren, the body of Christ is suffering so much harm in the hands of these evil jihadists. The government of Nigeria seems to care less about the plights of Christians [in] Nigeria,” the statement said. 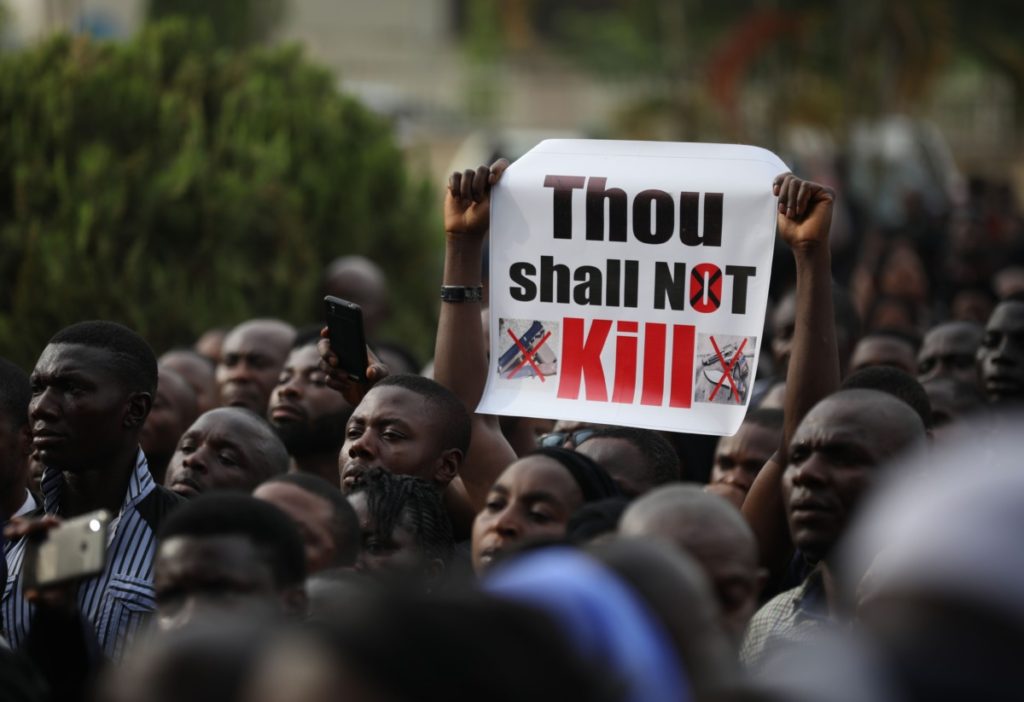 Christian faithful hold signs as they march on the streets of Abuja during a prayer and penance for peace and security in Nigeria in Abuja. The Catholic Bishops of Nigeria asked Christians and other people to pray for security and to denounce the barbaric killings by the Boko Haram insurgents and the incessant cases of kidnapping for ransom in Nigeria. ( KOLA SULAIMON/AFP via Getty Images)

Just days earlier, a 22-year-old Christian university student was beaten, raped, and killed by a blow to the head with a fire extinguisher in a church in Benin City, Nigeria. Uwaila Vera Omozuwa was assaulted by a group of unknown men while she was reading alone in the Redeemed Christian Church of God (RCCG) church.

In her report, Gilbert identifies two factions of Islamist jihadis as the main perpetrators of the ongoing assault on Christians: the Islamic terror group Boko Haram, now partially aligned with the Islamic State West Africa Province (ISWAP), and the Fulani militants, who operate throughout the country.

There is also “mounting evidence” that the Nigerian government under Muhammadu Buhari, who is himself Fulani, is “somehow complicit in the Islamist groups’ assaults,” Gilbert notes.

While no one really knows the precise numbers of Nigeria’s victims “thanks to mass graves, torched villages, chaotic aftermaths, and disappearances,” the magnitude of the problem is “horrifying,” she states.