China, Russia demand that some North Korea sanctions be lifted 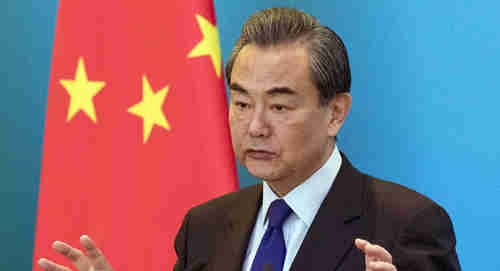 Russia and China are starting to demand that the sanctions on North Korea be reduced.

The objective of North Korea’s dictator Kim Jong-un has been to get the sanctions removed without having to denuclearize. His father was very successful at that, having resumed nuclear development when the sanctions were lifted, based on his promise to end nuclear development. The child dictator wants to prove that he is as good as his father at tricking and humiliating the West.

After they starved and viciously abused their own people for decades, based on a promise to make North Korea a great country, a world peer to the United States, it is my personal opinion that if Kim actually did denuclearize, then he would be shot dead by his own generals.

Since the beginning of the year, Kim has adopted a “charm offensive” strategy, working with the Russians, Chinese, and South Koreans to put international pressure on the U.S. administration to agree to reduce sanctions. He has taken easily reversible “confidence-building steps,” including destroying a nuclear test facility that could easily be rebuilt, and returning the remains of American Korean War soldiers, when he has thousands more. He also suspended open testing for nuclear weapons and ballistic missiles, but he has continued development of these weapons and, even worse, is selling them to other countries.

At the U.N. Security Council meeting on Thursday, America’s secretary of state Mike Pompeo repeated previous criticisms of Russia and China for violating the internationally agreed sanctions on North Korea, and said that the sanctions must be continued to maintain pressure:

It is imperative for members of the United Nations to take that to heart. Enforcement of UN Security Council sanctions must continue vigorously and without fail until we realize the fully, final, verified denuclearization. The members of this council must set the example on that effort, and we must all hold each other accountable.

However, Wang Yi, China’s foreign affairs minister, responded by saying the sanction measures could be “modified”:

A provision in the Security Council resolutions that the council is prepared to modify the sanction measures in light of the DPRK’s [North Korea’s] compliance. Now given the positive developments in the inter-Korean and DPRK- US relations, and the DPRK’s important pledges and actions on denuclearization, China believes that the Security Council needs to consider invoking in due course this provision to encourage the DPRK and other relevant parties to move denuclearization further ahead.

Russia’s foreign minister Sergei Lavrov added to Wang Yi’s remarks by criticizing Western nations for “stubbornly” refusing to agree to reduce sanctions. He said that, “Any negotiation is a two-way street. Steps by the DPRK (North Korea) toward gradual disarmament should be followed by the easing of sanctions,” and that the continued imposition of sanctions must not become “a hindrance” to dialogue between the two Koreas. CBS News and Sputnik News and Guardian (London) and Reuters (17-Sep)

The North Koreans have made some easily reversible “confidence-building” concessions, as described above.

The US has also made an easily reversible concession: The U.S. has suspended all joint military drills with the North Koreans.

Mike Pompeo is supposed to have another meeting with Kim Jong-un in the near future.

The major demand that the U.S. will make is for Kim to provide a list of all nuclear weapon and ballistic missile development sites, and then to allow U.N. IAEA inspectors to visit the sites and verify that denuclearization is in progress. I would be shocked and surprised if Kim agreed to that.

The major demand that the North Koreans will make will be to sign a peace treaty formally ending the 1950s Korean War and then to withdraw thousands of American troops from South Vietnam. I would be shocked and surprised if Trump agreed to that.

However, if both Kim and Trump shock and surprise me, then undoubtedly some agreement would be reached to ease some sanctions.

Trump claims, in the spirit of The Art of the Deal, that he expects North Korea to fully denuclearize by the end of 2019. I would be VERY shocked and surprised if that happened.

This situation has seemed so benign for months that almost nobody has been paying attention, especially with the distraction of people being thrown to the lions in the great Washington Colosseum.

However, my expectations have not changed. At some point, there will be a renewal of the “North Korea” crisis, and the choice will be either war or else allowing North Korea to build an arsenal of nuclear ballistic missiles pointed at the United States. AP and Asia Times