Khadim Hussain Rizvi, the head of the radical Islamist party Tehreek-e-Labbaik Pakistan (TLP), died on Thursday at age 54 after suffering a fever and difficulty breathing.

While no reports have indicated a positive test for Chinese coronavirus, Rizvi (pictured) was at the helm of a movement organizing mass mob protests against France.

TLP’s last major event before Rizvi’s death was a rally against blasphemy on Sunday calling for cutting diplomatic and economic ties with France. The rally attracted at least 5,000 people and turned into a march from Rawalpindi to neighboring Islamabad, prompting police to shut down nearly every major road into the capital. Authorities deployed over 3,000 officers to protect the French embassy and keep the rioters outside of the neighborhood where the embassy is located, prompting violent clashes.

Police managed to convince TLP to end the rally midday Monday, meaning the crowd participated in the mass event for over 24 hours.

Islamists around the world have organized mass protest events – which may trigger the rapid spread of Chinese coronavirus – for over a month following the beheading of French teacher Samuel Paty. Paty, who taught in a Paris suburb, had used cartoons of Muhammad from the satirical French magazine Charlie Hebdo to teach a class on freedom of speech, triggering a grassroots campaign among Muslim parents to punish him that ended with a teen Chechen immigrant beheading him.

French President Emmanuel Macron posthumously awarded Paty the Legion of Honor and has enacted measures to shut down mosques that organize such campaigns, insisting, “we will never give up cartoons.”

Rizvi’s group organized multiple protests against Macron for his stance. TLP is one of Pakistan’s most prominent anti-blasphemy groups and, under Rizvi, also organized mob protests demanding the killing of Asia Bibi, a Christian woman imprisoned for a decade over claims she drank out of a “Muslim cup,” and freedom for Mumtaz Qadri, the Islamist responsible for killing Punjab Governor Salmaan Taseer.

Pakistani Prime Minister Imran Khan, who has vocally advocated for a global law criminalizing speech offensive to Muslims, announced the return of social distancing measures nationwide this week via a “Standard Operating Procedure” (SOP) all businesses must adhere to. While Khan canceled all mass rallies organized by his own political party, he did not ban potential “super-spreader” events like anti-blasphemy mobs or criticize the events, insisting they were a necessary expression on a “sensitive” issue.

Pakistan’s Express Tribune reported that Rizvi was taken to a hospital – he was wheelchair-bound – on Thursday while struggling to breathe. Doctors also recorded that he had a fever before dying. Reports differed on his status on Thursday evening as family members told local media that he appeared to improve in his condition and revived shortly after being pronounced dead, but did not survive much longer after.

“Rizvi had had a high fever for four days and developed serious respiratory problems on Thursday. He was then taken to hospital where he died,” Salman Ahmed, the doctor who tended to him, told the Associated Press.

High fever and difficulty breathing are common symptoms of Chinese coronavirus, which appeared to affect some patients more severely if they suffer from pre-existing conditions. At 54, Rizvi was not automatically at high risk due to age. TLP leaders have not confirmed any positive coronavirus test.

There is no indication that, upon experiencing symptoms consistent with a coronavirus infection, Rizvi quarantined himself. Rizvi reportedly attended the thousands-strong anti-blasphemy protest this weekend while suffering from respiratory symptoms last week, potentially exposing as many as 5,000 people. Prior to his hospitalization, TLP confirmed that he was present at his Islamic school (madrassa). 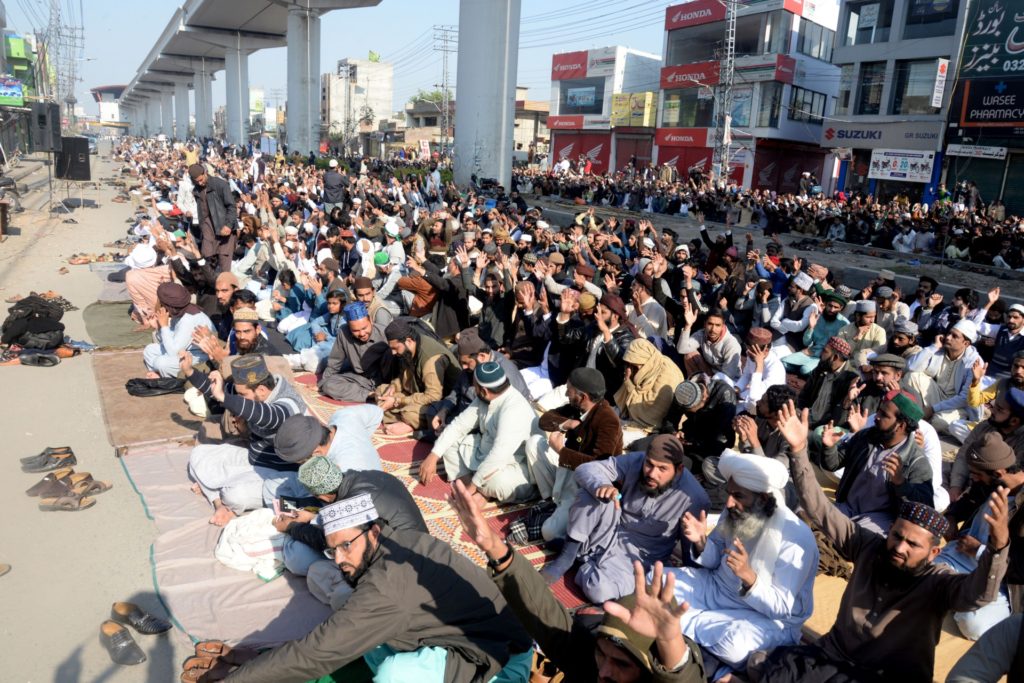 Activists and supporters of Tehreek-e-Labbaik Pakistan (TLP) gather outside the house of Khadim Hussain Rizvi, founder of TLP, a day after his death, in Lahore on November 20, 2020.  – The founder of an influential Pakistani Islamist party created to protest any reforms to the country’s ultra-conservative blasphemy laws died on November 19, days after leading demonstrations against France, an official said. (ARIF ALI/AFP via Getty Images)

“When he came to the protest sit-in, he was not feeling well at that time as well,” Pir Ijaz Ashrafi, a senior TLP leader, told Al Jazeera. “He stayed unwell for a few days after that. We were not able to ascertain what it was.”

“He was feeling a bit better, he was eating as well. But in the evening, he once again deteriorated and we brought him to the hospital [where he was pronounced dead],” he continued.

A slight improvement in conditions before severe symptoms is not uncommon, doctors around the world have told media outlets.

“They say, ‘Hey, you know, I think I’m getting over this,’ and then within 20 to 24 hours, they’ve got fevers, severe fatigue, worsening cough and shortness of breath,” Christopher Ohl, an infectious disease expert in North Carolina, told NBC News in March. “Then they get hospitalized.”

TLP has not indicated that it will enact any social distancing or precautionary measures for Rizvi’s funeral. Al Jazeera stated that the event “is expected to draw crowds of thousands.” The Pakistani newspaper Dawn stated that large crowds had already begun gathering at his home.

Khan’s government has not indicated that it will do anything to prevent mass crowding at the event, though Khan recently urged Pakistanis to “take precautions” given a steep rise in the number of coronavirus cases in the country.

“This is the time to take precautions. If we do, we can slow down the virus. Just like earlier we were saved due to following precautions, that time has come again,” Khan said on Monday. “We have canceled our jalsas [political rallies] and will ask other [parties] to do the same because that is one place where the virus spreads rapidly.”

At least one major opposition party, the recently formed Pakistan Democratic Movement (PDM), declined the request, arguing that Khan was attempting to use the pandemic to silence opposition. While Khan said he would not intervene to stop them, authorities in Peshawar reportedly did refuse to grant permission for a PDM rally on Friday. The PDM attracted 50,000 people to its last rally in October.