Islamabad, the capital of Pakistan, documented its highest Chinese coronavirus positivity rate since March on Tuesday, an exclamation point on a surging wave of cases nationwide that follow weeks of Islamist mob protests against French President Emmanuel Macron for his condemnation of a jihadist beheading.

Islamist Prime Minister Imran Khan, who has also attacked Macron and routinely advocates for a global law against expression that offends Muslims, reimposed a series of social distancing and hygienic measures on Pakistanis known as “standard operating procedures” on Monday to limit the spread of the virus. He did not ban political rallies, but he announced that his party, Pakistan Tehreek-i-Insaf (PTI), would cancel all scheduled rallies in anticipation of the 2023 general elections.

The significant rise in coronavirus cases in the country is occurring alongside similar “second wave” increases in diagnoses nationwide. In Pakistan, however, the rise also follows four weeks of organized mob behavior by Islamist groups demanding a boycott of France and political rallies by the opposition Pakistan Democratic Movement (PDM) that movement leaders insist will not stop on account of the virus. The events have created tightly packed crowds of thousands of people that have spent hours around each other – one such mob this weekend organized on Sunday and refused to dissolve until midday Monday – using no visible protective gear.

Pakistan’s weak healthcare system and limited ability to test also suggest that the number of cases documented is significantly lower than the number that actually exists.

At press time, Pakistan has confirmed a little over 363,000 cases of Chinese coronavirus and 7,230 deaths cumulatively. Islamabad along ha documented 24,444 cases as of Tuesday. According to the Pakistani newspaper Dawn, the city is currently monitoring 3,473 active Chinese coronavirus cases and hospitals treating 117 of these people.

“The daily positivity rate of Covid-19 [Chinese coronavirus] cases in the capital reached 11.78pc on Tuesday, the highest since the outbreak of the virus in March, officials of the district administration told Dawn,” the newspaper reported. The news has prompted the shutdown of several private institutions; Khan has not ordered the shutdown of public schools but hinted at extending scheduled winter vacations in the event that case numbers continued to rise.

Khan announced the implementation of restrictions this week to reverse the trending increase in cases, including the cancelation of PTI rallies. Khan also reduced the number of people allowed to attend a wedding to 300, banned indoor weddings, and imposed the “SOPs” on businesses once again, which were previously free to operate without limitations.

“This is the time to take precautions. If we do, we can slow down the virus. Just like earlier we were saved due to following precautions, that time has come again,” Khan urged, saying that Pakistan had documented smaller numbers of cases than its neighbors during the initial outbreak of the pandemic because its people “were specially blessed by Allah.” 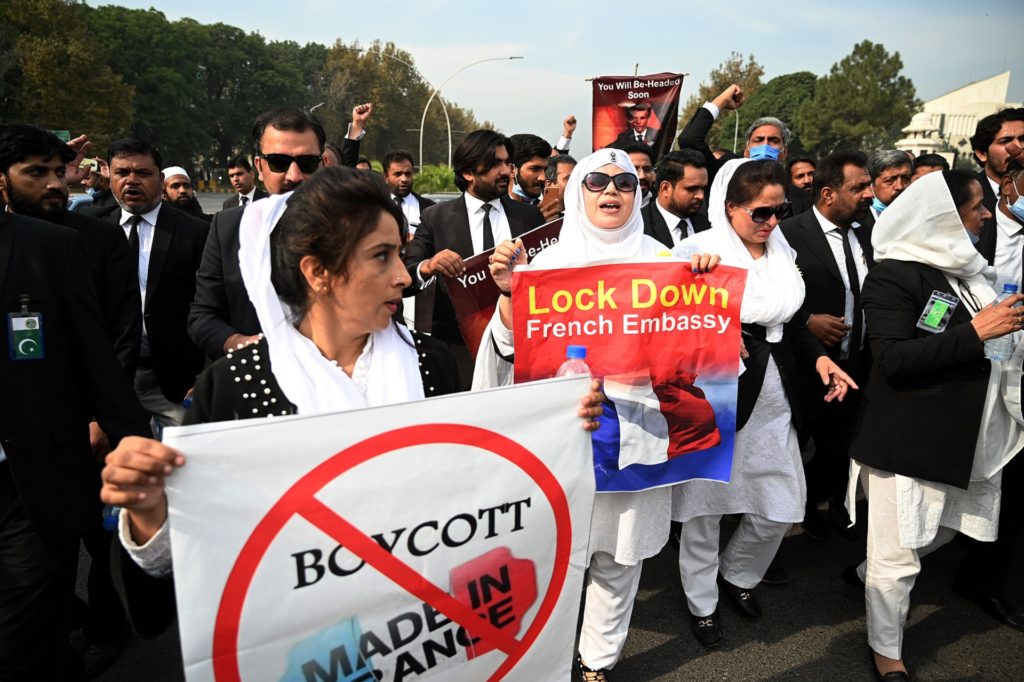 Lawyers display placards as they march along a street during an anti-France demonstration near the French Embassy in Islamabad on November 12, 2020. (AAMIR QURESHI/AFP via Getty Images)

“We are a very lucky nation; look at Iran and India. We managed to avoid the destruction that coronavirus caused in other countries,” Khan said. “But sadly we have seen that our cases have risen by four times in the past two weeks. The 6-7 deaths that we were having per day have climbed to 25.”

“We have canceled our jalsas [political rallies] and will ask other [parties] to do the same because that is one place where the virus spreads rapidly,” he suggested.

Khan made the announcement on Monday, the same day his government struggled to negotiate with the Islamist organization Tehreek-e-Labbaik Pakistan (TLP) to end a rally that it had organized on Sunday to protest the French government’s rejection of jihadist terrorism. The rally attracted a crowd of 5,000 men in Rawalpindi, which neighbors Islamabad, but by sundown the rally had become an attempted march into Islamabad.

Government officials deployed over 3,000 police officers and used large shipping containers to block most of the roads leading into the capital and to seal off the neighborhood housing the French Embassy. Police arrested over 100 people, cut internet and cell phone service in the capital, and used tear gas to subdue the crowd before successfully negotiating an end to the event.

Minister for Religious Affairs Pir Noorul Haq Qadri announced an end to the TLP rally on Monday after hours of negotiating with its leadership. TLP published what it claimed to be an agreement it achieved with the government that would result in the release of all TLP-affiliated prisoners and no charges filed for anyone arrested during the violence the mob caused this weekend.

“The agreement says the government will take a decision from the Parliament regarding expulsion of the French ambassador within three months, will not appoint its ambassador to France and release all the arrested workers of the TLP,” Dawn reported on Tuesday, noting Khan’s government had not confirmed the contents of the document TLP published.

Asked about the rally on Tuesday, Information Minister Shibli Faraz reportedly said that those remaining in Islamabad independently after most of the mob had dispersed did not have to fear a forceful removal. He also emphasized that Khan had not implemented a ban on political gatherings, though he highly recommended it.

Sunday’s event was the latest in a series of crowded disturbances in the country condemning France. The incidents are a response to the beheading of a French schoolteacher, Samuel Paty, on October 16. Paty had used cartoons of Muhammad from the satirical magazine Charlie Hebdo in a class on free speech, triggering a campaign at a local mosque to punish him that concluded with a teen Chechen terrorist beheading him. Macron posthumously awarded Paty the Legion of Honor and declared at a memorial service for him, “we will ever give up cartoons.”

“Sadly, President Macron has chosen to deliberately provoke Muslims, including his own citizens, and encouraged the display of blasphemous cartoons targeting Islam and our Prophet [Muhammad],” Khan said in response to the incidents. Khan later called “freedom of expression,” when it results in what he considers to be blasphemy, “intolerable.”

Pakistan attracted multiple protests in October in which mobs of Islamists attempted to storm the French Embassy in Islamabad, resulting in violent exchanges with police. The mobs also burned French flags and hurled stones at police. At least one school beheaded Macron in effigy in front of students.

Pakistan has also had to contend with Khan’s political opposition staging crowded rallies. A PDM rally in October packed 50,000 people into a stadium to hear the leaders of multiple opposition parties decry Khan’s rule. The group has three more scheduled in the next month.