Legendary boxer and Philippine Senator Manny Pacquiao announced Sunday he will seek the Philippine presidency in May 2022, the Manila Bulletin reported.

A pro-Pacquiao faction of the Philippines’ ruling political party, PDP-Laban, officially endorsed the boxer-turned-senator as president for the 2022 general election on September 19 during the party’s 11th National Assembly.

“Yes, I accept,” Pacquiao said in response to the nomination, confirming his candidacy.

“I am a fighter, and I will always be a fighter inside and outside the ring,” Pacquiao, 42, said in further remarks during a live-streamed speech at the assembly. “I am accepting your nomination as candidate for president of the Republic of the Philippines.”

“In the name of our fellow countrymen long asking for the right change in governance and true service to the Filipino people, I wholeheartedly, bravely, and humbly hope for your support,” he added.

I boldly accept the challenge of running as PRESIDENT of the Philippines. We need progress. We need to win against poverty. We need government to serve our people with integrity, compassion and transparency. The time is now. I am ready to rise to the challenge of leadership. 🇵 pic.twitter.com/suN1zFTxyW

I boldly accept the challenge of running as PRESIDENT of the Philippines. We need progress. We need to win against poverty. We need government to serve our people with integrity, compassion and transparency. The time is now. I am ready to rise to the challenge of leadership.

Pacquiao’s confirmation Sunday that he will seek the Philippines’ highest political office next spring ends months of intense speculation that he would run for president in 2022. The pugilist — considered one of the greatest boxers of all time — has transitioned into a career of public service over the past decade, often juggling his fighting commitments with congressional and now senatorial duties. Pacquiao was elected to the Philippine Congress in May 2010 representing Sarangani Province. He served two terms in Congress before graduating to a higher political office when he was elected to the Philippine Senate in 2016.

Pacquiao was a staunch ally of current Philippine President Rodrigo Duterte until recently. The senator openly criticized Duterte’s weak response to China’s latest violation of Philippine maritime territory in the South China Sea in May, sparking a public falling out between the two politicians. Pacquiao’s assessment irked Duterte, who in turn lashed out at the legislator in comments to the press, belittling his knowledge of international relations. 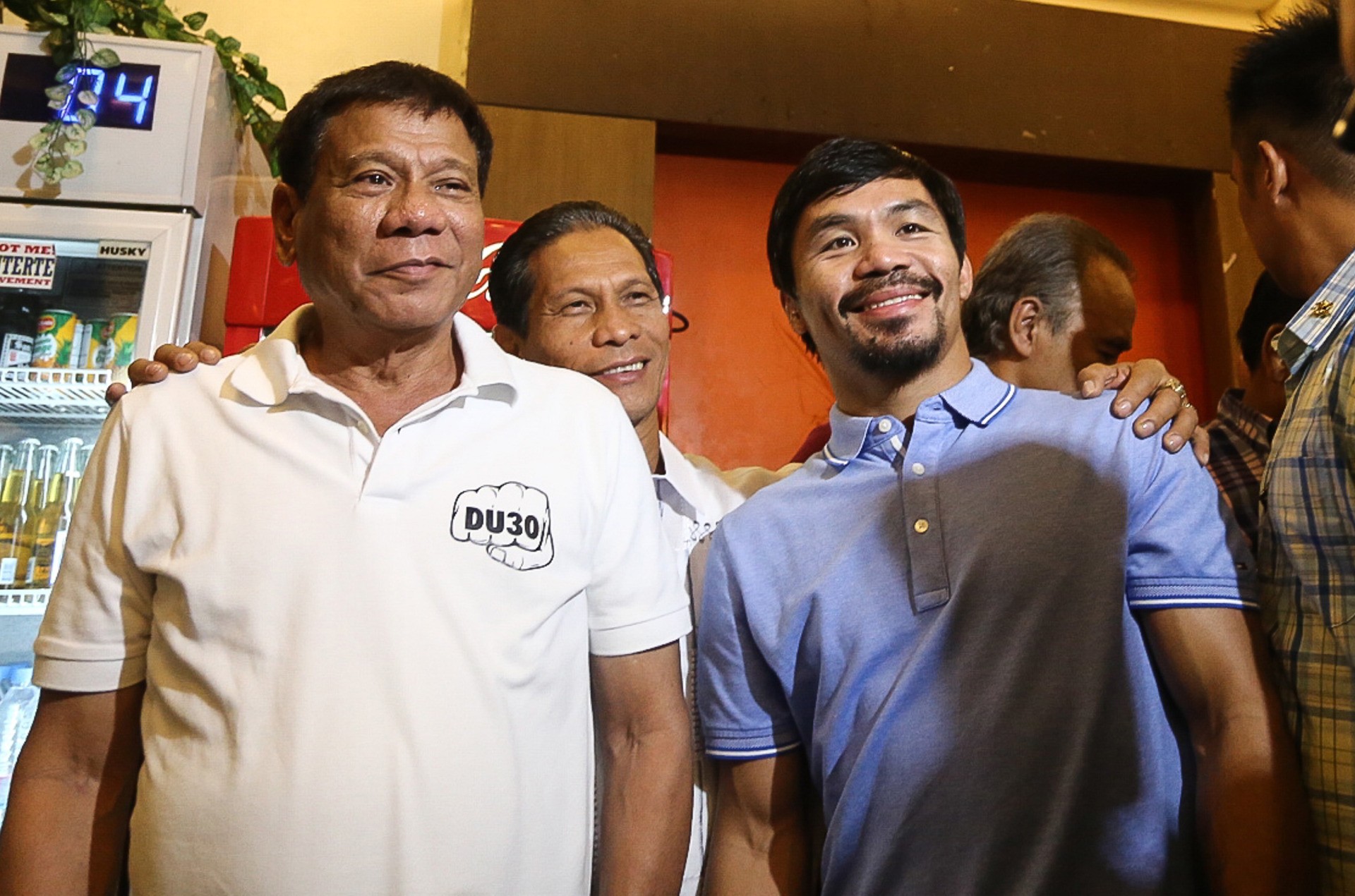 Philippines’ President-elect Rodrigo Duterte (L) stands beside boxing icon and newly elected Senator Manny Pacquiao (R) at a meeting in Davao in southern island of Mindanao on May 28, 2017. (MANMAN DEJETO/AFP via Getty Images).

A December 2020 interview in which Pacquiao suggested Duterte’s administration was guilty of graft resurfaced during this tumultuous period, with the president daring the senator to specifically name allegedly corrupt Philippine government agencies. Pacquiao responded on June 20 by accusing the Philippine Department of Health (DOH) of graft under its current secretary, Francisco Duque III. Duterte appointed Duque to the DOH post in 2017.

Duterte currently serves as the chairman of PDP-Laban. His own faction of the Philippine ruling party voted Pacquiao out of PDP-Laban on July 17 while the still-active boxer was away in the U.S. training for his latest fight on August 21. Pacquiao’s PDP-Laban faction fought the attempted ouster on his behalf, however, successfully denying the action. Duterte’s PDP-Laban loyalists have since endorsed him as their official candidate for the Philippine Vice Presidency in 2022, a nomination which Duterte has officially accepted. Duterte is unable to seek a second term as president of the Philippines in 2022 after his first term expires, according to limits laid out by the country’s constitution.