Corporate sports media, the National Basketball Association (NBA), and the targets of Kanter’s message all seem to agree, Kanter has received no response and little coverage as of Friday.

Kanter launched a campaign against the Chinese Communist Party last week, publishing a video on social media supporting an end to China’s colonization of Tibet and denouncing Xi Jinping as a “brutal dictator.” He followed up that call with a video raising awareness for China’s genocide of the Uyghur people and other Muslims in East Turkistan, another colonized region in western China, and has since condemned Nike for its use of Uyghur and other Chinese slave labor.

Among those Kanter has personally addressed in his videos are several leaders of Muslim nations – including Saudi King Salman and Iranian President Ebrahim Raisi – whose faith he challenged for failing to speak up for Muslims oppressed by China; fellow players Michael Jordan and LeBron James, who he invited to tour Chinese concentration camps with him; Nike head Phil Knight, who received the same invitation; and fellow Muslim athletes Mohamed Salah, Kareem Abdul Jabbar, and Amir Khan.

In addition to his advocacy online, Kanter has been wearing a series of pro-freedom sneakers on the court during Boston Celtics games, all designed by dissident Australian-Chinese artist Badiucao. One pair of shoes featured an image of Uyghur concentration camp victims. Another featured Kanter holding the severed head of Winnie the Pooh, who Chinese dissidents have adopted as a proxy for Xi Jinping after Xi banned the cartoon bear from the country – in response to dissidents comparing his ample belly to Pooh’s.

China is one of the NBA’s most profitable markets. As of 2019, journalists estimated that China makes up between ten and 20 percent of the NBA’s profits; the NBA China subsidiary was estimated to be worth $5 billion. High-profile NBA stars make millions through sponsorship deals with Chinese companies. Those who sign contracts with American companies, like Nike, find themselves also beholden through China because so many of these companies exploit slave labor there, according to extensive reporting by human rights advocates (many such companies ardently deny the accusations). Nike is among those companies, simultaneously denying its use of slave labor while lobbying Congress not to act against the practice.

Thus Kanter, already a walking international incident due to years of denouncing human rights abuses by Turkish Islamist leader Recep Tayyip Erdogan, has directly threatened the bottom line of his entire industry. He is not the first – the 2019 Daryl Morey incident, in which the then-general manager of the Houston Rockets posted a bland statement of support for Hong Kong freedom fighters on Twitter, where people in China couldn’t legally see it, cost the NBA “hundreds of millions” of dollars, according to Commissioner Adam Silver. The Morey incident triggered a months-long news cycle, prompted widespread popular support for the anti-China cause, aroused consternation from those with big paychecks from China (LeBron James prominently so), and booted the NBA from Chinese television, relegated to the Beijing-controlled TenCent streaming service.

TenCent removed the Boston Celtics from its streaming schedule after Kanter posted his first anti-communist video, abruptly disconnecting Chinese viewers from a live Celtics game immediately after the video dropped. The Celtics now enjoy a place on the same blacklist as the Philadelphia 76ers, whose crime was to hire Morey away from the Rockets a year after his Hong Kong tweet. Morey has not made any political statements about China since the incident, but the Communist Party appears insistent on showing the world it never forgets.

Beyond this response, the Chinese Foreign Ministry urged the world to ignore Kanter.

“The player you mentioned was clout-chasing, trying to get attention with Tibet-related issues. His wrong remarks are not worth refuting,” spokesman Wang Wenbin told reporters.

The typically belligerent Global Times government propaganda newspaper and its zealous communist editor Hu Xijin have abstained from commenting on the incident, a stark contrast from its deluge of seething editorials in the aftermath of the Morey incident. Kanter has also failed to make meaningful appearances at China Daily, the People’s Daily, and the Xinhua News Agency, all government outlets with English-language pages. 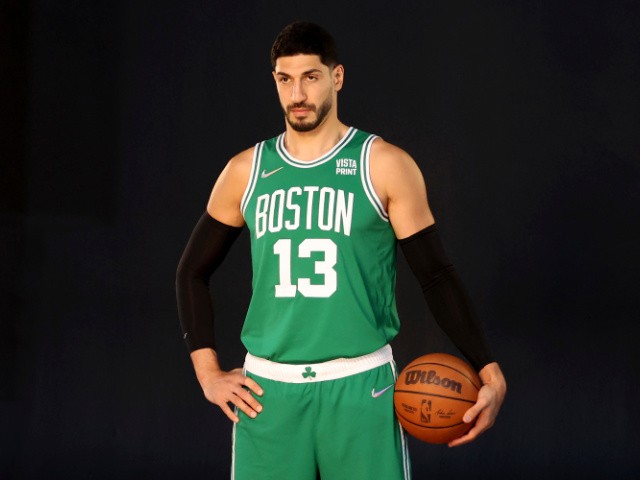 Also silent have been the others Kanter addressed in his video condemning the Uyghur genocide. The governments of Saudi Arabia, the United Arab Emirates (UAE), Pakistan, and Iran have all remained silent despite Kanter’s assertion that their leaders are only Muslims “for show” and their ties to China are “shameful and sad.” Khan, Salah, and Abdul-Jabbar have not responded at press time to Kanter’s request for them to speak up against the genocide of Muslims. Nike has issued no statements. LeBron James, who condemned Morey for publishing the statement “fight for freedom, stand with Hong Kong,” had more time this week to start a feud with the creator of Squid Game than to condemn concentration camps.

Kanter has also inspired surprisingly little coverage at ESPN. The Disney-owned network, whose talent is often eager to wade into political issues, has kept its coverage of Kanter to a bare minimum.

And then there is the NBA. The league itself, while supportive of Kanter in the past, has not weighed in on his latest comments. Fellow players have expressed no solidarity towards him. Boston Celtics president of basketball operations Brad Stevens offered the most vocal support of Kanter’s cause of anyone at the player’s employer – “we’re always going to support any of our players and their right to freedom of speech and expression” – but Celtics coach Ime Udoka, who succeeded Stevens in the role, has said neither he nor any players have discussed the cause as a team. Udoka has notably kept Kanter on the bench for the overwhelming majority of the early season; Kanter has made 2 points since the season began.

The collective lack of reaction to the single loudest condemning of the world’s biggest and most violent rogue state in the American athletic world gives the appearance of a concerted attempt to kill the story. China, at least, appears to have learned a lesson from the fact that its hysterics in response to the Morey tweet resulted in widespread awareness of its human rights atrocities among apolitical NBA fans: attention draws attention. If none of the major players in the story react to the story, they might just fail to feed the news cycle and starve it out of viability.

Kanter’s fans appear to be standing in the way of that strategy. On Thursday, Kanter published photos of the crowd at his latest game, large groups of whom showed up with the flags of Tibet and East Turkistan and holding up signs thanking him for his advocacy.

Change is coming and no one can stop it.

“Change is coming and no one can stop it,” Kanter wrote, debuting a new cause suggesting the silence won’t silence him: “stand with Taiwan.”