India’s government announced Friday it would repeal three “farmers laws” passed last year to reform the country’s agricultural sector after they prompted a year of protests and unrest, the Press Trust of India (PTI) reported.

“We have decided to repeal all three farm laws. We will start the constitutional process to repeal all the three laws in the parliament session that starts at the end of this month,” Indian Prime Minister Narendra Modi said in a speech on November 19.

India’s parliament passed the three laws in September 2020 “in a bid to overhaul India’s archaic agriculture sector,” the Guardian recalled on Friday, noting the sector remains “riddled with issues of poverty, debt, and inefficiency” despite employing roughly 60 percent of India’s workforce.

The legislation in question aimed to deregulate India’s agriculture sector. This would have allowed farmers to sell their produce to buyers outside of government-regulated wholesale markets, where a minimum price guarantee is assured. Indian farmers opposed to the laws argued the reforms threatened to undermine the prices of their produce.

Farmers from India’s Sikh-dominated state of Punjab led protests against the legislation starting in September 2020. Sikhs, who constitute a sizeable religious minority in India, wielded their tremendous lobbying powers to fuel global support for the protests. The demonstrations converged on the outskirts of Delhi, India’s National Capital Territory (NCT), last autumn and have lasted through the present day following a violent crescendo in January.

“I appeal to all the farmers who are part of the protest … to now return to your home, to your loved ones, to your farms, and family. Let’s make a fresh start and move forward,” Indian Prime Minister Narendra Modi said during his speech on Friday, acknowledging the continued presence of “protest camps” in and around Delhi. 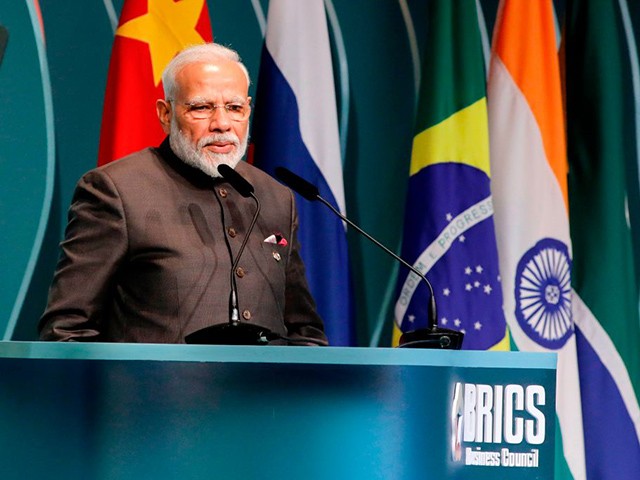 India’s Prime Minister Narendra Modi speaks during the BRICS Business Council prior to the 11th edition of the BRICS Summit, in Brasilia, on November 13, 2019. (Sergio Lima/AFP via Getty Images)

At the height of the anti-farmer law protests, tens of thousands of demonstrators descended upon India’s national capital. At least one farmer died in Delhi in January during a violent day of protest after his own tractor turned over, and he was subsequently crushed by the machine. The man was one of thousands of demonstrators who crossed into central Delhi on January 26 — most on foot, but some on tractors, motorcycles, horses, and even cranes — to protest the farmer laws. The demonstration strayed from a pre-approved marching route and provoked chaos after some participants lashed out at local police officers, who were vastly outnumbered by the mob. The protest quickly descended into a riot, with a number of farmers storming Delhi’s historic Red Fort.