As the year comes to a close, the Chinese government, broadcaster NBC, and the International Olympic Committee (IOC) have begun ramping up promotion for the upcoming Beijing Winter Olympics – held under a regime currently committing genocide and actively persecuting athletes and journalists.

For over a year, human rights organizations and the victims of the Chinese Communist Party have urged the world not to honor China’s abusive behavior and instead consider boycotting the event. Not a single country has done so at press time, leading to gloating statements in Chinese government propaganda outlets about how participating in what activists have dubbed the “Genocide Olympics” is now the “mainstream” position of the world.

With about a month to go before the Games, here are seven reasons – some obvious to even casual news followers, some less so – the IOC should consider shutting the whole thing down.

China Is Committing One of History’s Largest Genocides – Right Now!

The most often cited reason to boycott, relocate, or cancel the Games is also the most gruesome: the dictatorship of Xi Jinping is currently engaging in a campaign to erase several ethnic minorities in western China, most prominently the Muslim-majority Uyghur people. Boycotts to oppose human rights abuses have a long history and, in the Olympics, the closest analog is the 1936 Berlin Summer Olympics, hosted by Nazi Germany. Like the Beijing Olympics, calls for boycotting the Nazi Olympics largely failed. 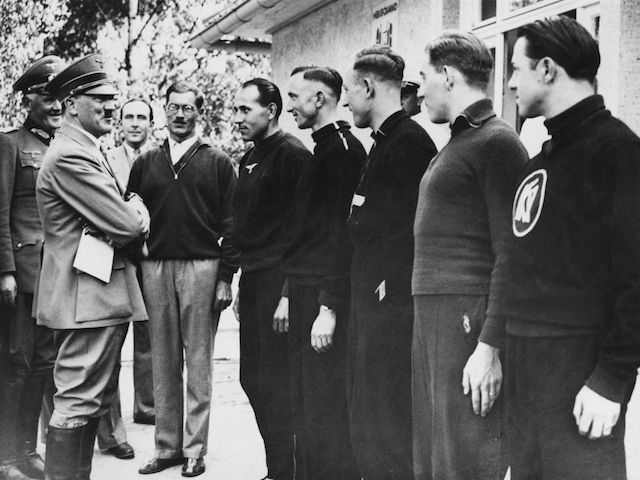 Adolf Hitler (1889 – 1945) meets a group of sprinters at the Olympic Village during the Berlin Olympics, Germany, 1936. (Photo by Fox Photos/Hulton Archive/Getty Images)

The Communist Party genocide plan includes the use of hundreds of concentration camps to trap, indoctrinate, sterilize, torture, rape, enslave, and kill Uyghurs, as well as other Muslims belonging to Kazakh and Kyrgyz populations. The administrations of both Presidents Donald Trump and Joe Biden agreed to formally identify the elimination of the native people of East Turkistan a genocide, one of the few things the governments have agreed on.

In early December, the Uyghur Tribunal, an independent institution established to explore genocide claims against China, concluded that China was committing genocide beyond a reasonable doubt. Among the verified abuses the Tribunal documented were: “pulling off fingernails; beating with sticks; detaining in ‘tiger chairs’ where feet and hands were locked in position for hours or days without break; confined in containers up to the neck in cold water; and detained in cages so small that standing or lying was impossible.”

“Women detainees have had their vaginas and rectums penetrated by electric shock rods and iron bars. Women were raped by men paying to be allowed into the detention centre for the purpose,” the Tribunal ruling read. “One young woman of twenty or twenty-one was gang raped by policemen in front of an audience of a hundred people all forced to watch.”

No Safety Guarantees for Taiwanese Participants

China refuses to acknowledge that the nation of Taiwan is sovereign, claiming it instead, falsely, as a rogue province. But Taiwan is an IOC member and its athletes compete in the Olympics as part of a team that, thanks to Chinese bullying, is known as “Chinese Taipei.”

Like every other country on earth, Taiwan has publicly stated it would not consider boycotting the Olympics. There is no guarantee, however, that its athletes or officials attending would not be arrested, as China considers individuals who acknowledge Taiwan’s nationhood dangerous “secessionists” and routinely threatens violence against them. Taiwanese officials have stated that they would consider a “diplomatic” boycott – not sending politicians to the event, which would not be a boycott as politicians do not play in the Olympics – but have not answered how sending their officials at all would not endanger them given China’s belligerence towards Taiwan’s government.

“Anyone who attempts to split any region from China will perish, with their bodies smashed and bones ground to powder,” dictator Xi Jinping declared in 2019.

“The curtain of preparations for a comprehensive military struggle by the Chinese mainland has obviously been drawn open,” the Chinese government propaganda outlet Global Times declared in October. “Now, we will like to warn the DPP authorities and their supporters: do not continue to play with fire. They should see that the Chinese mainland’s preparation to use force against Taiwan secessionist forces is much stronger than ever before.”

No Safety Guarantees for Journalists
Neither the IOC nor NBC, which has broadcast rights for the Olympics in America, have properly explained how journalists in Beijing to cover the Olympics will be safe from persecution. China is the world’s worst jailer of journalists according to the Committee to Protect Journalists (CPJ), an international NGO.

In a report published this month, Reporters Without Borders accused China of an “unprecedented campaign of repression … against journalism and the right to information worldwide,” explicitly including foreign journalists, not just Chinese citizens. Among the biggest concerns the report highlighted is forced indoctrination under “Xi Jinping Thought” to receive press cards and the blacklisting of foreign journalists who dare question any regime policy.

The Olympics necessitate a large influx of foreign journalists into the country. Why endanger them by sending them to the world’s biggest repressor of journalism?

China Abuses and Represses Athletes
The 2022 Beijing Olympics will occur under the shadow of one of the most egregious abuses of a high-profile athlete ongoing today: the bizarre story of Peng Shuai, a Chinese tennis champion with multiple Wimbledon doubles trophies to her name who accused the head of China’s Olympic Committee of raping her.

Peng wrote a long post on Weibo, a Chinese government-controlled social media outlet accusing high-ranking Chinese Communist Party official Zhang Gaoli of forcing her to have sex with him. The post rapidly disappeared from the site. Peng followed, vanishing from the public eye until Chinese state propaganda outlets began publishing alleged communications with her in which she denied making the accusations and claimed reporters documenting the story were doing her a disservice. The Global Times went as far as to claim that fellow tennis players elevating her story, and not the regime keeping her quiet, were violating her right to free speech.

Some have argued that the Uyghur genocide and other human rights atrocities China is conducting have nothing to do with the Olympics. It is hard to do the same about the abuse and persecution of an actual Olympian.

China has faced criticism and suspicions of cheating in multiple Olympic Games. China’s gymnasts, for example, have faced scrutiny for looking questionably young during multiple tournaments; the IOC verified in 2010 that China sent ineligible children to compete in the 2000 Sydney Summer Olympics. The report came out two years after widespread accusations, supported by some evidence the IOC did not appear to consider, that Beijing did the same thing in the 2008 Olympics it hosted. 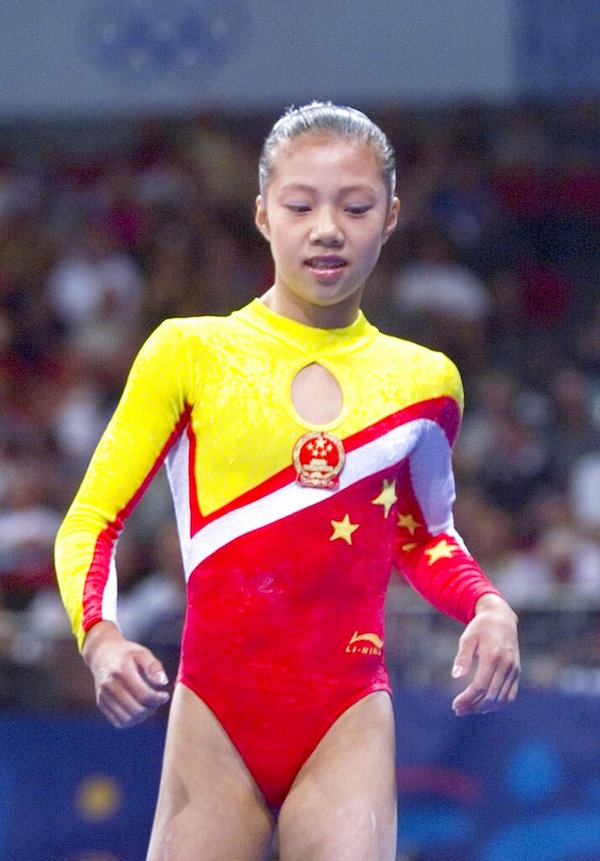 Chinese gymnast Dong Fangxiao comes off the mats following a vault during the women’s gymnastic vault finals at the 2000 Summer Olympic Games in Sydney. China was stripped of a bronze medal from the 2000 Sydney Olympics on Wednesday, April 28, 2010, for fielding an underage female gymnast, with the women’s team medal now going to the United States. The International Olympic Committee acted after investigations by the sport’s governing body determined that Dong Fangxiao was only 14 at the 2000 Games. Gymnasts must turn 16 during the Olympic year to be eligible. (AP Photo/Amy Sancetta, File)

The gymnastics scandals were isolated cases separate from the revelation by former Olympics doctor Xue Yinxian in 2017 that as many as 10,000 people were involved in a years-long doping conspiracy in the communist country.

“There must have been more than 10,000 people involved,” Germany’s Deutsche Welle quoted Xue as telling the German broadcaster ARD. “All international medals (won by Chinese athletes in that time) should be taken back.”

China Is Terrible at Hockey, Arguably the World’s Most Popular Winter Sport

Despite all that alleged cheating, China barely managed to get its men’s ice hockey team into the Olympic Games it itself is hosting.

“The International Ice Hockey Federation confirmed China’s participation Tuesday, avoiding what would have been an unprecedented removal of a host country’s team for performance reasons,” the Associated Press confirmed in early December. China barely eked it out by flooding the team with foreigners – mostly Canadians – as its attempts to develop what the AP called a “homegrown” decent hockey team failed.

Given that China has risen to become one of the most competitive countries against the United States on the world stage for medals in the Summer Olympics, enthusiasts may make an argument that Beijing hosting that tournament made some sense. A similar argument for the Winter Olympics is barely tenable. 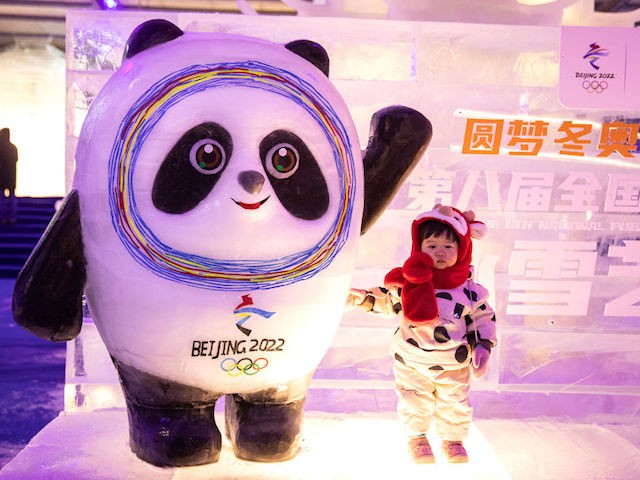 China’s state-run Global Times warned in November, citing meteorologists, that international athletes may have the “coldest winter ever” in Beijing, a barrage of “extreme weather” that could endanger those competing outside. The Times citing Communist Party officials insisting they were ready for any potential weather condition, but Beijing’s notoriously cold and long winters – Beijing issued its first major snowstorm alert last month – make it a questionable, at best, venue for a guaranteed safe athletic experience.

The Chinese coronavirus that has fueled an ongoing pandemic originated in China and continues to wreak havoc there, largely the result of poor management on the part of the Communist Party. Uncontrolled coronavirus spread resulted in authorities canceling the Beijing Marathon in October; officials are now demanding that locals not travel outside of their home regions for the Lunar New Year holiday in much of the country. Beijing has banned Communist Party officials from leaving to avoid the poor optics of government officials fleeing a coronavirus hotspot as the Winter Games begin. China simultaneously claims it has never lost control of the Chinese coronavirus situation in the country while admitting to alleged “loopholes” that have allowed the virus to spread uncontrollably – raising suspicions that sending athletes into the country may needlessly expose them to coronavirus infections in a country whose catastrophic failure at containing the virus led to every other outbreak in the world. 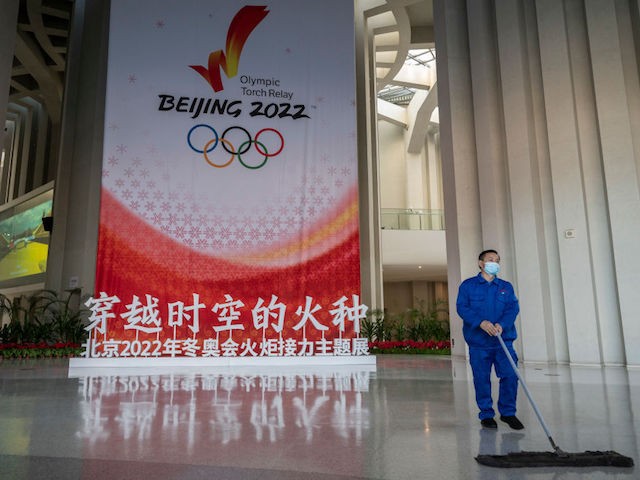 A worker sweeps near a display of the Olympic Flame for the Beijing 2022 Winter Olympics at the Olympic Tower on December 19, 2021 in Beijing, China. (Kevin Frayer/Getty Images)