China’s state-run Global Times admitted on Wednesday that “loopholes in port management” contributed to the country’s latest coronavirus outbreak in the China-Russia border city of Manzhouli this week.

“Epidemiologists and insiders warned that loopholes in port management challenge China’s dynamic zero-COVID policy,” the newspaper wrote on December 1 while reporting on a rising number of new “Covid-19,” or Chinese coronavirus, cases in Manzhouli.

The city has a population of roughly 350,000 and is strategically located along China’s border with Russia, specifically in China’s Inner Mongolia Autonomous Region. Manzhouli recorded 142 new coronavirus cases as of December 1. The Global Times, a newspaper run by China’s ruling Communist Party, was quick to shirk responsibility for Manzhouli’s infections on Wednesday, alleging all 142 were “caused by contaminated imported goods.”

“It is not the first time this land port city has had to confront coronavirus flare-ups caused by imported cases,” the Global Times noted.

“Manzhouli port found imported cases from Russia in April 2020 and then fought a domestic outbreak in late November 2020 due to imported virus,” the publication recalled. 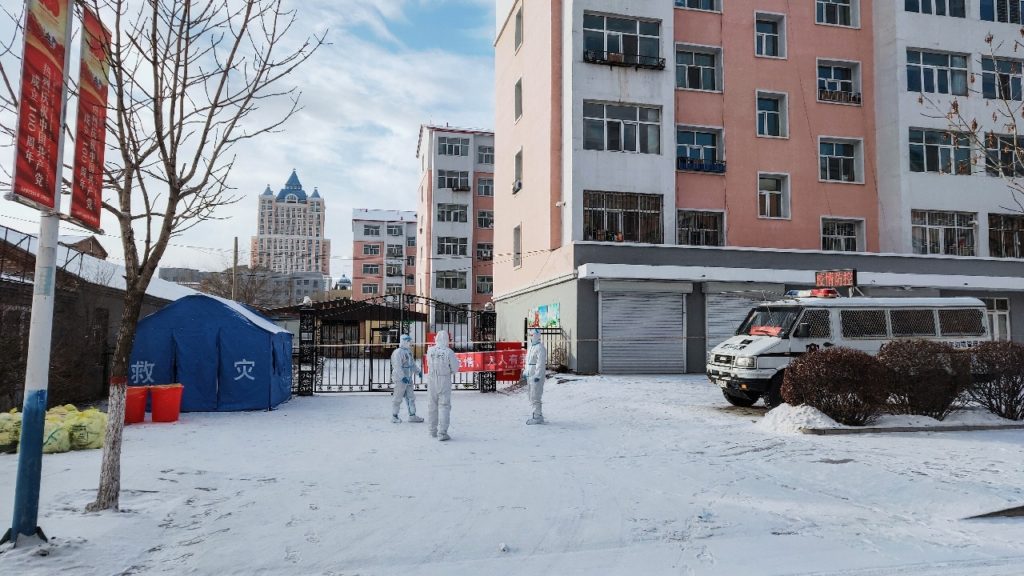 This photo taken on November 30, 2021 shows health workers (C) in personal protective equipment (PPE) standing guard outside a residential area which is restricted due to the spread of Covid-19 in Manzhouli in China’s northern Inner Mongolia region. (Photo by CNS / AFP)

China’s coronavirus caseload has surged since October 17, when a single outbreak linked to the Inner Mongolian town of Ejin Banner allegedly launched an epidemic that subsequently spread nationwide, according to the Chinese Communist Party (CCP)’s official account. Ejin Banner, like Manzhouli, is a Chinese land port city that borders Mongolia. Communist officials said a tour group from Shanghai traveled to China’s Inner Mongolia Autonomous Region in early October. Some of the group’s members allegedly contracted coronavirus from an unspecified “foreign source” while visiting Ejin Banner, thus triggering a local outbreak of the disease that quickly leapt across provincial Chinese borders. The epidemic has affected at least 20 Chinese provinces and regions since mid-October.

The Global Times continued to push this unproven narrative on December 1, claiming, “Ejin Banner was hit by an imported source in mid-October [sic].” The newspaper tied the alleged incident to its earlier acknowledgment of China’s poor port management.

“Although the source remains unclear then, epidemiologists close to the National Health Commission believe the virus was likely imported through ports from Mongolia, highlighting the challenges that Chinese ports are facing as the global epidemic has yet to be tamed [sic],” the Global Times opined.

In Heihe, another China-Russia border city, local CCP officials also blamed imported coronavirus infections from Russia on a local outbreak of the disease in early November.

“According to state media, officials have urged people in the border city to immediately report any instances of illegal hunting, animal smuggling, or people crossing the border to fish,” the Guardian reported on November 9. “It also warned of severe penalties for people who intentionally conceal relevant information.”