As the world prepares for the departure of an especially tumultuous year in global politics, some of the world’s most influential countries are preparing for elections that may dramatically shift domestic politics and foreign policy, depending on how voters swing.

Presidential elections often result in dramatic changes in the countries holding them, even when allies of the incumbent take over or the incumbent is reelected in countries whose constitutions allow for it. This year, however, a combination of local issues and the ongoing political fallout from the handling of the Chinese coronavirus pandemic have given rise to candidates vowing dramatic changes in the status quo. Below, five countries electing a president in 2022, their first chances to replace their heads of state since the pandemic began. 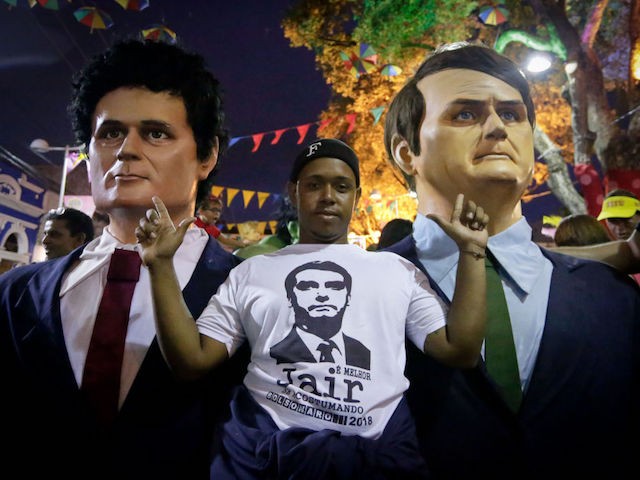 A man poses next to giant puppets representing Brazilian President Jair Bolsonaro (R) and Justice Minister Sergio Moro during a traditional carnival parade through the streets of Recife in northeastern Brazil on February 25, 2020. (LEO MALAFAIA/AFP via Getty Images)

South America’s two most populous countries are facing elections in the coming year and in both, voters will evaluate the record of incumbent conservative presidents. Brazil’s President Jair Bolsonaro won his position in a dramatic election that required him to continue campaigning after being almost stabbed to death on video during a campaign stop by a socialist, who later told police God had commanded him to kill the candidate. Bolsonaro won the presidency with a campaign vowing to eradicate corruption, uphold Christian values, and eradicate the far-left Workers’ Party (PT), whose two presidents had ended their runs in disgrace: one in prison and one impeached.

Many observers at the time attributed Bolsonaro’s win partly to the fact that the jailed president, Luiz Inácio Lula da Silva, could not make a bid to return to power thanks to Brazil’s “clean slate” law, which keeps politicians off the ballot if they are convicted of corruption crimes. Lula was convicted of using millions in illicit funds to, among other things, purchase a luxury beachfront property. His arrest was part of “Operation Car Wash,” a sprawling corruption probe that found Lula’s administration had facilitated the use of government contracts for infrastructure projects to loot public coffers. The government would grant a contract to a company – often the disgraced contractor Odebrecht, behind similar corruption schemes throughout the continent – at an inflated price, then the company would kick back to politicians the extra money they did not need to complete the project.

By the end of 2021, much of the anger over the Operation Car Wash scandal had subsided, in part because Judge Sergio Moro, who presided over the investigation, had imprisoned dozens of politicians over the matter. Moro remains a popular figure, but has since accused Bolsonaro of failing to empower him to fight corruption during his short stint as Justice Minister, tarnishing Bolsonaro. What’s more, the Supreme Court – packed with Lula appointees – overturned Lula’s conviction in March, making the far-leftist an automatic frontrunner in 2022.

Complicating matters is the Chinese coronavirus pandemic. Bolsonaro has steadfastly rejected lockdowns and vaccine mandates, a popular position, but has vacillated on his opposition to questionable Chinese-made vaccines and constitutionally has little power to stop leftist governors from implementing lockdowns in their states. Prior to Lula’s restored ability to run, political observers considered the governor of Sao Paulo, Joao Doria, a prime candidate to challenge Bolsonaro. Doria supports vaccine mandates and implemented sweeping lockdowns, making him popular with the international left.

Doria’s Brazilian Social Democracy Party (PSDB) has already chosen him as their presidential candidate. It remains to be seen if Lula officially runs, splitting the leftist vote and boosting Bolsonaro. Also possible: a Moro 2022 run, which would attract votes from nearly every part of the political spectrum, but possibly not enough to actually win. 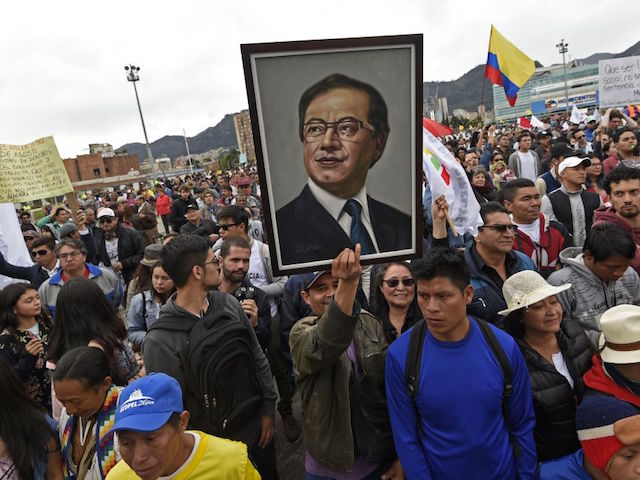 A man holds a picture of former presidential candidate Gustavo Petro as he demonstrates against Colombia’s President-elect Ivan Duque on the day of his inauguration, in Bogota, on August 7, 2018. (JUAN BARRETO/AFP via Getty Images)

Colombia’s presidential election will feature as many familiar faces as Brazil’s, but no incumbents. Colombian presidents are only allowed one four-year term, meaning conservative, pro-China President Iván Duque will cast a shadow but not directly participate in the race. The two major issues expected to be at the forefront of voters’ minds are the Chinese coronavirus pandemic and ongoing left-wing terrorism that worsened after the passage of a “peace deal” with the Revolutionary Armed Forces of Colombia (FARC).

Colombia currently has 11 candidates officially on the ballot. The candidate supported by Duque’s Democratic Center, Óscar Iván Zuluaga, is a veteran presidential candidate who lost against Duque’s predecessor, Juan Manuel Santos, and has currently failed to gather any steam. Most observers currently consider another presidential election loser, Gustavo Petro, the former mayor of Bogotá who lost to Duque, the frontrunner, given the enthusiasm on the left for his candidacy. A far-left socialist, Petro once belonged to a leftist terrorist guerrilla and supported Venezuelan dictator Hugo Chávez before rebranding himself as an economist.

Another candidate attracting attention – more so than Zuluaga – is Alejandro Gaviria. Perhaps reflecting the fact that Colombia has experienced one of the most severe outbreaks of Chinese coronavirus in the world, Gaviria was once Duque’s health secretary and is running as a no-nonsense “centrist” that could save the country from both Petro’s socialism and the alleged hardcore conservatism of the Democratic Center. To emphasize the point, Gaviria is representing a coalition called the “Hope Center.” 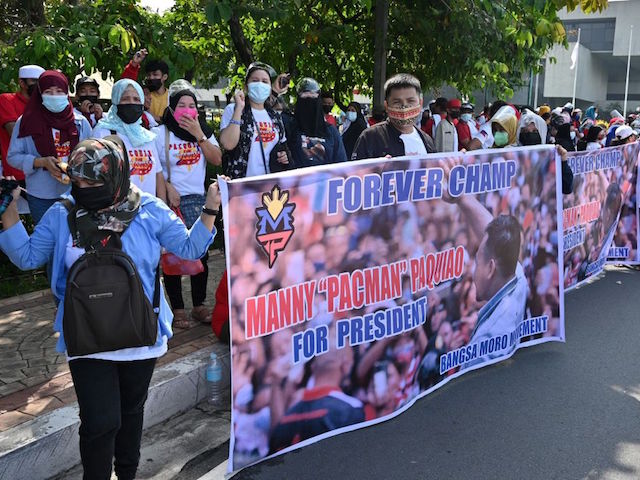 Gathered supporters of boxing icon Manny Pacquiao hold a banner as Pacquiao files his candidacy for the Philippines’ upcoming presidential election, scheduled to be held in May 2022, outside an election office in Manila on October 1, 2021. (TED ALJIBE/AFP via Getty Images)

Like Colombia, the Philippines allows presidents to serve only one term. Rather than prompt a wave of fresh faces to compete for the presidency, however, this law has resulted in Rodrigo Duterte’s messy fingerprints appearing on nearly every single candidate and Duterte himself threatening to appear as a vice-presidential candidate. Among the first candidates to announce they would run is longtime Duterte supporter and legendary boxing champion Manny Pacquiao. Duterte refused to support Pacquiao despite the latter’s backing obviously helping Duterte’s race, instead starting a bizarre feud by calling Pacquiao “a shit” and “too old”; Pacquiao had accused Duterte staffers, but not the president himself, of corruption.

Rumors swirled for months that Davao City Mayor Sara Duterte, the president’s daughter, would run for the top office. One of his top staffers, now-Senator Christopher “Bong” Go, also announced a run for president. Go dropped out quickly from the race, however, and the chaos surrounding the Duterte administration drama paved the way for a new frontrunner: Ferdinand Marcos, Jr. The younger Duterte opted not to run for president, but is on Marcos’ ticket, attracting the popular president’s supporters and establishing a clear lead against the Pacquiao team at press time.

Vice President Leni Robredo, who has often clashed with Rodrigo Duterte, is also in the running, but the spectacle surrounding the other candidates has largely kept the spotlight away from her.

A poll published Sunday by OCTA Research found Marcos and Duterte with 54-percent support and Robredo at a distant second with 14 percent. Pacquiao clocked in at ten percent. 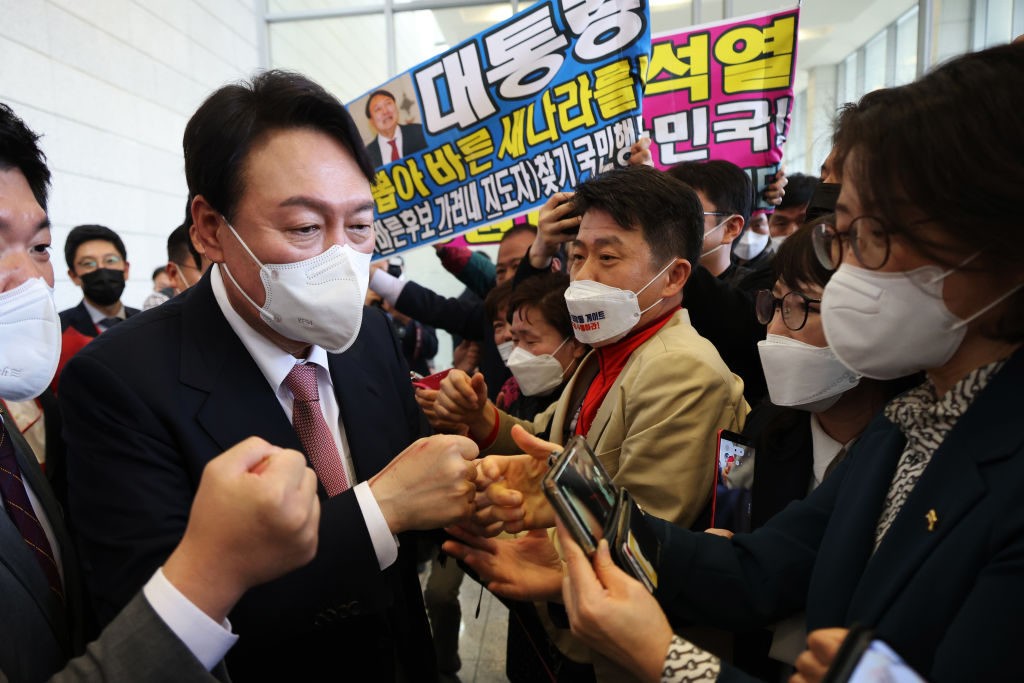 South Koreans have been stuck for five years with a president far to the left of the general public – Moon Jae-in – as a result of a catastrophic collapse in support for the now-defunct Liberty Korea Party under his predecessor Park Geun-hye. Park was impeached and arrested for allegedly allowing a senior member of a cult to view and edit sensitive national security documents, a bizarre scandal that overshadowed any policy debates in the country at the time.

Moon’s Democratic Party has suffered its fair share of scandals, most prominently a string of sexual assault allegations against key members that ended with the former mayor of Seoul, Park Won-soon, dead of an apparent suicide. Prior to his death in April, political observers considered Park a presidential frontrunner.

Liberty Korea has since rebranded itself as the People Power Party and recruited from Moon’s administration. Former prosecutor general Yoon Seok-youl won the party’s primary after defecting from the administration that hired him in a situation similar to Bolsonaro’s relationship with Sergio Moro – Moon vowed to appoint a tough-on-corruption top prosecutor who then publicly complained that he found corruption in an inconvenient place for the president. Comically, opposition members of the party whose presidential primary Yoon just won complained at the time that Yoon would be too loyal to Moon and thus could not be trusted to head the prosecutor’s office.

Yoon is running against hand-picked Moon successor Lee Jae-Myung, the former governor of Gyeonggi Province. Lee won an aggressive primary that left him somewhat battered in the polls, hurt additionally by Yoon’s campaigning against him, centered on accusations of corruption. Lee has also endured criticism for making comments excusing his nephew, whom he defended in court, for murdering his ex-girlfriend and her mother.

Yoon is currently leading Lee in the polls, but only by about one percentage point in a poll published by the firm Realmeter on Monday – a significant drop from prior polls that could partially be the result of Moon pardoning Park Geun-hye, and thus returning her unpopular name to the headlines. 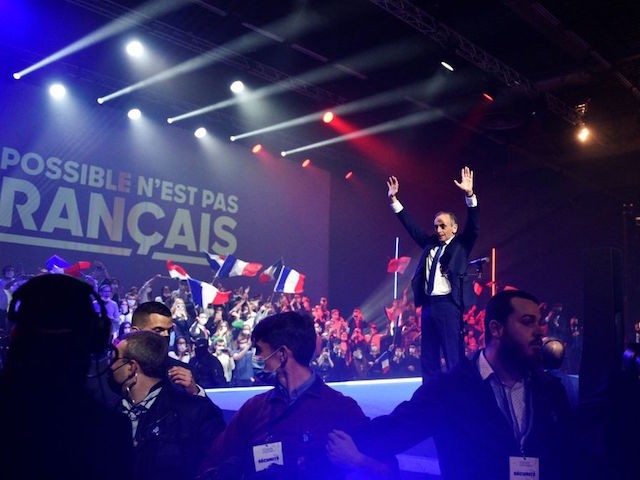 French far-right media pundit and 2022 presidential candidate Eric Zemmour waves to supporters after presenting the name of his new party “Reconquete !” at the end of his campaign rally in Villepinte, near Paris, on December 5, 2021. (JULIEN DE ROSA/AFP via Getty Images)

Current President Emmanuel Macron is facing a tough reelection campaign in France after five years defined by radical Islamic violence (including the beheading of a schoolteacher), street riots, the burning down of much of the Notre Dame Cathedral, and increasingly authoritarian coronavirus policy. Much of the election energy currently is on the right, thanks to writer Eric Zemmour throwing his hat in the ring this month, but Zemmour is attracting the same kind of voters as perennial candidate Marine Le Pen, meaning polls are showing a divided conservative poll and a potential Macron win. Zemmour is also attracting leftist violence: 39 Antifa terrorists were arrested at his first campaign rally and one successfully assaulted Zemmour himself, attempting to put him in a chokehold.