China prominently featured a soldier who participated in the 2020 Galwan Valley battle against India as an Olympics torchbearer during a relay in Beijing on Wednesday, stoking tensions with its next-door neighbor by returning the vicious brawl – which India won – to the headlines.

The Galwan Valley is a strategic location on the border between India’s Ladakh region and occupied Tibet and East Turkistan. In summer 2020, Indian soldiers stationed there identified a group of People’s Liberation Army (PLA) troops that they later said had illegally trespassed into India and appeared to be establishing a permanent presence there. When the Indians approached the Chinese group, they attacked, triggering the battle. At the time, both China and India had modified rules of engagement that did not allow soldiers on the border to carry firearms, so the soldiers fought each other using rocks, sticks, barbed wire, and their bare fists.

The Chinese government has only formally recognized four deaths during the clash, compared to India’s 20, but Indian government reports indicate that the PLA lost twice the number of men that the Indian military did in the exchange. In the months following the violence, Indian news sources reported that troops had stopped hundreds of Chinese soldiers from violating the country’s territorial integrity. Similar violence has not erupted since the June 2020 clash, but fears of renewed violence have remained consistent for nearly two years. 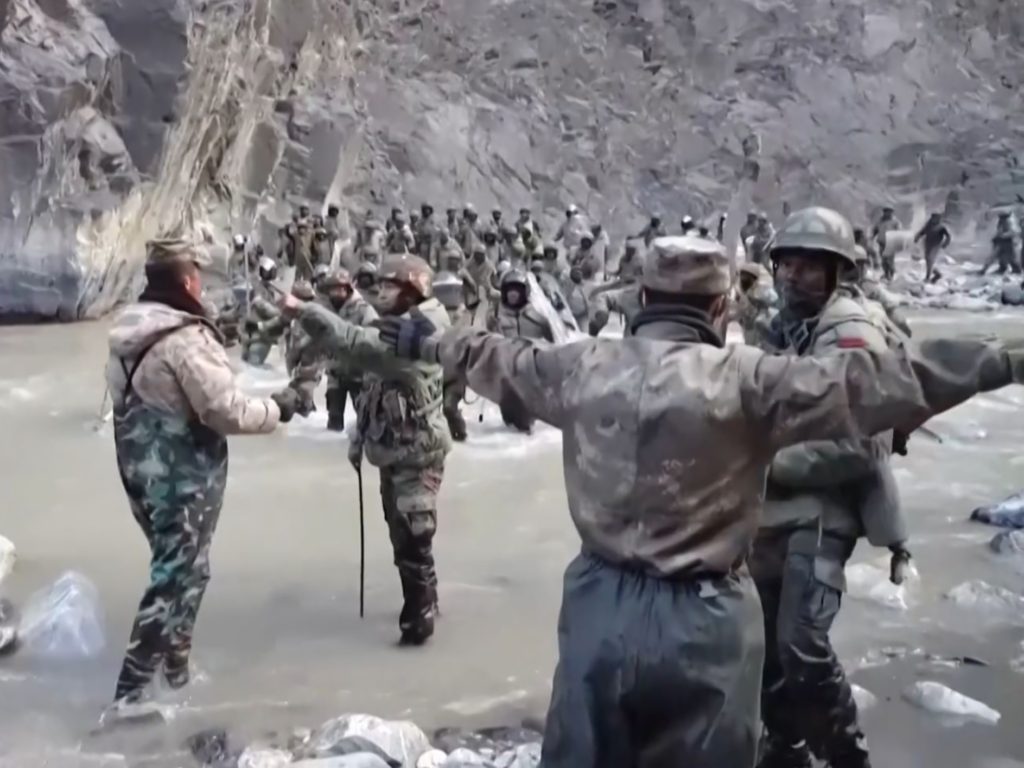 This video frame grab taken from footage recorded in mid-June 2020 and released by China Central Television (CCTV) on February 20, 2021 shows Chinese (foreground) and Indian soldiers (R, background) during an incident where troops from both countries clashed in the Line of Actual Control (LAC) in the Galwan Valley, in the Karakoram Mountains in the Himalayas. (AFP PHOTO / CHINA CENTRAL TELEVISION (CCTV))

The state-run Global Times newspaper dedicated heavy coverage on Wednesday to PLA soldier Qi Fabao, who served as a torchbearer for the relay preceding the Winter Olympics Opening Ceremonies at the end of the week. Qi allegedly “suffered a serious head injury” while brawling with Indian soldiers in the Galwan Valley. The newspaper described him as a “regiment commander” on the border with the Xinjiang military command. China’s Vice Premier Han Zheng lights the torch during the launch ceremony for the Beijing 2022 Winter Olympics Torch Relay in front of the Olympic Tower outside of the closed loop bubble on February 2, 2022 at Olympic Park in Beijing, China. (Kevin Frayer/Getty Images)

Qi was among several communist heroes chosen for the honor. Also included among the torchbearers were Zhang Boli, a Traditional Chinese Medicine (TCM) expert who has endeavored to promote the unverified treatments in light of the Chinese coronavirus pandemic and received top honors from the party. Zhang Yimou, the legendary filmmaker tasked with directing the Opening Ceremonies of both the 2008 and 2022 Beijing Olympics, also held the torch.

Thomas Bach, the head of the International Olympic Committee (IOC), regaled the torch relay with a speech declaring that “Beijing is ready to make history, becoming the first-ever host of both summer and winter editions of the Olympic Games.”

“This is the timeless message that the Olympic flame will send from China to the world: we can only go faster, we can only aim higher, we can only become stronger, if we stand together,” Bach reportedly said.

The choice to highlight one of China’s greatest recent military losses at an Olympics event is a bizarre one, particularly given the lack of any recent escalation in tensions between the two countries. India also has a greatly limited presence at the Winter Olympics, especially given the fact that it is one of the world’s most populous nations and home to some of its steepest mountains. India has sent only one athlete, skier Arif Khan, to the Beijing Games.

Like many other nations trusting China with their athletes, India is already documenting Chinese coronavirus cases within the Olympics “bubble” – the small perimeter where athletes are allowed to roam freely after extensive coronavirus testing. The Communist Party recently announced it would implement the bubble or “closed-loop management” system to prevent coronavirus cases from spreading among Olympics participants. According to the Hindustan Times, Winter Olympics contingent manager for China Mohd Abbas Wani tested positive for Chinese coronavirus on Tuesday, one of six people accompanying Khan.

“Wani is the only member who tested positive. He even had his booster shot. He is not allowed to move out from his room and a retest will be done after 24hrs,” chef-de-mission Harjinder Singh told reporters. Singh is among the small group. “All other team members are fine and staying in separate rooms. Wani’s two pre-departure tests (within 96 and 72 hours prior to departure) came negative.”

Beijing is suffering through what is believed to be its most intense coronavirus outbreak since the pandemic began in Wuhan in late 2019. As China has admitted to manipulating coronavirus statistics, outside observers cannot compare with confidence the little information regarding case totals in the country currently available, but the outbreak in Beijing has triggered lockdowns in multiple neighborhoods and concerns of further action. Chinese officials claim these cases should not affect the Olympics bubble, but officials revealed on Sunday that they had documented 119 coronavirus cases within the Olympic Village. By Wednesday, officials had revealed another 32 Olympics-related coronavirus cases.