Regime media in North Korea published an article on Tuesday praising communist dictator Kim Jong-un for personally overseeing the production of baby formula in the country – an apparent mockery of America’s ongoing critical shortages of the infant product.

Voice of Korea, a North Korean government propaganda outlet, claimed that Kim personally taste-tested the baby formula to ensures that infants would enjoy it. The article claimed that Kim worked to manufacture the “dry milk … to provide the children across the country with nourishing foods” in September 2021, which calls into question why the outlet published an article on the event this week.

“On the early morning of September 15, Juche 110 (2021), a senior official of the Pyongyang Municipal Committee of the Workers’ Party of Korea received a phone call from the respected Kim Jong-un,” Voice of Korea claimed. “Kim Jong-un said he had just tasted the diluted dry milk produced in Pyongyang City for trial and pointed out the shortcomings one by one.”

While the article did not use the term “infant formula” – likely the product of translation from the original Korean – it explicitly described the dry milk as intended for feeding children. It also did not mention the current situation in the United States, but also did not offer any other reason why it would be reporting on news from September 2021 now. Voice of Korea claimed that Kim convened ruling communist Workers’ Party of Korea (WPK) leaders to formalize the “policy of the Party to provide the children across the country with nourishing foods including dairy products and presented specific tasks and ways for its implementation.”

The note appeared to be an attempt to contrast the draconian North Korean government with America, where Biden’s top spokeswoman laughed when asked who in the administration was overseeing baby formula supply.

“Kim Jong Un tasted the trial dry milk and made a phone call early in the morning,” Voice of Korea claimed. “He looked like a mother who tastes a food for her child first to see if it is too hot and if it is too salty.”

In reality, North Korea’s population is one of the most malnourished thanks to communist corruption and mismanagement. The United Nations estimated last summer that nearly half of all North Koreans, about 42 percent or 11 million people, were suffering from malnutrition.

“In an indication of chronic or recurrent malnutrition, around 1 in 5 children under the age of 5 in North Korea had suffered stunted growth as of the end of 2020,” the Korea Herald, citing the U.N., reported at the time. “The child stunting rate came to 18.2 percent, or about 300,000 children under the age of 5, according to the report. The figure is an improvement from 26.2 percent in 2012, but still high in a global comparison.”

In America, panicked mothers have grown increasingly concerned as some states reported as much as half of their formula supplies depleted. Baby formula is a critical product for parents of infants whose mothers cannot or choose not to breastfeed, and for mothers who are working on building up their supply – the formula provides nutrition while the supply meets the baby’s demand.

The formula shortage began following the Food and Drug Administration (FDA) shutting down one of the country’s largest formula manufacturing plants in February – run by Abbott Labs, which makes the Similac line of baby formula – in response to a reported bacterial outbreak. The shutdown prompted increased demand of other brands that, in turn, resulted in shortages. The FDA has been reluctant to admit a shortage exists and denied that the issue required the use of the Defense Production Act, which allows the federal government to mandate the manufacture of products necessary for national security.

“I don’t think we need the Defense Production Act. I think the manufacturers are ready to go,” FDA Commissioner Robert Califf said on Tuesday. “And they’re going to increase their production. In fact, they already have. Importantly, there’s been more formula bought, about 10% more in the last month, than in the month before the recall. So, there is formula out there. It’s just not in the right place at the right time.”

Major retailers like Walmart are shipping formula supplies across the country to meet demand.

North Korean media’s abrupt coverage of baby formula is also peculiar given that it claims to be in the midst of a major public health disaster. After denying that it had documented a single case of Chinese coronavirus within its borders for two years, Pyongyang admitted last week that there had been a “break” in pandemic prevention and that it had confirmed both infections and deaths attributable to the virus. In less than a week, North Korean media admitted to upwards of 1 million cases of coronavirus nationwide and Kim reportedly ordered a nationwide lockdown.

Rodong Sinmun, the regime’s national newspaper, announced on Tuesday that the North Korean military would “play the role of the main force in defending the country’s safety and people’s lives in the present public health crisis,” meaning soldiers would be tasked with distributing the little medicine and hygienic supplies the country has access to at the moment. 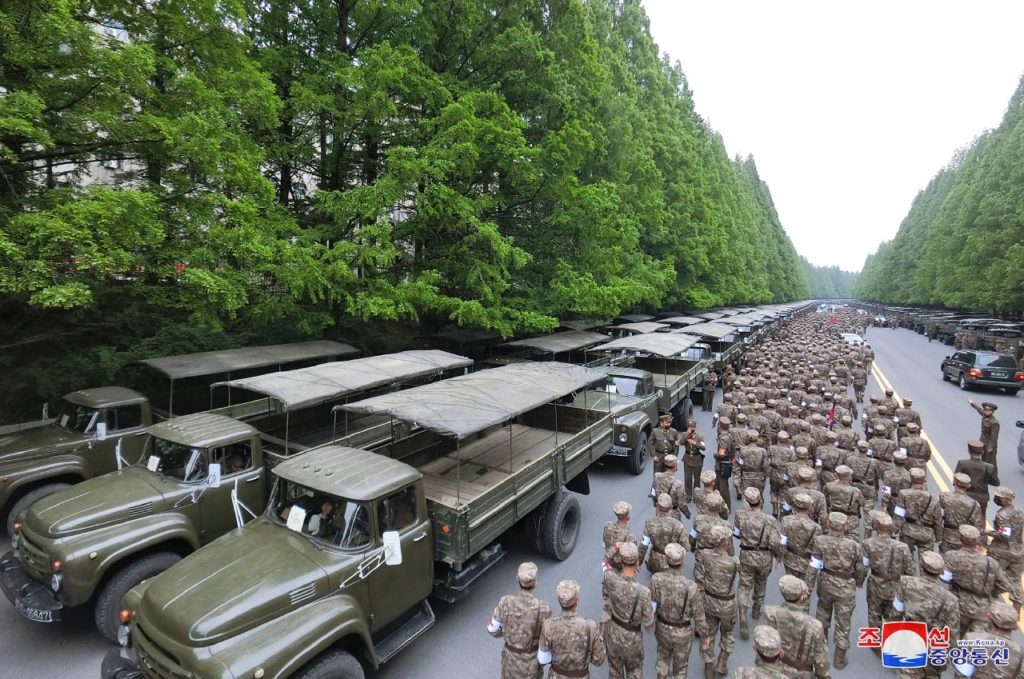 North Korea has deployed its military to help fight a growing outbreak of the coronavirus. (AFP)

The soldiers, the report asserted, “would devote themselves to the transport and supply of medicines with the political awareness that the supply of medicines is not a mere practical work for medical treatment, but a noble patriotic work for conveying the warm sincerity of the respected Comrade Kim Jong Un to the people.”