The Chinese Communist Party’s National Bureau of Statistics reported on Tuesday that it had documented a decline in its population of about 850,000 people in 2022, the first official drop since 1962 despite many demographers warning that China may have been in population decline since at least 2020.

Chinese state media outlets decried “pessimists” for expressing concern regarding the future of the Chinese economy given bleak prospects for China’s birth rate, which has continued its collapse despite dictator Xi Jinping expanding the brutal “one-child policy” to two children in 2016, and three in 2021. The Global Times, China’s most aggressive English-language state propaganda outlet, argued that the population collapse was a direct result of China’s economic success, attributing it to low birth rates rather than mass death caused by the Chinese coronavirus pandemic.

Chinese birth rates have for years fallen dramatically below the 2.1 children per mother universally accepted as the “replacement fertility rate” necessary to keep a country’s population stable, largely as a result of the “one-child policy.” The policy outlawed women from having a second child and was enforced through mass killings of newborns and unborn babies. The Global Times has boasted in the past that the “one-child policy” killed 400 million people, not counting mothers dying during the course of government-forced abortions. The trauma of the one-child policy coupled with an outsized male population and widespread anti-communist sentiment among Chinese millennials – who have adopted a “lying flat” attitude of failing to build families, seek promotions at work, or exhibit any ambition that could be used to the benefit of the Communist Party – has resulted in little prospects for the baby boom necessary to reverse the trend.

Some demographers predicted, using unofficial or indirect official statistics, that China began declining in population in 2020. The National Bureau of Statistics delaying the publication of its population data in 2020, following the mass deaths triggered by the Wuhan pandemic, escalated warnings of a population collapse, but the government incident that modest population growth occurred that year. Similarly, in 2021, several population experts citing hospital statistics to claim the population had declined that year, but the regime denied it.

On Tuesday, the government finally admitted to a shrinking population. 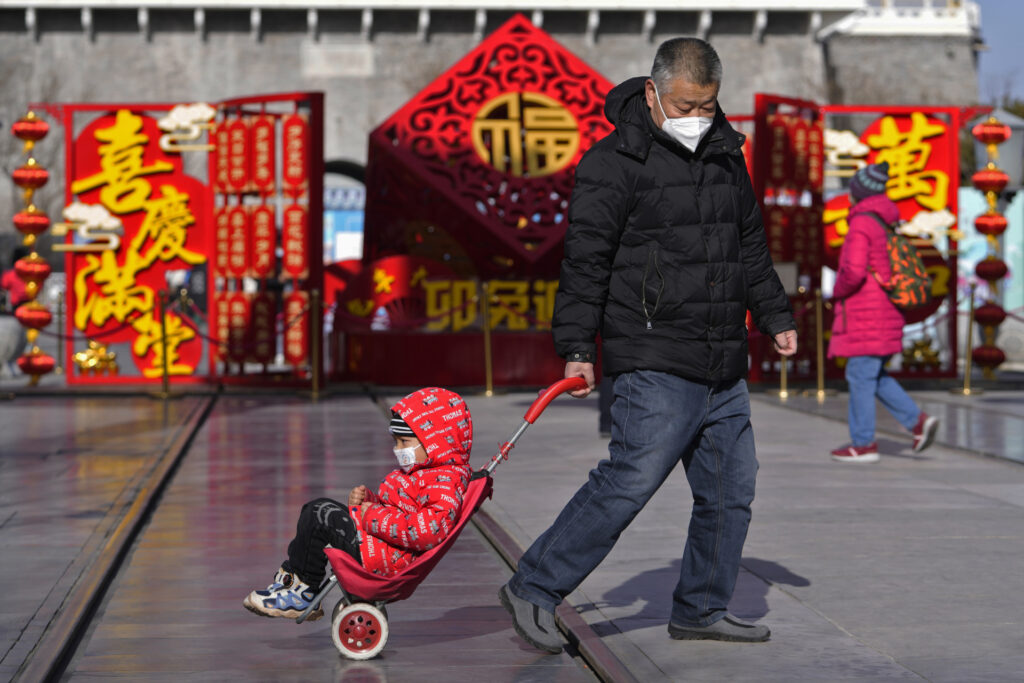 A man pulls a child past a Lunar New Year decoration on display at the Qianmen pedestrian shopping street, a popular tourist spot in Beijing, Tuesday, Jan. 17, 2023. China has announced its first population decline in decades as what has been the world’s most populous nation ages and its birthrate plunges. (AP Photo/Andy Wong)

“The population in the Chinese mainland [not including occupied territories Hong Kong and Macau] recorded negative growth for the first time in 61 years, decreasing by 850,000 in 2022,” the Global Times reported. “In 2022, the number of births was 9.56 million with a birth rate of 6.77 per thousand, marking the first time since 1950 that new births have fallen below 10 million and the third year the country’s birth rate has fallen below 1 percent, data from the NBS showed.”

The last time a population decline occurred was in 1962, the tail end of Mao Zedong’s Great Leap Forward, a communist famine and purge that killed 45 million people.

The new statistics showed that the country was home to about 32 million more Chinese men than women, a slight improvement in the ratio from the 34 million more men than women documented in recent years. The low population of Chinese women, particularly of child-bearing age, is in part due to the “one-child policy”: given the option of keeping one child, many Chinese families chose to kill daughters until they successfully conceived a son.

Chinese regime-approved “experts” quoted in the Global Times insisted that the population decline was impossible to avoid due to China’s major economic success.

“The data is not unexpected and conforms to the law of population development. Negative population growth is the inevitable result of the country’s long-term low fertility rate,” an “expert” identified as Professor Yuan Xin asserted. “The population size during the early stage of contraction will still be huge, which means the country will maintain its huge market.”

Similarly, another “expert,” researcher Su Hainan, said population collapse was a “natural result of social and economic development” and compared it to the shrinking in population growth in the West (America’s birth rate increased for the first time in seven years in 2021).

Predictions from experts not quoted in government media on Tuesday were far direr.

“It’s unquestionable that China will not see population growth from now on, as an endless period of population decline began in 2022,” demographer He Yafu told the South China Morning Post. “There’s no hope that the decline can be reversed.” 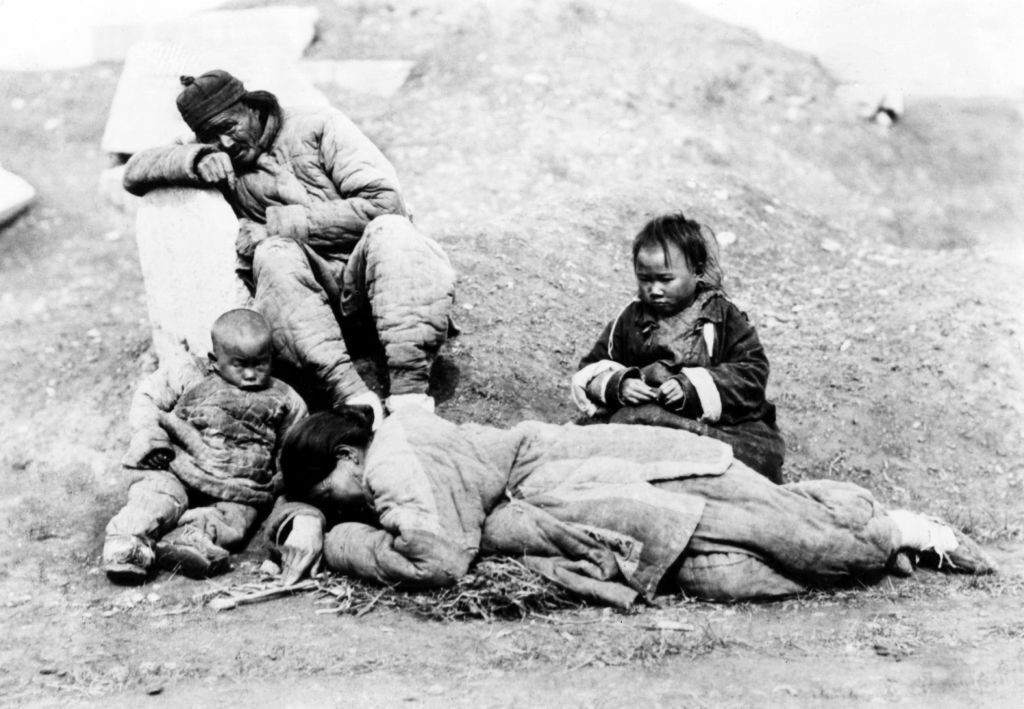 File/China: A starving peasant family, victims of the disastrous economic policies of the ‘Great Leap Forward’ leading to the ‘Great Famine’ (1958 – 1961). (Picture from History/Universal Images Group via Getty Images)

He, who has appeared as an expert in the Global Times, had warned of negative population growth for years. In late 2021, he predicted that birth rates for 2020 coming in low would result in a decline that year. The Chinese Communist Party delayed the publication of its annual population report that year, prompting speculation officials were doctoring the numbers to save face. When the report finally surfaced in May 2021, it claimed that China’s population grew by 0.53 percent in 2020.

“The latest Chinese census, which was completed in December but has yet to be made public, is expected to report the total population of the country at less than 1.4bn, according to people familiar with the research,” the Financial Times reported in 2021, referring to statistics for 2020. “In 2019, China’s population was reported to have exceeded the 1.4bn mark.”

Researcher Yi Fuxian, who published a banned-in-China book on the nation’s population collapse, predicted the population would begin to decline in 2017; he later adjusted his prediction in 2019 and stated that his research suggested the population began to drop in 2018.

China’s death statistics, particularly related to the Chinese coronavirus pandemic, have aroused similar suspicion to its birth rate numbers. The World Health Organization (W.H.O.) has repeatedly condemned the Chinese government in the past two months for its “heavily underreported” coronavirus deaths and its lack of transparency with pandemic data. Chinese officials changed their requirements for what counts as a coronavirus death late last year following a decision to dispense with the brutal lockdown and quarantine policy it had implemented for years – which also resulted in suicides, starvation deaths, and other state homicides likely underreported.

A British analytics company, Airfinity, estimated citing local hospital data, in late December that about 5,000 Chinese people were dying a day due to the Chinese coronavirus.