Over the weekend posters depicting Democratic State Senator Wendy Davis, a Texas gubernatorial candidate, as an “Abortion Barbie” were spotted in Los Angeles. They appeared as the state senator traveled to California late last week for a fundraising event with liberal Hollywood A-listers.

The life-sized posters show Davis as a Barbie with an exposed fetus in her womb. They say, “Hollywood welcomes Abortion Barbie Wendy Davis.”

Davis’ campaign was quick to comment on the posters, and used them as an opportunity to attempt to paint her gubernatorial opponent, Greg Abbott, as being anti-woman.

The Davis campaign sent a statement to the San Antonio Express-News that said, “Greg Abbott’s refusal to denounce these nasty campaign posters is offensive but not surprising. This is just another in a long line of offensive actions and comments by Greg Abbott in an attempt to demean Wendy Davis and women across Texas.”

According to the Express-News, the posters were created by street artist “Sabo” and funded by Kathryn Stuard, a woman who lives in Midland, Texas.

“The artist is very edgy… I do support [Greg] Abbott but the campaign had nothing to do with these,” Stuard reportedly told the Express-News. She never saw the posters that Sabo was working on–her donation was based on the fact that she liked his previous work.

Sabo is the same artist who was behind the Ted Cruz posters that were plastered around Beverly Hills in March, showing the senator with photoshopped tattoos and smoking a cigarette. Those posteres appeared at popular L.A. clubs like the Viper Room, the Seventh Veil, and Whiskey-a-Go-Go. 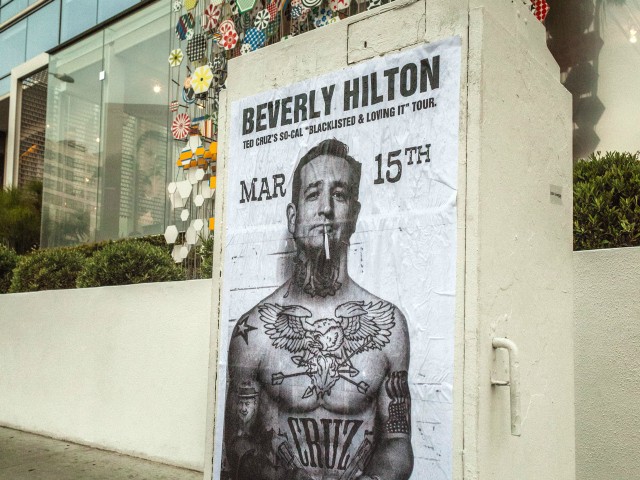 Davis was in Hollywood over the weekend for a soiree hosted by superstars J.J. Abrams, Jeffrey Katzenberg and Steven Spielberg. Breitbart Texas covered the event, which was held on the roof of Abram’s production company Bad Robot, prior to it occurring. Guests were charged $1,000 at the door. An additional $10,000 contribution allowed party-goers to become a co-hosts; a $25,000 donation constituted host status.

Davis has been criticized for relying heavily on funding from outside of Texas. Breitbart News reported in March that 25 percent of Davis’ money has come from other states–$3.8 million of the $15 million she has raised so far was given by supporters from outside the Lone Star State.

The artist described in this article previously created artwork for Breitbart California.