MCALLEN, Texas–Illegal aliens are being allowed to fly on commercial airliners without valid identification, according to the National Border Patrol Council (NBPC). “The aliens who are getting released on their own recognizance are being allowed to board and travel commercial airliners by simply showing their Notice to Appear forms,” NBPC’s Local 2455 Spokesman, Hector Garza, told Breitbart Texas.

“This is not the CBP [Customs and Border Protection] or another federal agency renting or leasing an aircraft, these are the same planes that the American public uses for domestic travel,” said Garza. “This just adds insult to injury. Not only are we releasing unknown illegal aliens onto American streets, but we are allowing them to travel commercially using paperwork that could easily be reproduced or manipulated on any home computer. The Notice to Appear form has no photo, anyone can make one and manipulate one. They do not have any security features, no watermark, nothing. They are simply printed on standard copy paper based on the information the illegal alien says is the truth.”

Spokesman Garza continued, “We do not know who these people are, we often have to solely rely on who they say they are, where they say they came from, and the history they say they have. We know nothing about most of them, ICE releases them into the American public, and now they are boarding aircraft at will with a simple paper document that anyone can easily alter or reproduce themselves.” 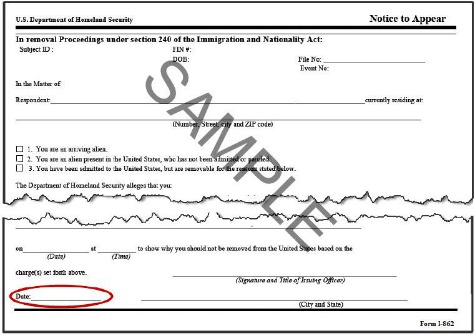 The shocking assertions by Garza were further validated by the national body of the NBPC. Breitbart Texas obtained an exclusive statement from the NBPC.

“The National Border Patrol Council adamantly opposes the decision of DHS to release the illegal aliens who have been transported from the Rio Grande Valley Border Patrol Sector to other locations for processing. The lack of consequences has furthered this crisis and will only continue to do so. The fact that TSA is accepting the I-862 (Notice to Appear) as a form of identification and allowing illegal aliens to travel commercially shows just how little regard the federal government has for its own immigration laws.”

Breitbart Texas also spoke with Shawn Moran, the vice president of the NBPC and he stated, “Why waste money and effort transporting people from the RGV if we are only going to release them with no real way to track them? Why are we allowing them to travel commercially using paperwork that could easily be reproduced or manipulated on any home computer.”

Spokesman Garza highlighted the significance of the NBPC’s assertions regarding security threats posed to the American public and stated, “The threat this poses from terrorists upon the American people is absolutely unacceptable. Central Americans are not the only people crossing our border and being released. Does anyone actually think that cartels and others criminal or possible terrorist organizations are not taking advantage of the fact that we are having to leave our border wide open while we reassigning the majority of our agents to process family units and minors? Of course this situation is being exploited by such threats.”

The concerns raised by the NBPC about possible security risks, especially in regards to the safety of commercial airliners, are reinforced by a 2012 United Nations (UN) report previously covered by this reporter. The UN Office on Drugs and Crime’s “Transnational Organized Crime in Central America and the Caribbean” revealed that individuals from the terror-prone Somalia were traveling to Central America in efforts to illegally enter the United States. The report states:

In light of the UN report, possible public safety risks posed by illegal aliens who claim to be from Central America flying unidentified and without effective documentation are further illuminated by a previous in-depth analysis of Somalia by the nonpartisan Council on Foreign Relations. They wrote on Somalia:

“Its porous borders mean that individuals can enter without visas, and once inside the country, enjoy an almost complete lack of law enforcement. Somalia has long served as a passageway from Africa to the Middle East based on its coastal location on the Horn of Africa, just a boat ride away from Yemen. These aspects make Somalia a desirable haven for transnational terrorists, something Al-Qaeda has tried to capitalize on before, and is trying again now.”

Breitbart Texas reached out to the TSA (Transportation Security Administration) for comment without receiving a response at the time of this article’s publication.