Texas Governor Greg Abbott gathered a group of elected officials and members of the military together on Monday to sign a proclamation recognizing February 2nd as Chris Kyle Day, in honor of the native Texan and Navy SEAL who was the most lethal sniper in American military history.

In addition to naming the day for him, Kyle would also be honored by flying the Texas flag at half-staff at the Texas Capitol, and at the Texas State Cemetery, where he is buried.

“America needs heroes,” Abbott began his remarks, saying how heroes like Kyle have not just inspired us but have protected us, and “made the United States the premier nation in the world.” Kyle and other members of our military have faced risks and suffered consequences, said Abbott, that “most Americans can’t comprehend but should appreciate.”

Kyle served four tours of duty in Iraq, and was credited with 150 sniper kills. Sadly, Kyle was killed on February 2, 2013 by a fellow veteran allegedly suffering from Post-Traumatic Stress Disorder who Kyle was counseling. His autobiography, American Sniper, was turned into a movie directed by Clint Eastwood that has set box office records on its opening weekend and still continues today to be a top ticket-seller. According to Fox 7 Austin, the movie has made nearly $250 million in theaters.

As Breitbart Texas reported, Abbott had first announced last Friday that he would be declaring February 2nd Chris Kyle Day. At Monday’s press conference, Abbott said that he had called Kyle’s wife Taya on Friday morning, to get her blessing.

However, the day was about more than just Chris Kyle, but was to honor “every man and woman who has ever worn the uniform of the United States Military,” and especially those who came from Texas. Abbott explained that he believed this is what Kyle would want, because “he’s one of a band of brothers and sisters who fought side by side.”

“Chris Kyle is a legend,” said Abbott, “And we are proud that he is a Texas legend.” And so, to honor Kyle and honor the military and veterans of Texas, Abbott signed the proclamation declaring February 2, 2015 Chris Kyle Day. 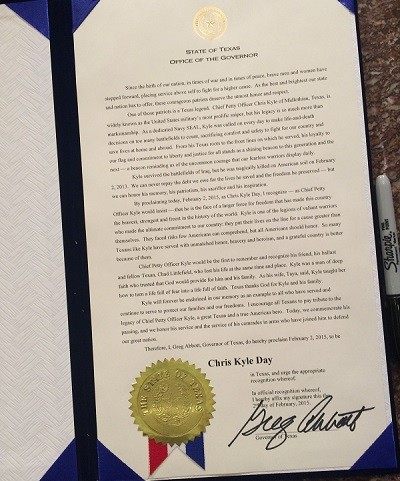 Since the birth of our nation, in times of war and in times of peace, brave men and women have stepped forward, placing service above self to fight for a higher cause. As the best and brightest our state and nation has to offer, these courageous patriots deserve the utmost honor and respect.

One of those patriots is a Texas legend. Chief Petty Officer Chris Kyle of Midlothian, Texas, is widely known as the United States military’s most prolific sniper, but his legacy is so much more than marksmanship. As a dedicated Navy SEAL, Kyle was called on every day to make life-and-death decisions on too many battlefields to count, sacrificing comfort and safety to fight for our country and save lives at home and abroad. From his Texas roots to the front lines on which he served, his loyalty to our flag and commitment to liberty and justice for all stands as a shining beacon to this generation and the next — a beacon reminding us of the uncommon courage that our fearless warriors display daily.

Kyle survived the battlefields of Iraq, but he was tragically killed on Texas soil on February 2, 2013. We can never repay the debt we owe for the lives he saved and the freedom he preserved — but we can honor his memory, his patriotism, his sacrifice and his inspiration.

By proclaiming today, February 2, 2015, as Chris Kyle Day, I recognize — as Chief Petty Officer Kyle would insist — that he is the face of a larger force for freedom that has made this country the bravest, strongest and freest in the history of the world. Kyle is one of the legions of valiant warriors who made the ultimate commitment to our country: they put their lives on the line for a cause greater than themselves. They faced risks few Americans can comprehend, but all Americans should honor. So many Texans like Kyle have served with unmatched honor, bravery and heroism, and a grateful country is better because of them.

Chief Petty Officer Kyle would be the first to remember and recognize his friend, his ballast and fellow Texan, Chad Littlefield, who lost his life at the same time and place. Kyle was a man of deep faith who trusted that God would provide for him and his family. As his wife, Taya, said, Kyle taught her how to turn a life full of fear into a life full of faith. Texas thanks God for Kyle and his family.

Kyle will forever be enshrined in our memory as an example all who have served and continue to serve to protect our families and our freedoms. I encourage all Texans to pay tribute to the legacy of Chief Petty Officer Kyle, a great Texan and a true American hero. Today, we commemorate his passing, and we honor his service and the service of his comrades in arms who have joined him to defend our great nation.

Therefore, I, Greg Abbott, Governor of Texas, do hereby proclaim February 2, 2015, to be

Patrick, who was there to witness Abbott signing the proclamation, showed his support in a statement provided to Breitbart Texas. “As Lieutenant Governor I proudly support Governor Abbott’s decision declaring February 2nd officially as Chris Kyle Day in Texas,” wrote Patrick. “I appreciate his efforts to recognize this American and Texas hero whose bravery, courage and ultimate sacrifice reminds us all that our freedom has a price. We are thankful for not only Chief Petty Officer Kyle’s service, but for the men and women that are protecting our freedom and our country, every single day.”

Supporters have been encouraged to post on social media using the hashtag #ChrisKyleDay.