Pastor Terry Holcomb, Sr., president and founder of Texas Carry, echoed the Governor’s remarks when he said, “Gun rights are about more than guns – It is about liberty. Texas needs to lead on liberty.” 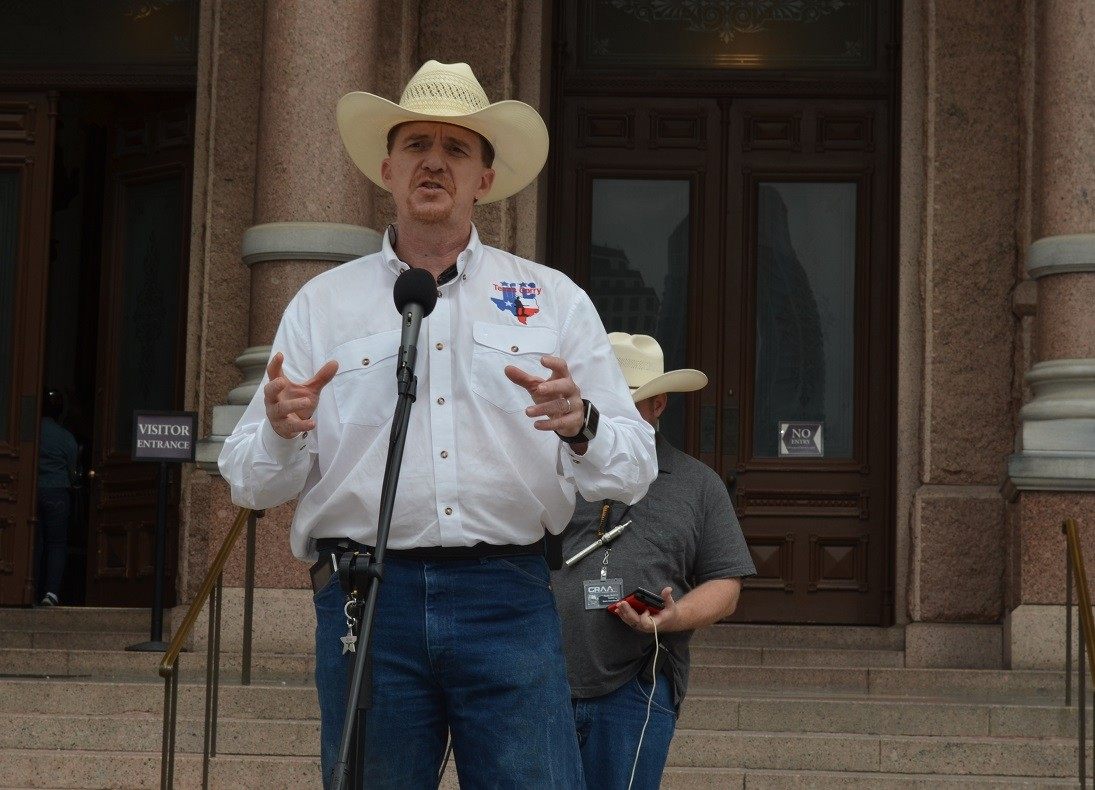 Holcomb said that Texas ranks right up there with California, Illinois, and New York, when it comes to the right of citizens to openly carry a firearm for self-defense. He promised that some form of open carry will pass the legislature this session. He then challenged the crowd, “But, if we are going to have liberty, we have to elect liberty minded candidates.” He encouraged people to run for office and challenge incumbent elected officials who do not protect liberty.

Waylon Montague, executive vice-president of Gun Rights Across America told Breitbart Texas, “We are here today to promote teamwork among liberty minded people.” He said there are many separate organizations fighting for a variety of pro-gun bills. “Each organization has passion for their cause.”

“Some of these groups have an ‘all or nothing’ mentality about their issues,” he explained. “All or nothing often gets you nothing.” He made the analogy of a “hail Mary” pass in football. “How many times does that play not work? You must have a solid game plan.”

Breitbart Texas asked him about the controversial Open Carry Tarrant County group that many believe nearly killed the possibility of passing open carry in this session. “To each their own,” Montague said. “I don’t agree with some of their tactics. There are more appropriate methods to achieve the desired results.”

While he said he would not be satisfied with the passage of open carry for licensed holders, he acknowledged that it would be “a step in the right direction.”

Open Carry Texas founder C.J. Grisham is a Fort Hood Master Sergeant who became famous after he was arrested by police when he was walking down a country road with his son while legally carrying a rifle across his chest. After a series of alterations of his charges and two trials, Grisham was eventually found guilty of “interfering with police duties.” 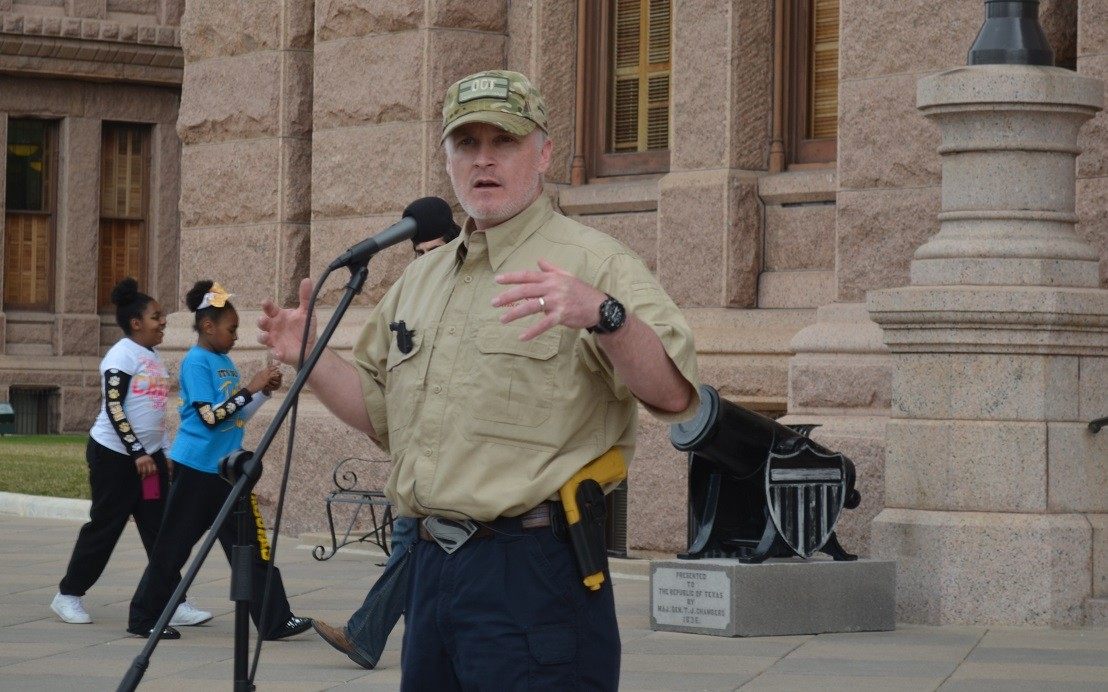 Two months ago, Grisham was named as a “Texan of the Year Finalist” by the Dallas Morning News Editorial Staff.

Grisham told the crowd, “We have a lot of patriots and Facebook rangers. But how many people are willing to put some skin in the game.” He said Open Carry Texas has conducted more than 3,000 walks across Texas while openly carrying guns. “Not one person was injured, killed, raped, assaulted or robbed while we were carrying these guns,” he stated. “And we were carrying the scary looking guns.”

He thanked the attendees for their support. “Without you, I am just a crazy guy walking with his son while carrying a gun,” Grisham explained. “Our guns are meant to protect us against tyranny.” He said the open carry groups across Texas are now 60,000 members strong.

Pat Cook told the crowd he has a unique perspective on not being allowed to carry a gun for protection. The U.S. Army soldier who has served in combat in Iraq had the unfortunate experience of being on Fort Hood last year when Army Specialist Ivan Lopez went on a shooting rampage that left four people dead and sixteen people injured. 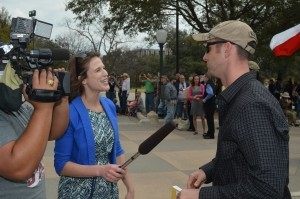 Patrick Cook, founder of Come and Take It Texas, being interviewed by local news media.

“I am someone who knows what it means to be stripped of their dignity,” Cook said in a highly emotional speech. “I was laying on my belly reaching for a gun I knew wasn’t there.”

Fortunately, Cook was not one of those who was injured physically by the attack, but the incident left him with clear emotional scars. “It is exhausting to have to watch everyone every single day,” he explained. “It’s like being on a deployment that never ends.”

In discussing rights versus privileges, Cook said a privilege is a “lien placed on a liberty.”

In sharp contrast to the 2013 rally, Texas State Representative Jonathan Stickland (R-Bedford) was the only elected official to speak. The 2013 rally had a long list of elected officials standing with the groups to speak. It is possible that this is a reflection of the negative press created by the Open Carry Tarrant County group’s actions.

Stickland is a strong supporter of what is known as “Constitutional Carry” (open carry without a license). While his bill is said by many to have little chance of passage, Stickland pledged, “I will offer a Constitutional Carry amendment to any gun bill that comes to the floor of the House for a vote.”

“We will have a record vote on Constitutional Carry,” he declared. He said activists must push hard for what they want and not compromise on liberty because the “legislature will give you only what you are willing to take.” 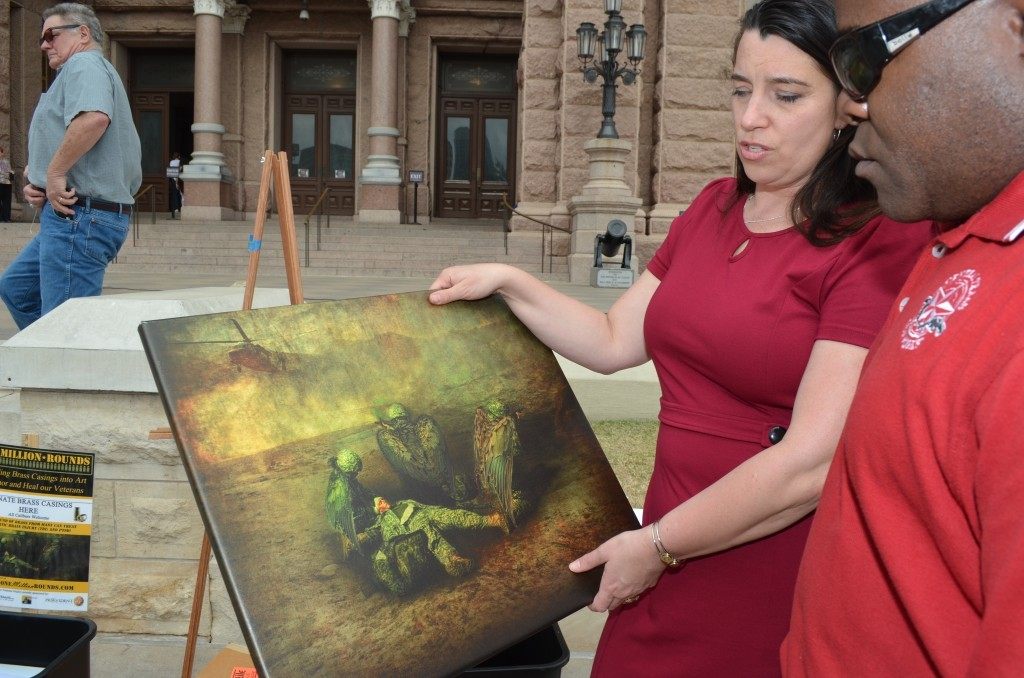 Michael Cargill, owner of Central Texas Gun Works and host of Come and Talk It Radio Show told the audience they were gathered at “one more session asking for the Legislature to give us something we already should have.” He warned the audience there were people in the capitol who were attempting to roll back gun rights in Texas. “Garnet Coleman wants to repeal the Texas Stand Your Ground Law,” Cargill stated. He encouraged the activists to continue to burn up the phone lines of legislators an d push for open carry without a license. But he said that is not enough. “You need to make an appointment and speak directly to your representative on this issue.”

State Rep. James White (R-Woodville) was scheduled to speak to the group but his flight to Austin was grounded. Other speakers included congressional candidate for House District 8, Craig McMichael and Melanie Davis, Founder of Love Your Veterans. 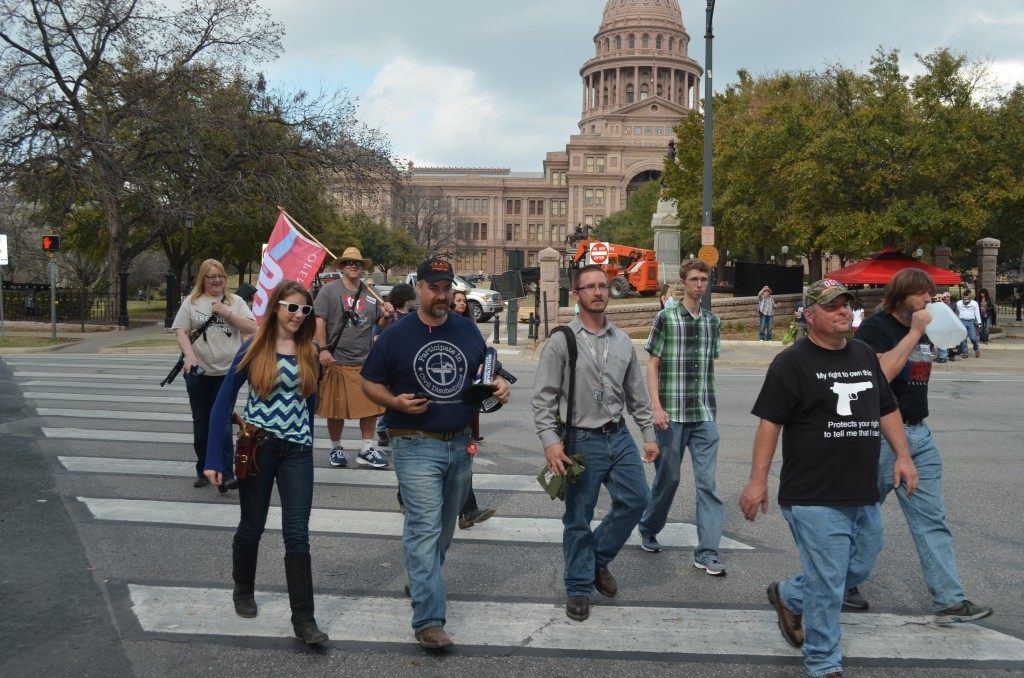 Members of Open Carry Texas march from the Texas Capitol down Congress Avenue while legally carrying rifles and antique pistols.

Following the rally, members of Open Carry Texas conducted a march down Congress Avenue. Several members of the group in the march were openly carrying rifles and antique handguns. The Texas Department of Public Safety (DPS) has instituted a policy of not allowing any visible firearms on the grounds of the Texas Capitol. Activists said they do not know what statutory authority the DPS has to make that policy. The policy came into effect after one Open Carry Texas member was arrested on the capitol grounds while legally openly carrying a firearm.