In two back-to-back undercover operations conducted in neighboring Texas Gulf Coast counties, a total of 24 alleged child predators were arrested. These stings, carried out on back-to-back days this week, sought to identify and apprehend alleged perverts who surfed social media websites in search of vulnerable children for sex.

On Tuesday, March 31, Fort Bend County announced a dozen suspects were apprehended and slapped with charges of the solicitation of a minor following attempts to lure children for sex. The three-day operation took place in Fort Bend County, southwest of Houston.

Fort Bend is among the top ten growing “suburban counties” in the state, which Breitbart Texas reported. It was also named the fastest growing county in the Greater Houston area by the US Census Bureau. Houston is located in the adjacent Harris County.

The sting was conducted with the county’s Sheriffs Office and the Houston Metro Internet Crimes Against Children (ICAC) Task Force. Last year, Breitbart Texas reported on the efforts of Governor Greg Abbott, who was then the state’s Attorney General, to expand ICAC enforcement actions across Texas.

KHOU-11 reported that the operation focused on identifying and arresting predatory adults. Task force agents posed as minors online to lure the suspects into engaging “in sexual contact with children.” Other officers were waiting at another location to arrest them.

According to the TV news outlet, most suspects had alcohol and condoms with them. Detectives said one had a pistol. Some were embarrassed when they were caught. All 12 were charged with online solicitation of a minor and attempted sexual assault and, as of press time, they remained in custody at the Fort Bend County Jail.

Seven of these suspects received bonds of $50,000 for each charge levied. Two of those who were arrested got additional charges for evading arrest, speeding, and carrying a weapon. Three of the suspects got lesser bonds ranging from $20,000 to $40,000 for at least one of the two charges.

Fort Bend County Sheriff Troy E. Nehls called the sting “a warning to the criminals out there preying on our children.” He admonished, “Be careful when you knock on that door, because you never know who is behind that door.”

On the day before, Monday, March 30, another dozen men were arrested in a similar undercover sex sting operation in Harris County. Most of the connections with youngsters in this crime bust were made in online chat rooms and over cell phone apps.

According to NewsFix, the men showed up to a Northwest Houston apartment thinking they were meeting the children they had been chatting with online. Nearly 10 police agencies participated in this sting operation . These suspects were charged with online solicitation of a minor.

At a press conference, Harris County District Attorney Devon Anderson stated that at the undercover location, most of the suspects were arrested in possession of alcohol and condoms. One also had a gun while another had the drug Ecstacy. 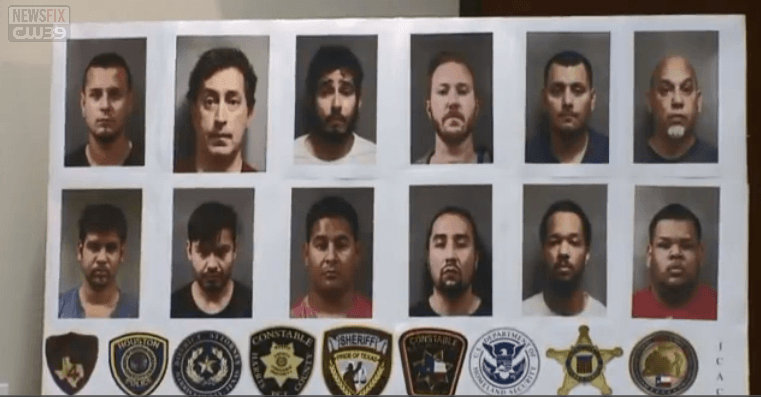 The NewsFix report pointed out that the apprehended perverts came from all different walks of life and ethnic backgrounds. Two were homeless, two were lab technicians, and some were married with young children.

“Most everything was done through a mobile app,” a Harris County police officer told the news media, adding that parents should always ask about unfamiliar apps on their child’s phone.

Law enforcement also cautioned parents to stay involved in their children’s cyber lives by playing “private detective.” They insisted that mom and dad “get nosy” and “invade your kid’s privacy” because it is the best way to keep those children safe.

“You have got to be aware of what your children are doing online,” Anderson added.

In November, Nehls told Breitbart Texas that parents should trust their kids but verify their online activity. “Get their passwords. If they are in their room for a long period of time, walk in and see what they are doing and who they are talking to online.”

Breitbart Texas had reported on a similar collaboration between the Fort Bend County Sheriff’s Office and the ICAC. Called “Operation Turkey Shoot” this maneuver was designed to identify adults who were looking to engage in sexual activity with teenagers. Nehls explained that law enforcement officers cruised social media and other web sites posing as teenage girls between the ages of 13-15. Once they isolated the sexual deviants, they set up in-person meetings.

Nehls also promised to continue to put these “monsters” behind bars.