HOUSTON, Texas — Houston Police shot and killed the driver of car who reached back into his vehicle at the end of a high speed pursuit on Wednesday morning. The incident began when 41 year old Frank Ernest “Trey” Shephard, III was pulled over for changing lanes without a signal and what police call “other suspicious activity”.

He was driving a full sized dark blue Chrysler 300 sedan. Police say that Shephard pulled away from the officer attempting to stop him, and the chase was on.

It started in the Crosstimbers area off U.S. 59, proceeded on the Beltway to Wallisville Road, meandered through parking lots before coming out on Castlegory Road, where Shephard hit one car, injuring the driver, and then struck an SUV. The entire chase lasted about 15 minutes, and Houston TV stations carried the last five minutes, where viewers could see the deadly end.

Police were right behind him during the entire pursuit, and jumped from their cars, weapons drawn and yelling for the driver to get on the ground. He reached back, into the car, and that’s when both officers opened fire.  The Houston Chronicle reports that “the car was riddled with bullet holes”. The photo from the Houston Chronicle, seen below, shows 10 distinct bullet holes.

Shephard’s body fell to the pavement, where it was covered with a sheet while investigators reconstructed and documented the action.

During the pursuit, Shephard had called 9-1-1 telling the dispatcher that he had a child in the car, and would harm the youngster unless Police backed off the chase.  That was an empty threat, as no child was found in the car. 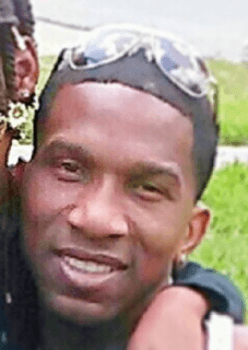 Shephard had a substantial criminal record, including robbery, aggravated assault with a deadly weapon, domestic abuse, and an outstanding arrest warrant for assault on a relative, that dated back to 2013.

KPRC-TV’s evening coverage of the story included the analysis of the chase by an 11 year veteran of the force, who made the case for the department to change the rules, and thereby preventing the two wrecks and even possibly preventing the fatal shooting. Department regulations do not allow for the “Pit” maneuver, or using current police lingo “tactical ramming” where one car will crash into the rear wheel of the fleeing car, causing it to turn 90 degrees and come to a full stop, with a second car in place to block the getaway.

There was also an opportunity to stop the chase while the suspect drove through the grass alongside the Beltway, away from any traffic or heavily populated area.

The shooting took place adjacent to the North Shore Middle School and James Havard Elementary. Both schools were placed in “lockout” status, where no one is allowed in or out of the building until the situation was resolved.

The intersection was flooded with more than 25 police units, including Houston Police, Harris County Sheriff’s Office and Constables. It was finally cleared and opened to traffic around 4 on Wednesday afternoon.