A Texas farmer finally received land back that was taken from him by a court and given to the U.S. Bureau of Land Management (BLM) more than thirty years ago. The victory puts land back into his undisputed possession and control that has been in his family since 1904. It also brings hope and a pathway to victory for other farmers who stand to lose up to 90,000 acres of land to the BLM.

Tommy Henderson met with BLM officials on the steps of the Clay County Courthouse in Henrietta, Texas, where he was presented a patent from the U.S. government bestowing rights to ownership and use of the property, according to an article by Lynn Walker in the Wichita Falls Times Record News. Henderson told the Times Record he hopes this will pave the way for dozens of other Red River land owners in Texas who are battling to keep their land from being taken by the BLM. 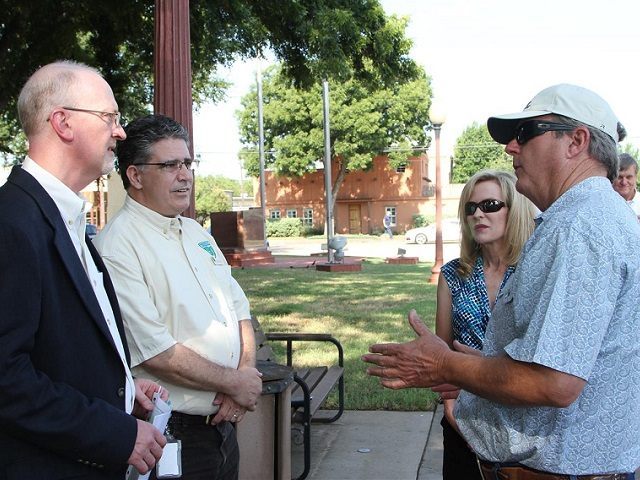 In a federal court decision in 1984, a judge stripped Henderson of ownership of a portion of his land located along the Red River in Texas. The Red River is Texas’ northern border with Oklahoma. Some of that land was given to the BLM and a small section was awarded to an Oklahoma man who brought the lawsuit. The Oklahoma rancher was attempting to claim land because of boundary changes due to erosion and evulsion.

Breitbart Texas brought national attention to the issue last April when the BLM was holding planning meetings on what to do with the land along the river they claimed belonged to the BLM. Texas’ leadership including then Attorney General Greg Abbott, then Lt. Governor David Dewhurst, then General Land Office Commissioner Jerry Patterson, and State Senator Craig Estes (R-Wichita Falls) joined with Texas’ U.S. Senators, John Cornyn and Ted Cruz, and U.S. Rep. Mac Thornberry to try to get the BLM to release the land back to the Texans who had believed they owned the land, in some cases for many generations. Then Governor Rick Perry weighed in on the issue in May when he said the “the federal government already owns too much land.” 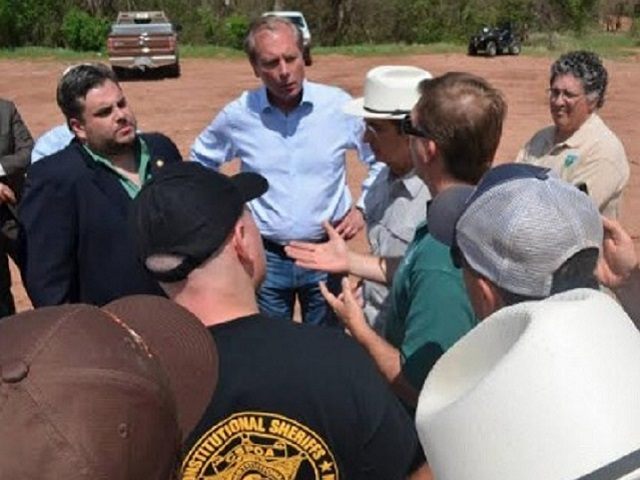 The signing of the patent between the federal government and Mr. Henderson, along with his statutorily required payment of $1.25 per acre, finalized the work that had been done since then and returned full control of the surface of the land to Henderson.

“It has been a long time coming,” Henderson told Breitbart Texas in a phone conversation on Friday. “The BLM brought me the patent and said this was the right thing to do, finally.”

Henderson actually began the patent process under “color of title” law several years ago. Unfortunately, the people he was working with moved on and the paperwork got lost in the process, Henderson told this writer. “During the planning meetings officials said “color of title” was a process whereby some landowners might be able to reclaim the land the BLM said they owned.”

Henderson inquired about the application he had already submitted. He was informed that paperwork had been misplaced. He decided to restart the process. “It took a long time because nobody knew how to do it,” Henderson explained. “No one currently working in the BLM had ever gone through the process and there had been a lot of changes in the law.”

Henderson explained that under current law, the land had to be checked for endangered species and other environmental issues. “That added several more months to the process,” he said. Other bureaucratic processes continued to pop up along the way.

Congressman Thornberry has been a persistent point man, Henderson said gratefully. He continues to work with Henderson and other land owners in the area. He told the Times Record, “It is good that Mr. Henderson was finally able to get back a portion of his land that he lost in the 1980s, but it never should have happened in the first place.”

“Three decades to correct that mistake is ridiculous,” Thornberry wrote in his statement.

Thornberry responded to an inquiry from Breitbart Texas and pledged to keep fighting the battle for the others involved. “I am continuing to pursue legislation that I introduced with Senator John Cornyn to protect private property rights and clear up the uncertainty that many landowners along the Red River currently face,” the north Texas congressman wrote.

Breitbart Texas previously reported that about 90,000 acres of land is currently in dispute with the BLM. Even Camp Perkins, a youth camp owned by the Northwest Texas Council of the Boy Scouts of America, was in danger of being swept away by the BLM. Henderson told this writer that his victory is one of the steps that should help Thornberry with getting legislation passed to help the other land owners.

“We’re pleased to have been able to help resolve the land ownership issue with Mr. Henderson,” wrote BLM spokesman Paul McGuire in response to an inquiry from Breitbart Texas. “The Color-of-Title Act is a useful tool for addressing situations where an individual appears to hold title to public land. If certain criteria are met, an applicant can obtain a patent conveying clear title to the lands by paying a fair and reasonable price that reflects current market value, discounted for taxes paid and any improvements to the land. Mr. Henderson’s application met the requirements of the Act. Others with land adjoining the federal corridor along the Red River may be in a similar situation, and we stand ready to review any valid applications.”

Henderson thanked all of the elected officials he had spoken with on this issue. He said he met recently with the new General Land Office commissioner, George P. Bush, in his office in Austin. He said Bush was very receptive and offered his assistance. Henderson told Commissioner Bush he appreciated the offer, but believed the process was moving in the right direction at that time. Henderson also singled out former Lt. Governor David Dewhurst for what Henderson called his dedicated involvement over the past decade in trying to find a resolution to this issue.

Henderson thanked the Texas Farm Bureau who stood shoulder to shoulder with him in this battle. He said their assistance was instrumental in the success of this effort.

Gene Hall, public relations director for the Texas Farm Bureau, responded to an inquiry from Breitbart Texas saying, “The Texas Farm Bureau is very pleased that Tommy Henderson was able to recover his land. We believe this shows that it is possible for the other affected property owners to resolve their issues with BLM as well. BLM is preparing for this process and we encourage all the landowners to contact BLM. Farm Bureau is also working on a legislative solution in Congress.”

Henderson praised the BLM region director, Steve Tryon, for taking the time to personally travel from his office in Tulsa, Oklahoma, to Clay County to hand deliver the patent and participate in the filing process. He told Henderson it was “one of the happiest days of his career.”

Henderson explained he never felt his battle was with the local BLM staff and management. Rather, he said, the obstacles always came from Washington, DC.

The facts of law are different in Henderson’s case from the other land owners because he lost his land through a court decision that even BLM officials told him was flawed. “They are trying to keep their land, I was trying to get mine back,” he said. “Now that the process for the color-of-title process to work properly, it should be easier on everyone else.”