A Waller County district judge ruled Tuesday that there will be no guns in the courthouse complex.

The ruling goes against the opinion of the Texas Attorney General who filed a brief in the lawsuit between Waller County and a gun rights activist. The judge also refused to dismiss the lawsuit filed by the County against the Second Amendment advocate.

Breitbart Texas has been following the controversy and the protests by gun rights groups over the right for concealed handgun license holders to have guns in the county building. The Waller County, Texas complex houses courtrooms and judicial chambers and court staff offices as well as the County Clerk Office and other county offices.

During the 2015 session of the Texas Legislature, Senate Bill 273 was passed to provide citizens a way to file complaints against cities and counties that unlawfully place 30.06 signs and interfere with the rights of licensed Texans to carry. Texas Governor Greg Abbott signed the bill into law.

Terry Holcomb Sr., founder of Texas Carry, sent Waller County a notice complaining that county officials were in violation of Texas law by excluding licensed to carry (LTC) holders, as reported by Breitbart Texas. Holcomb is a pastor and farmer who lives with his family in Coldspring, Texas in San Jacinto County.

Holcomb and the founder of the group Open Carry Texas, C.J. Grisham, have filed over 75 complaints against governmental entities in Texas.

Waller County responded to the filing of the complaint by filing a lawsuit against Holcomb. District Attorney Elton Mathis, who represents the officials in the county, says the law that allows LTC holders to carry in government buildings needs to be legally interpreted by a judge. He said that members of the County’s commissioners court are adamant that the safety of judges, prosecutors, lawyers, and staff be protected.

The parties in the gun litigation went back in court on Friday, November 18 but the judge made his ruling on Tuesday after hearing the arguments for and against having the guns in the complex.

The gun rights activist who started the fight told Breitbart Texas, “The ruling by the district judge in Waller County while not surprising should alarm us all. Essentially with a stroke of the pen, the Judge has declared open season on Texans’ First Amendment rights.”

Holcomb added, “Texans have a right to apply to those invested with the powers of government for redress of grievances or other purposes, by petition, address or remonstrance under Article 1, Section 27 of the Texas Bill of Rights, and to participate in government according to the law established in Local Government Code 411.209.”

Section 411.209 prohibits state agencies and political subdivisions from wrongfully excluding handgun license holders from property owned or leased by the government. The law prohibits a governmental entity from providing notice by a communication described in Texas Penal Code § 30.06, or by any sign expressly referring to that law or to a concealed handgun license, that a license holder carrying a handgun is prohibited from entering or remaining on a premises or other place owned or leased by the governmental entity unless the license holder is prohibited from carrying a handgun on the premises or other place by Texas Penal Code §§ 46.03 or 46.035.

Holcomb said, “Waller County has determined they will use the force of government to knowingly and intentionally oppress citizens rights to redress their grievances. The District Judge signed off, condoning the blatant behavior.”

The Texas Attorney General filed an amicus curiae brief in the litigation. AG Ken Paxton urged that “Both the law and sound public policy against the chilling of protected speech demand dismissal of Waller County’s claim [against Holcomb].” Paxton also argued that the Waller County court is without jurisdiction to determine the issue.

In August, the Texas Attorney General sent Waller County officials a notice that they were in violation of the law. The AG gave county officials 15 days to cure the violation and put it on notice that his office may file suit and seek $1,000 – $1,500 for the first violation, and not less than $10,000 – $10,500 for any second and subsequent violation. Each continuing day constitutes a separate violation under Texas law.

The AG filed a lawsuit on August 29th in Travis County, Texas. Austin, the State Capitol, is in Travis County. The AG says the Travis County district court where he filed suit “is where Waller County’s liability, or exemption therefrom, will be determined.”

At the hearing on November 18, Waller County presented evidence on the history of the applicable laws and showed the actual video evidence of the Texas Senate and House of Representative committee hearings. Mathis argues that the video shows that the legislators indicated that the whole purpose of changes to the law was to keep weapons out of the courthouse in its entirety.

Holcomb asked that the County’s lawsuit against him be dismissed because the County had violated his rights to free speech by suing him. The Judge disagreed and according to Mathis, essentially said that when you demand that the government take action (remove the sign and let you go into the courthouse with a gun) or where there would be consequences (filing complaints with the AG), it amounts to more than free speech. Holcomb argued that his rights were being violated.

The Court denied Holcomb’s motion to dismiss and for sanctions and filed a separate findings of fact and conclusions of law on these motions.

The judge dismissed Terry Holcomb’s SLAPP motion when the parties were in court.

The Waller County judge’s order and findings of fact and conclusions of law is attached below. The Court found that it had jurisdiction to hear the matter “because it is the county in which the principal office of the political subdivision claimed to be in violation of law is located, and the county in which the alleged violation of the law occurred.”

The judge also found that:

DA Mathis told Breitbart Texas, “We are glad to finally have this issue resolved and perhaps help in some way bring closure to an issue that has threatened the safety of the citizens of Texas all across our great state. County and municipal governments from the Panhandle to the Rio Grande have been inappropriately pressured to ignore the laws and ignore the wishes of the Texas Legislature on this issue. Guns are not allowed in courthouses except for very limited cases.”

Mathis explained, “The law is clear, the legislative history is clear, and the overwhelming consensus among Texas citizens is that law enforcement should be the only people carrying guns in courthouses. Courthouses are where we all come together in our communities. We come together to celebrate, we come to govern, we come to disagree. Inside places of such highly-charged emotional scenes are no place for firearms or weapons of any kind.”

The County DA added, “I appreciate the Texas County Judges and Commissioners Association of Texas, the Texas Association of Counties, the Texas Conference of Urban Counties as well as the Waller County Bar Association for stepping up to the plate and joining with us in trying to uphold the rule of law.” These organizations filed a friend of the court brief in support of the County and the judge noted in his findings and order that he considered the brief.

The judge ordered that “All costs of the Court expended or incurred in this cause are adjuged against the party incurring same.”

“The Waller County court has not only made a mockery of legislative democracy by gutting the plain language of the statute, but it has also exposed Texans to retaliatory lawsuits merely for having the courage to exercise their constitutional and statutory rights. I have no doubt that the court of appeals will reject the trial judge’s usurpation of law and apply the statutes as written,” AG Ken Paxton told Breitbart Texas. 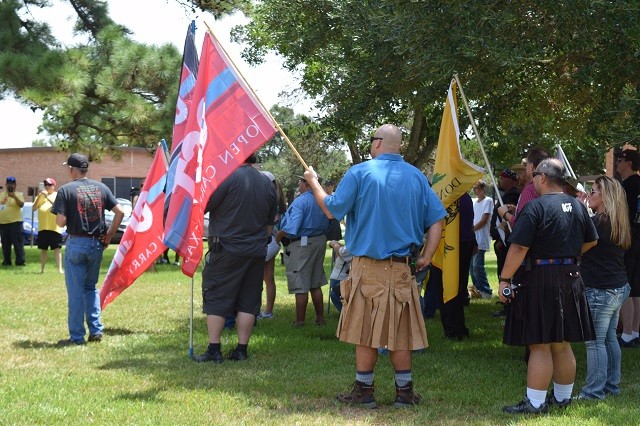 Holcombs says that he wants all Texans to know “I fully intend to fight this to the highest court necessary. We fully intend to stand in the gap between this oppressive local government in Waller County and the citizens of Texas. Edwin Walker with Texas Law Shield is already working on the appeal. If the tyrants in Waller County think they have prevailed, they are sadly mistaken. This will easily be turned over on appeal. I also intend to fully address this in the up and coming legislative session. If they want to behave like thugs then we will certainly treat them as such and get legislation passed to penalize such behavior.”

Breitbart Texas was in Waller County in August when gun rights advocates descended on Waller County to support their fellow Second Amendment advocate after he was sued by the County. During the open carry protest, they went to the Waller County Clerk’s Office to file their own complaints against the County.

Order in Waller County Gun Litigation by lanashadwick on Scribd